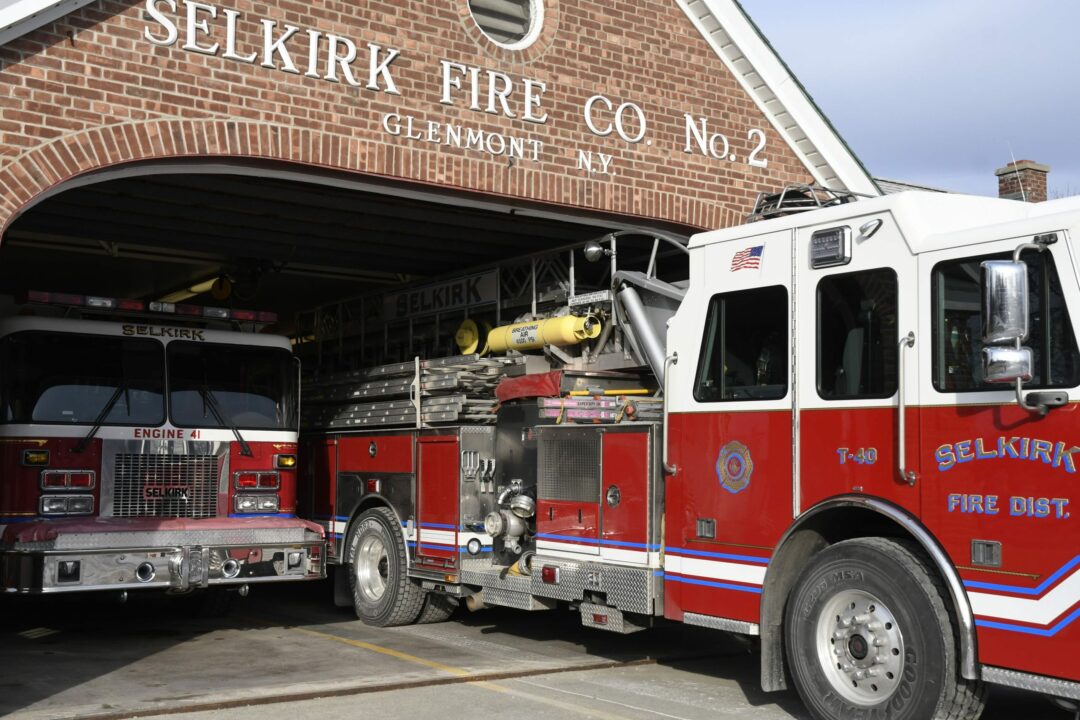 SELKIRK — The Selkirk Fire District’s Board of Commissioners are placing a bond vote on Tuesday, Dec. 11 in which the public is encouraged to vote on a $17.8 million project that would update its three outdated fire stations.

Working with Mitchell Associates Architects, the project entails the construction of a new headquarters station on district-purchased land along U.S. Route 9W beside Albertus W. Becker Elementary School, reconstructing its second station on 301 Glenmont Road in Glenmont, and improving its third station on 480 Bridge St. in South Bethlehem.

The districtwide bond vote allows the Selkirk FD to borrow the money necessary to complete this project although, according to sent-out press release on Nov. 16, some of the costs “will be offset by revenue generated from the sale of property and income from unused portions of the new property on Rt. 9W.”

For the average homeowner, it would cost them around $100 per year. Most of the bonds are 30-year bonds.

According to Selkirk FD Chairman Charles Wickham, this was the most cost-efficient avenue they could take now, after having done several reports and analyses into the fire stations’ safety and efficiency standards.

These comprised of the 2005-published Selkirk Fire District 2010 Report, the 2011 Manitou Study, and the Mitchell/FAC Report in 2017. Having consulted professional engineers and architects, these overall looked into the stations’ serving capacities, and outlined numerous recommendations for the future like buying new land to build the new headquarters building on, and better consolidating the fire district’s resources. They are available online for the public to view at http://selkirkfd.org/building-project/.

The project’s roots originated over a decade ago when the firehouses increasingly felt more inadequate to efficiently handle its firefighters, fleet of fire trucks, and other needed services.

Issues mainly concern firefighter safety and the stations’ outdated architecture, which may result in lower recruitment rates in the future.

Concerning the latter issue, Wickham said, “We’re scared because if somebody gets hurt, it’s not going to be a bruise. It’s going to be serious. Someone can get killed very easily, like first getting their foot stuck, or tripping and falling, or getting run over.”

Among the several reasons why the fire stations have felt substandard in recent years is because they were originally built in a much different time period, which represents different architectural and design standards, much smaller firefighter apparatus, and how they’d served a much smaller town population then.

Station 1, located on 126 Maple Ave. in Selkirk, was originally built in 1928. Station 2, in Glenmont, was developed in 1952. Station 3, in South Bethlehem, was erected in 1956. Now, with over 50 volunteer firefighters serving almost 2,500 homes across a 32 square-mile radius, this explains why the stations’ outdated architectural designs are troublesome today, whereas they seemed ideal in the past.

Also, fire trucks and firefighter apparatus have also physically grown larger than they used to be back in the mid-20th century, and this issue is evident when observing how the small fire stations feel too tight to store the vehicle fleet and necessary equipment.

Also, as the town population has grown through the decades, the fire stations and their apparatus have received updates to try to keep up. “But now, we’ve come to the point where we can’t keep on updating, and straining our trucks and firefighters,” Wickham said. “It’s time to start from scratch and do a major update.”

During a personal tour of Station 1, Wickham showed a 1920s-era fire truck, which was one of the Selkirk FD’s original vehicles back when it first started serving in 1928. But since Station 1 was physically too small to proudly present that truck to the public in a more open-area setting, that truck is left hidden in a garage-like structure inside, away from the public’s view.

“The new project plans to have a more open space to show off this original fire truck to the public so that they can see how fire trucks used to look like then and admire its design,” Wickham said. “It’s tragic and unfortunate that for now, we’re forced to leave it inside that room.”

Prior to the Dec. 11 bond vote, there are two scheduled public meetings where residents can come down to better understand what the project is, why it’s important, how it would affect them, and even speak with Selkirk FD members in person.

“We want to be forthright with [the public] and we do realize that the project cost is a big number but we want to be honest with them,” said Wickham. “We always want to be as transparent as possible with everyone.”

Finally, residents can vote on the project on Dec. 11 at all three fire stations, with polls open from noon to 9 p.m.

“We want to make sure as many people can come down to vote because maybe at a certain time like 1 p.m., someone can’t come because of work,” Wickham said. “This project is very important and we want them to be informed before they vote.”

For more information and updates regarding the project, visit www.selkirkfd.org or send an email to [email protected]