People take to the Rail Trail to enjoy the fall foliage, and it’s good for local business 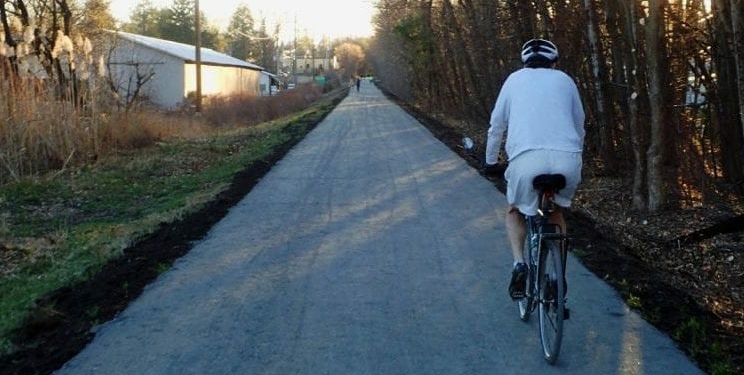 A bicyclist on the Albany County Helderberg Hudson Rail Trail approches Delmar’s Warehouse District on an autumn day. Local businesses are seeing more people visit them by means of the Rail Trail, and could see more in the coming weeks. Spotlight file photo

This week, nature will dazzle leaf peepers with as fall foliage is expected to reach peak in the Capital District this week. And, they will likely stop at local shops, too.

Scores of residents will hop into their cars to visit scenic locations enjoyed by generations past, but the Albany County Helderberg Hudson Rail Trail has developed into an equally attractive stop since it opened a few years ago.

The rail trail corridor is once again a means to attract residents and consumers to the towns in which it runs through. More than 200,000 people walk, jog or bicycle down all or a portion of its nine-mile length each year. The old Delaware and Hudson line once connected farming towns with Albany. It helped towns grow and allowed town residents to commute back and forth to jobs in the city. Community leaders and the business owners whose storefronts now neighbor the trail are well aware of that kind of traffic.

“I’m seeing opportunities, too,” said David VanLuven, Bethlehem’s town supervisor. “We’ve already established a few connectors from the rail trail to neighboring streets. Some are official, some will hopefully be more official in the future.”

The first-year supervisor pointed out the path etched out from the trail to the Stewart Shop next door to Veteran’s Memorial Park in Delmar. Trail-goers can access Veterans Memorial Park, too, as well as Fireman’s Park in Slingerlands. Much of the trail is quiet and wooded, and part of the trail offers views of an adjacent creek. There are various points in which visitors can park and visit the trail, including on Hudson Avenue in Delmar, on Bridge Street in Slingerlands and on Grove Street in Voorheesville.

That foot traffic has inspired growth in local business.

Fitness, their Delaware Avenue juice bar, soon. The two partnered up with the idea after learning Delmar Health Hut was closing its doors at 278 Delaware Ave. The storefront, as one would expect, faces Delaware Avenue. It stands, however, just a stone’s throw away from their target audience — walkers.

The juice bar will provide a respite for those traveling along the rail trail, as well as a haven for anyone who wants a healthy treat, to do some guided meditation or to simply sit outside on a nice day. It will offer healthy juices and smoothies, as well as salads and simple grab-and-go sandwiches and wraps. There will also be yoga classes, meditation sessions throughout the day and a kiddie corner for children.

“Katie and I are both entrepreneurs and health enthusiasts,” said Slattery, “but, most importantly, we’re first and foremost mothers and we know the importance of a good potty break.”

Town and county officials have been supportive of local businesses surrounding the trail. The town awarded Slattery and Dievendorf with a $25,000 microenterprise grant last September to help launch their juice bar. The two are also working with Albany County to install a defined footpath directly from the rail trail. Town Hall said it is talking with the county about creating virtual tools to assist with accessibility and promotion.

“I want to further connect rail-trail users with area businesses,” said VanLuven, “with maps or an app or something that will tell people where they are and where they can get food, shop and go to the bathroom. The county’s interested in this, too.”

Countless of footpaths spider-web from the trail to sideroads throughout town. Such a path exists at the end of Grove Street in Delmar’s Warehouse District where people presumably branch off to visit the cluster of businesses in and around Four Corners. Mike Bellini, co-owner of Real McCoy, started a nano-brewery there three years ago.

Bellini said most people may not be able to tell you where Hallwood Road is, but that doesn’t stop people from finding him. He said, the rail trail helps. He noticed its influence this summer upon his storefront’s busiest day.

“There were probably 150 people, just spread out everywhere, and there were about ten cars in our parking lot,” said Bellini. “But, there were probably 30 bikes, and ten strollers, because everybody walks here. They walk from home. They come off the trail. Or, they’re riding their bikes.

MOVIE REVIEW: Gaga, Cooper — two stars have been reborn through uncharacteristic roles in ‘A Star is Born’