Bethlehem Planning Board ponders its first-ever application for ducks 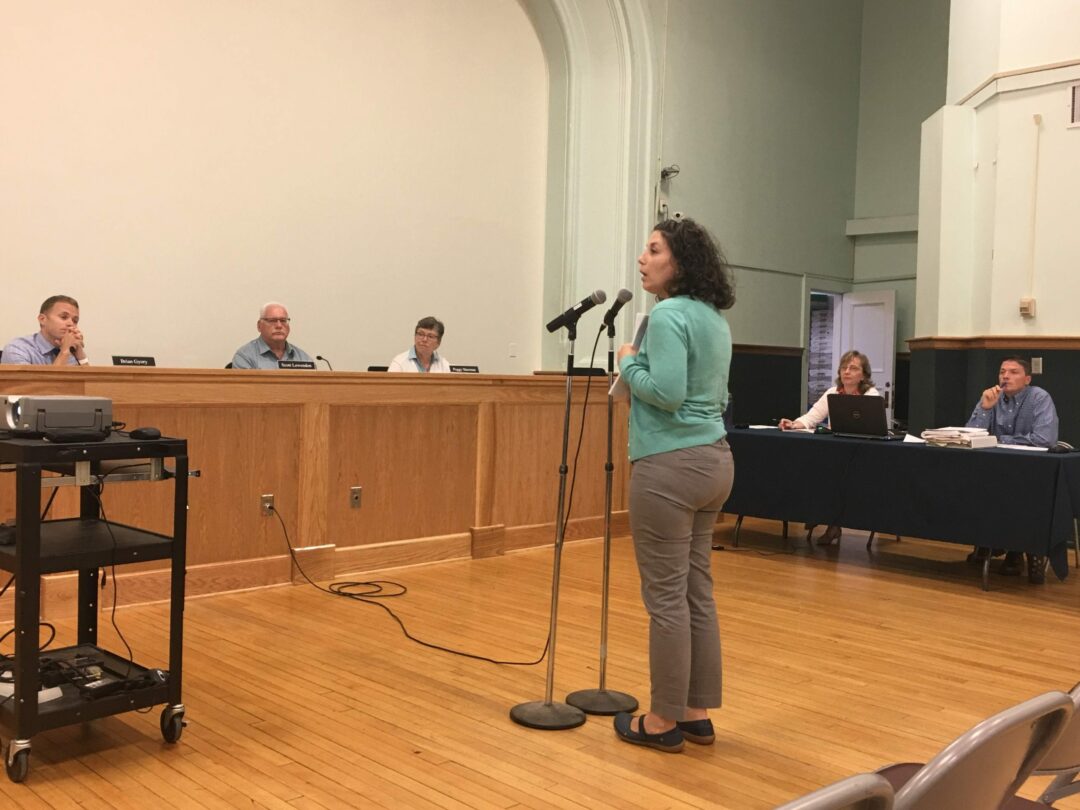 Victoria Russo, above, brings up benefits of keeping backyard ducks to the Planning Board Members. Diego Cagara / Spotlight News

BETHLEHEM — Two Delmar residents are seeking permission to legally raise three ducks in the backyard of their residential property on Harrison Avenue as pets, for help with pest control and to foster egg production, which would be classified as “agricultural use.”

The residents, Victoria Russo and Matt Galletta, appeared at the Planning Board Meeting on Tuesday, Sept. 18 at 6 p.m. to discuss their proposal, answer PB members’ questions and seek eventual approval.

This is the first site plan application that concerns ducks in terms of agricultural use under the Town Zoning Law: Chickens are the most common animals in this category. The residents’ property takes up about 0.2 acres and is in a Core Residential-zoned neighborhood in which the Planning Board can approve applications for agricultural use.

The Planning Board has noted that ducks are counted within the Town Code’s term, “poultry.” New York Agriculture and Markets Law also finds that ”poultry means any domesticated bird,” under Section 96-Z-21.

“We ended up to go with ducks instead of chickens for a few reasons,” said Russo. “My husband and I found that they tend to be cold-hardy to survive the climate we’ll have here, they tend to be less susceptible to illness than chickens, and their impact and standards for being taken care of on our property is comfortable.”

She also said that unlike chickens, ducks are flightless and cannot roost up high in trees. Not needing a pond, they will have water bowls within their pens and can easily clean themselves by ducking their heads in to “clean out dust from inside their nostrils,” unlike chickens which require a pool of water.

Russo said that the planned ducks’ pen, which will be completely enclosed by a fence attached to it, will be directly behind their house, measuring 8 feet wide by 8 feet long. She acknowledged that the pen needs to have a minimum distance of 25 feet from any residential structures on neighboring properties. Two of its sides and its roof will be solid to “protect them from wind, elements, rodents and also predators while allowing ventilation. It would also dampen the sounds they would make.”

The ducks, their eggs and manure will not be slaughtered or sold. The pen would be cleaned and maintained regularly too.

Planning Board members also learned about other benefits of having backyard ducks, including how they can reduce the household’s food waste by consuming leftovers; battle garden pests like eating snails and beetles; turn over garden soil with their bills to enhance it while also searching for insects; their manure can help fertilize garden soil; and they can produce fresh, nutritious eggs in an environmentally-sustainable manner.

Planning Board Member Scott Lewendon brought up a one issue — the potential noise pollution the ducks would cause — to Russo, acknowledging that the applicants should be aware that neighbors have expressed concern about that.

“The duck is certainly quieter than the rooster, which we’re not allowed to have because of their noise levels,” said Russo. “The neighbors are probably comfortable to our chickens whenever they walk by our property as they can hear a little bit of their clucking, but it’s not exceptionally loud. Ducks are certainly also not as loud as the dogs barking in the neighborhood that people can hear.”

Russo suggested they can put up some more trees and grow more vegetation around the pen to muffle the noises the ducks could make.

Also, she quickly pointed out that ducks are not loud at all during evenings and nighttime.

Fellow Plannng Board Member Brian Gyory then asked if natural predators like a neighboring cat or a bird from above would try to harm the ducks, which would also cause noise.

“The ducks tend to get quiet when they get nervous and draw as little attention to themselves as possible,” she answered. “One time, people from the power company were trimming trees in the backyard, and the ducks went inside their pen and were completely silent due to their fear of encountering predators.”

Russo also believed that having backyard ducks would not reduce their property value since she is aware that several neighbors own chickens and there has not been a negative economic effect from that.

Eventually, Planning Board Members motioned to table the application for a future meeting so that the applicants can return with more research and information about raising backyard ducks as well as look through their site plan again.

EDITORIAL: A place in the neighborhood