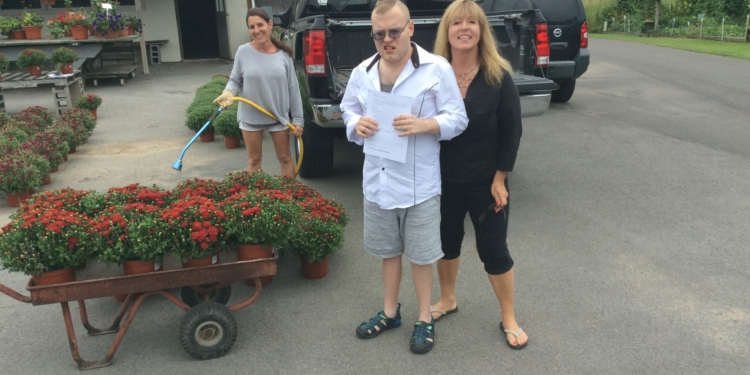 SELKIRK — It’s normal for parents to watch their teenage and young adult children get jobs so they learn how to earn and attain valuable life skills, such as communication and time management. But that rite of passage becomes challenged for families who have a member struggling with autism spectrum disorder (ASD).

While Lisa Marsh, 56, was aware that ASD may put her 20-year-old son, Thomas, behind everyone else, she refused to give up and reached out to Joanne Penesso, the general manager of Kolbers Farm on 916 Route 9W in Selkirk, to see if she would allow Thomas to volunteer for a day there as a work project.

The National Institute of Mental Health defines autism spectrum disorder as “a developmental disorder that affects communication and behavior. Although autism can be diagnosed at any age, it is said to be a ‘developmental disorder’ because symptoms generally appear in the first two years of life.”

The American Psychiatric Association finds that people with ASD have a hard time communicating and interacting with other people, have restricted interests and repetitive behaviors, and show symptoms that limit their functionality in everyday environments, such as school and work.

Some symptoms include: sleep issues, irritability, avoiding eye contact, struggling to converse, getting agitated when a routine gets changed, and having a specific sensitivity to sensory phenomena including light, noise and temperature. Conversely, people with ASD may also succeed in math, science music or art, be great with learning through visuals and audio, and recall detail-oriented information for an extended time period.

On Friday, Aug. 31, Lisa wanted to give her son the opportunity to experience working at a local farm for a day, something she felt would benefit him personally and professionally.

volunteer to work that day would give him a qualitative experience in terms of meeting people and getting work done. Thomas’ main objective was to help deliver fall mums — the nickname for chrysanthemums — to locals who ordered them, which is among the most popular flower type in the fall.

So on Aug. 31, beginning at 10 a.m., the mother-and-son duo spent up to six hours collectively delivering 21 orders of 63 mums.

“Thomas helped pick up mums from my parking lot, load them onto a truck and deliver them to people around town who ordered them,” Penesso said. “Lisa had to drive the vehicle though.”

Lisa said that it was “a very good learning experience for him where he needs to focus more on time, responsibilities and awareness of the job. A farm environment is hands-on, low-key, more focused and quiet, which is beneficial for people on the autism spectrum as they feel challenged when things are louder, busier and complicated.”

She added that Thomas was hence able to focus on the mums’ color, the amount and who ordered them. He received neither outside help beyond his mother nor a paycheck for this work project. However, Lisa noted that Thomas sometimes had difficulty maintaining eye contact with people and tended to turn away during conversations.

Penesso chimed in and believed that the experience did help Thomas  build his confidence, push him to interact with the public and “he felt like he mattered in this job.”

“People on the autism spectrum are people too and they shouldn’t be left stuck and medicated in a room by their families,” she said. “They have God’s spirit and need to learn about life skills as much as everyone else. It may take longer, but it’s great to have patience and compassion. It’s good to let them out in the open and participate in life events.”

Appreciating Lisa and Thomas’ hard work for the day, she expressed gratitude as running the farm by herself can be challenging too since there are many pressing tasks like answering phones, farming and coordinating deliveries.

Penesso had to learn how to run Kolbers after its previous owner and her stepfather, William Kolber, died in late 2015.

She also said that Lisa “went the extra mile as a saleslady because she created a flyer about the mums for locals who ordered them. It gave them some more information about the mums and the farm, which can encourage them to stay connected with us.”

On the other hand, Lisa acknowledged that many local part-time jobs can be undertaken by people with ASD, giving them an opportunity to find work.

She also expressed hope that both the Bethlehem and Ravena-Coeymans-Selkirk central school districts and the Capital Region BOCES (Boards of Cooperative Educational Services) would establish a either a summer- or year-long program to help people with ASD prepare and find employment or work projects.

Examples she gave included cleaning windows, tidying offices, setting silverware up with napkins in a restaurant environment, riding with supervisors and packaging boxes.

According to Lisa, Thomas had been “mainstreamed” into the Ravena-Coeymans-Selkirk Central School District, before he was placed into the BOCES program and then the Wildwood YAP (Young Adult Program).

While BOCES provides services for students with disabilities, Wildwood YAP aims to enable Thomas to learn and practice more everyday life skills including communicating with peers and working.

“It’s very important for family and friends to support people on the autism spectrum and they need to focus more on the positives than negatives,” she concluded. “The support that you need is unbelievable and it is an everyday task. It’s not something that’s going away. It’s like when you’re taking care of an elderly person, they’re eventually going to pass and you’re going to be relieved of that responsibility.”

“But with [ASD], this is something that’s 24/7 and they’re going to grow up and become an adult, but they’re still going to need support. And that’s where family and friends come in.”

A look into Proctors and its founder