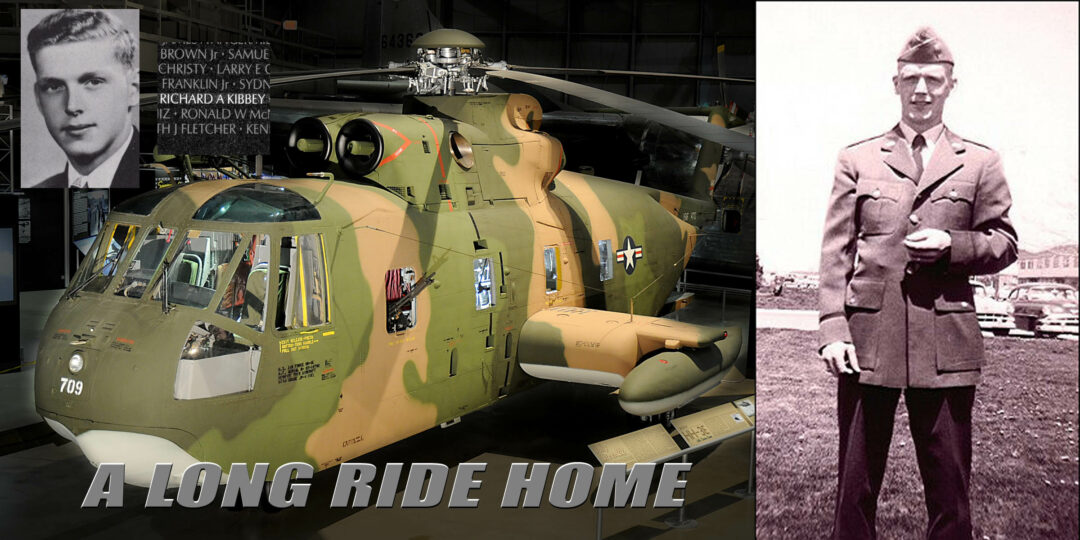 Roger Kibbey remembers his big brother Richard through the eyes of a kindergartner.

“I do remember a little bit,” he said. “When he was going with Mary Ann Foss… Once in a while, they would take me out. I was just so small. I don’t remember, [but] I looked up to Dick. They’d say, ‘your big brother is in the Air Force and flies jet planes.’”

Richard was the eldest of four children — all boys — born to Oren and Mildred Kibbey. The family lived on Borthwick Avenue in Delmar. Like his younger brothers who followed him, Richard graduated from Bethlehem Central High School. He lettered in baseball, track and football. The Eagles went 6-1 in his final year on the gridiron, good enough for a share of the division title. His best friend Lou Unright received more accolades from athletics than he did, however. Richard excelled more in the classroom. Once he graduated in 1952, he went on to pursue a science degree at Rensselaer Polytechnic Institute in Troy. He married Foss in 1954.

“I still picture him with the old engineer boots and the dungarees raised up four inches,” said Roger. “That’s how I sort of remember him.”

Three years later, Richard was commissioned to the Air Force. His brother, Robert, would follow him into the Air Force, too. Ronald pursued a degree and later took on a teaching job in Ballston Spa. Roger, the baby brother, enlisted in the Marines in 1963.

Oren and Mildred Kibbey would ultimately see three of their four boys go off to military service. Two returned, but one did not. Richard was categorized as Missing in Action in February 1967 after the helicopter he was co-piloting was shot down over North Vietnam. Last week, his surviving family learned his remains had been found, and that he’s coming home.

“I’m sort of mixed [with] feelings,” said Roger, less than three days after learning of the news from his nephew, Richard Jr. He recalled how his big brother Richard was able to “pull a few strings” to give Roger time off and visit him in Utah before being shipped to Southeast Asia. Otherwise, most of the interaction he remembers having with his big brother took place through “hit or miss” encounters while the two were in service. “There were situations where I ran into him in California pulling war games,” said Roger. “When I was in Okinawa, he would fly into Okinawa. And, when I was in Vietnam, he would fly into Vietnam. Just a hit or miss, seeing him. But, I’ve worn his bracelet ever since.”

On Roger’s wrist is a silver-colored bracelet with his brother’s rank, name and the date in which he was listed as MIA. The issuance of the bracelet was a grassroots effort started in 1970 by people looking to ensure soldiers listed as MIA or Prisoners of War would not be forgotten.

Steve Riedel remembers the name. Once the commander of the American Legion Post 1040 in Delmar, Riedel searched the names of those listed as MIA for the annual Memorial Day parade, “so I could mention them at the memorial ceremony,” he said. “His was the only one that really came up.” Though other names appeared, Richard’s “stuck with me because it was a name from the neighborhood I used to live in. I had always known that the guy was missing. I’ve always known that he’s on the wall.”

Lee Teter’s painting “Reflections” hangs on the back wall of Joe Bruno’s Delmar barber shop on Delaware Avenue. It captures the moment of one man, but it’s a feeling shared by many. A middle-aged man stands in front of the Vietnam Veterans Memorial. More than 58,000 names were etched into its black marble, which reflects back onto those who look upon it. In Teter’s painting, however, the man’s reflection is replaced by a group of young men. His outstretched hand touching the wall is a common sight for the nearly 3 million people who visit it each year. Bruno is a veteran of the Vietnam War. That’s where he earned his Purple Heart.

According to military reports, then Capt. Richard Kibbey was the co-pilot of a Sikorsky HH3E “Jolly Green Giant” on Feb. 6, 1967. He was joined by pilot Major Patrick H. Wood, flight mechanic SSgt. Donald J. Hall and pararescueman A2C Dwayne Hackney. The crew took the lead in a rescue mission to retrieve Air Force pilot, Capt. Lucius L. Heiskell, whose single-prop O-1F “Birddog” was shot down over the Mu Gia Pass near the Laos and North Vietnam border.

The Mu Gia Pass was one of two major arteries to the Ho Chi Minh Trail, a pathway that meandered through mountains and thick jungle that was used to supply enemy forces. Between April 1965 and December 1971, 43 American airman were downed and later listed as either missing or captured. Richard Jr. said it was his father’s first mission in the Jolly Green Giant.

Capt. Heiskell was the lead plane running forward air control. It was to ensure a pending air strike would not hit friendly troops. Shortly after identifying a target, described as an underwater bridge, his plane was hit by enemy gunfire. The horizontal stabilizer was damaged. He lost control and radioed in that he would have to bail out. The air strike then turned into a search and rescue mission.

Two F-4s “Phantoms” joined the scene. Shortly after Capt. Heiskell touched down, he radioed he was gathering his parachute. The enemy knew where he was and they were fast approaching. Several minutes of radio silence followed. Another burst of anti-aircraft fire was shot near where the pilot’s parachute disappeared. The accompanying Birddog turned away to avoid fire.

Several more minutes passed before Capt. Heiskell could be contacted. Richard’s Jolly Green Giant, known as Jolly Green 05, descended through holes in the thick clouds hanging low over the valley. He was quickly retrieved, and the rescue crew proceeded south as it looked for a break in the clouds for safe passage. A minute later, the pilots in the surrounding planes observed “extremely heavy and accurate” gunfire directed towards Richard’s helicopter. The Jolly Green Giant was hit and the engines immediately caught fire.

Richard’s helicopter continued to race south as flames streamed out from the engines directly underneath its rotor blades. A mile into the flight, Major Wood radioed the whole aircraft was engulfed in flame. The report states that a moment later, “other pilots and aircrews watched in horror as Jolly Green 05 flew directly and perpendicularly into the karst outcropping at a high rate of speed.” The impact caused flaming wreckage to scatter “everywhere.”

A 10-minute, low-level search over the crash site revealed two deployed parachutes, then a smoke flare was observed. It was A2C Hackney, a member of Richard’s flight crew. The impact of the helicopter crash blew him out and into safety. The other parachute was Capt. Heiskell’s. He could not be found.

Richard was listed as MIA, as was Major Wood, SSgt.Hall and Capt. Heiskell. Because of the intensity of enemy activity in the area, no other search was conducted.

Richard was subsequently awarded the rank of Major. Once the Air Force changed his status from MIA to Killed in Action, Richard earned the rank of Colonel.

“The guys who serve are always going to remember those people,” said Reidel, of the 1,350 Americans listed as prisoner of war or MIA from Vietnam, and approximately 1,200 servicemen reported killed but whose bodies were never recovered. Reidel, who served in the Marines, described the “special bond” shared between war veterans. “You relied on him to protect you, and he relied on you. Some of these guys are probably out there thinking to themselves, because he didn’t come home, they failed him.”

In the years that followed, the Kibbey family received the occasional correspondence from the U.S. Government. Details of the mission were shared, but no evidence of his whereabouts could confirm whether he died in the crash or survived and was held captive. Richard Jr. told the Orlando Sentinel last November that his mother continued to send care packages overseas. Nearly four years after he was lost, Mary Ann pleaded with RPI students to send letters of compassion to the Vietnamese government.

“Unless you are close to a prisoner, it is difficult to imagine what the families go through,” she wrote in December 1970. “But, think for a moment! What if a prisoner was your husband, son or father? … I’m either a widow or a wife.”

Mary Ann never remarried. Richard Jr. stated on virtualwall.org that his mother never wanted to let go. He recalled how his mother and father were “perfect parents like June and Ward Cleaver.” Ultimately, she would give up hope. In 1978, Richard’s status was changed to KIA. The decision allowed the family to collect life insurance benefits, but Richard Jr. stated it gave his mother the finality she needed. She died shortly afterward from what he called a broken heart.

“It’s a touchy subject,” said Darrin Kibbey, Richard’s nephew. Darrin never met his uncle. He was born after his helicopter went down. Still, he helped carry the torch for the family. He’s carried the black MIA/POW flag through Memorial Day parades and worked with the Tri-County Council of Vietnam Era Veterans to erect the Gold Star Families Memorial Monument in Albany’s LaFayette Park. Each year, he goes to Washington, D.C. to visit the Wall.

In the 24 hours after learning that Richard’s remains had been identified, he described a torrent of emotions. “It’s kind of like, I’m happy about it, you think about it, then you’re sad. Then you’re kind of like, it’s closure. Then you’re like, I wish that my grandmother was alive, and then you get sad [again]… . I can’t even imagine, candidly, what’s going on with my dad and his brothers.”

Though Roger joined the Marines after Richard was enlisted into the Air Force, he was the first of the brothers to go to Vietnam. He was assigned to the Marines 3rd Division and arrived in Vietnam in 1965. Richard later requested assignment to Vietnam. When Richard went missing, Roger said he felt guilty. For years, he believed he forced his brother’s hand to follow him into the war.

“As a kid, you think younger brother goes off to Vietnam to fight in the Marines, I’m oldest, maybe I should do my duty,” he said. “I had that guilt feeling.” It wasn’t until he shared these thoughts with Richard Jr. that he learned that there was an incentive to climb rank by going to Vietnam. “That took the guilt off of me,” said Roger.

A return ceremony at Andrews Air Force Base is expected. The family hopes to have Richard interred at Arlington National Cemetery.

“For [Richard] Kibbey, his tour is finally ending,” said Riedel, who said he found it “reassuring” that there is still an effort to return soldiers home. “For the guys who are still in [service], that’s one of the things they’re concerned about. Is anybody going to care about me if I come up missing?”

In his Greenville home, Roger holds on to mementos of his big brother. There are his service medals and his landscape paintings— “little connections” that tie him to Richard. He still covets a patch from his squadron. And, there’s the silver bracelet around his wrist.

“That’s my attachment to Dick,” said Roger. “I’ll never give that up. That will always stay with me.”

Jim Franco and John McIntyre contributed to this article.