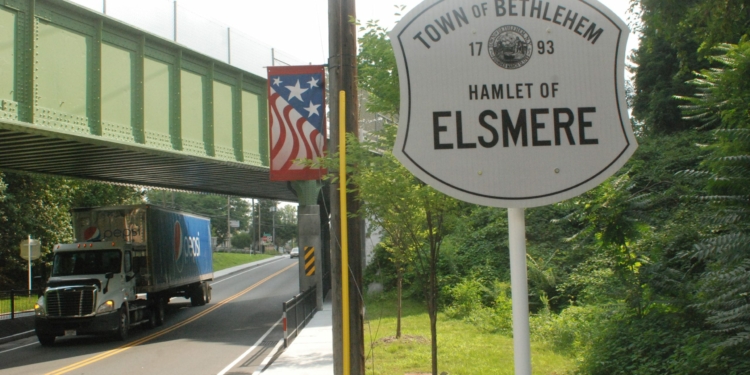 BETHLEHEM — The recent installation of two new hamlet signs on either side of the Albany County Rail Trail has stirred curiosity among local residents.

These simplistically-designed signs help inform pedestrians and drivers alike that they are entering either the hamlet of Delmar or Elsmere. They also list that the hamlets belong to the Town of Bethlehem, as well as the town’s overall founding year: 1793.

While they appear innocent and straightforward, they represent a tiny portion in sign designer Mark Joseph Kelly’s hopeful plans.

Kelly, 62, is a marketing and brand consultant who envisions that at least 22 similarly-designed signs would stand across Bethlehem to signify where each hamlet is.

He hopes that these signs would help residents to feel more “proud of where they live … and also help people understand where they are, because there are some people who don’t even know where they exactly live.” He wants the signs to help the local community grow closer, given how there are many hamlets within, and to educate people about the hamlets’ varying historical backgrounds.

“The signs are meant to be not flashy, they’re designed to be austere, and look historical,” he said. “They’re in black and white, they’re as clean as they can possibly be so, from a fabrication standpoint, they’re as cost-efficient as I want them to be. The poles are very simple too and the overall budgeting for the project won’t be very overwhelming.”

Kelly brought up an analogy where he said that some residents who technically don’t live in Albany (like in Saratoga, Rensselaer and Schenectady) still say they live in Albany, when asked about their residence. This phenomenon happens in Delmar too, as Kelly believed that it’s “because Albany is a brand, it’s the state capital.” He also said that people would generally recognize where Albany is more than Delmar, especially by those who live beyond the Capital District.

This is one main reason that motivated Kelly to give each hamlet its own distinct identity and to-be-clearly-signed border.

He also gave the example of when traveling through the state of Massachusetts, “the signs for the small villages and towns there are no bigger, no smaller than the signs for Boston and Springfield. That’s the same standard we’re trying to

implement here and everyone should have the right to feel equally proud of their neighborhood.”

“No matter where you would go, the hamlet signs will be of the same size. Delmar would not have a bigger sign than Mallorys Corner, for example,” Kelly said. “The message behind that is fundamentally important, in that not one hamlet is much more important than the other. This again, relates to helping the community grow closer.”

The project’s roots originated around a decade ago, when the Delaware Avenue Enhancement Committee was formed, to address potential improvements to the local area that road passes through.

“That committee had a local citizen component, and I volunteered to join the board,” Kelly said. “Part of that initiative was to develop a monument sign that was incorporated into the design plan, which was meant to be the gateway sign into the Delaware Avenue Enhancement area. It would have been a sign for just Delmar. But I made a suggestion to establish a design program that would help educate people about where all the hamlets are instead.”

He favored this 22-hamlet-signs program over that proposed Delmar monument sign, “because the entire town would now get to share in a pride of neighborhood. Delmar, after all, is just one hamlet out of around 22 hamlets in the Town of Bethlehem.” They would also promote several hamlets that are not as well-known, such as Mallorys Corners and Spawn Hollow, according to Kelly.

He hopes to work with local school districts to create a historical program where students can learn about and honor each hamlet’s history and significance. Furthermore, he wants to have the sign project be available on the town’s website for people to get more information and perhaps have a walking guide from each hamlet to the other.

Currently working with town historian Susan Leath, Kelly is finalizing a list of hamlets now that will have a sign to mark their location. He did note that several hamlets have become defunct, hence updating the list is of paramount importance. As of early August, hamlets on this incomplete list include Beckers Corners, Cedar Hill, Houcks Corners, Meyers Corners and Wemple.

There has been some underlying friction among locals throughout the years though, as they dispute over where they believe the true borders of hamlets lie, possibly stemming from their backgrounds and upbringings.

Instead of being concerned about this, Kelly conversely acknowledged that this hamlets-sign project would “help define the hamlet borders. It’s why we’re doing this, and it would benefit the lesser-known hamlets particularly.” To further address locals’ concerns over where hamlet and town borders are, he said he is open to possibly “do it the old-fashioned way and go out and talk to people.”

For now, Kelly is continuing to determine where sign poles would be located (since they are on public ground) and finalizing the aforementioned hamlet list.

The current two signs for Delmar and Elsmere were funded as part of Delaware Avenue street budget, according to Kelly, whereas he anticipates grants from sources like the town and county for future signs.

“It’s one of those rare opportunities where you can do something really inclusive and that it is not some massive capital project. It’s manageable.”