Bethlehem is one step closer to tightening traffic on Delaware Avenue 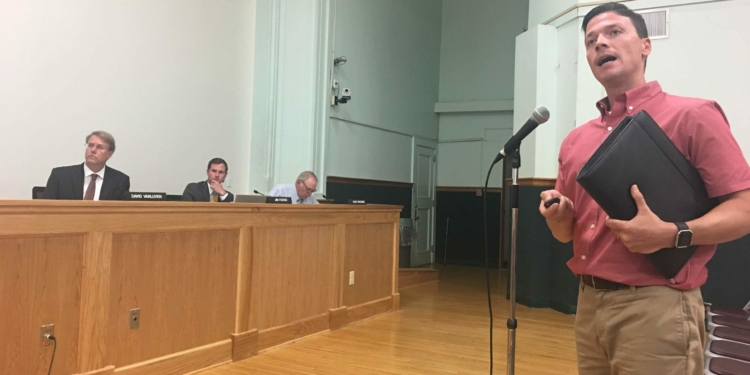 ELSMERE — After some discussion amongst its members, the Town Board approved an application to secure funding that would eventually help improve Delaware Avenue through its Road Diet Project, an endeavor which many locals support, on Wednesday, Aug. 8.

While Delaware Avenue has been known as a major road for the town — around 15,000 to 18,000 vehicles use the road daily, it has been criticized for being unsafe for motorists, bicyclists and pedestrians alike. The project mainly concerns the stretch of Delaware Avenue from just before its intersection with Elsmere Avenue to the Normans Kill Bridge. Areas of interest that are located by or near that stretch include the Elsmere Elementary School and Delaware Plaza.

While there are sidewalks on either side of the road, there is little buffer to separate pedestrians from the vehicles whizzing by. There are also no safe crossings between signalized intersections, a major hazard for pedestrians as many motorists now operate their vehicles while distracted by their mobile phones or other devices.

Known officially as the Delaware Avenue Complete Streets and Road Diet Project, its goal is to slow Delaware Avenue traffic by using a combination of a road diet and lowering the speed limit from 40 miles per hour to 30 or 35. In addition, marked crosswalks would align with relocated bus stops, and raised pedestrian refuge islands would be built, and rectangular rapid flashing beacons would ease both pedestrian and motorist traffic.

A road diet, also called a three-lane roadway, is a two-way left-turn lane where a center lane is built to exclusively allow vehicles to turn left from. Hence, it would make a driving journey less hazardous and more smooth.

Robert Leslie, director of planning, appeared before the Board to give a brief overview of the project while also listening to attendees’ comments.

He said that his team has reached out to the New York state Department of Transportation (NYSDOT) upon learning that this project is eligible to receive grants from NYSDOT’s Transportation Alternatives Program (TAP) and Congestion Mitigation Air Quality Improvement Program (CMAQ).

“We have utilized Creighton Manning to put together a detailed cost estimate,” he said on the Albany-based traffic engineering and surveying firm. “One next step is getting a verification letter from the town supervisor [David VanLuven] which is needed to be included as part of the grant application.”

The total estimated cost is $5.2 million, $1.56 million of which will be provided by NYSDOT through pavement preservation funds, $2.912 million will be federal funds, and $728,000 will be local funds. VanLuven, who headed the meeting, learned that awards notification is expected around this December.

The project was developed from how many locals were concerned about the unsafe traveling conditions on and around Delaware Avenue, and based on a five-year study and collected data about the road’s safety conditions. Or lack thereof.

“Our committee has been involved in this project for many years and concerned for the safety of pedestrians and bicyclists on Delaware Avenue,” said Henry Peyrebrune, a Delaware Avenue resident and member of the town’s Pedestrian and Bicycle Committee. “We participated in the [aforementioned] complete street study and evaluated the results. We ask the Town Board to take positive action on this and the prospect of actually getting funding for this is really exciting.”

Delaware Avenue is found to have a higher crash rate than statewide average crash rates and contains numerous unsignalized pedestrian crossings. The data also found that most of the crashes are of right-angle and rear-end crashes, types of which can be prevented more by a road diet. Such a road diet would also benefit the highly-congested road, where motorists can enter the center lane to turn left from, instead of slowing down in the original lane, which would have originally slowed traffic down.

However, Town Board member Jim Foster conversely commented on the Delaware Avenue Complete Streets Feasibility Study (which was released in December 2017), which looked at the area’s traffic operations, crashes and street elements. From it, he intriguingly noted how residents and businesses (in other communities beyond Bethlehem) who live right on the road diet liked the complete design less than those who lived elsewhere.

Foster is worried that the road diet may have a “potentially negative economic impact on our businesses in [the Delaware Avenue] corridor.”

He wanted the public to consider whether the spending the eventual funds for the road diet project would be the best use of said funds, saying that “nearly three-quarters of a million dollars in public funds” could perhaps be better used for things like better sidewalk conditions, building swimming pools, hiring more employees or better equipping the local police.

While he acknowledged how safe the overall area would be if Delaware Avenue would have a road diet, he said that local businesses on the road would suffer from the would-be lowered vehicular traffic.

“We owe our local businesses much more than this, said Foster. “I do not want to have a single business in the Town of Bethlehem fail because this board failed to adequately consider the economic impacts of this project.”

The Town Board subsequently heard comments from many concerned local residents who attended the Aug. 8 meeting, who generally expressed how important the Road Diet Project would be in ensuring better safety and higher confidence in traveling around Delaware Avenue.

Paul Tick, a fellow Delmar resident, said that in the past 28 years, he’s seen multiple vehicular crashes. He noted that he himself was hit by a car and sent to the hospital once.

“I hope no one has to go through that experience and I hope we can mitigate the chances of that happening by supporting this road diet,” he said. “I also travel through Albany where there’s a similar road change that’s been made. And I have to say that travel on that road is much easier now than before, and safer, and I still get to my destinations on time.”

Patty Beeler, another local resident, also encouraged the Board to note how Madison Avenue in Albany helped ease traffic flow and benefitted pedestrians alike. Having driven on Delaware Avenue “hundreds of times … reducing the speed limit alone is commendable. Reducing the lanes and modifying the roads [are] good for the community and all the users. It will enhance our community experience.”

Leona Kassoff, a mother and Delmar resident of 23 years, who has witnessed many accidents on Delaware Avenue, encouraged the Board to continue supporting the Road Diet Project.

“I’ve logged many miles on that stretch of road. First, with babies in the backseat, then with 15 year olds next to me and learning to drive, and then 16 and 17 year olds that I send off on their own,” she said. “I was involved in a fender-bender, only made scary because my little girl was in the backseat.”

“I’m also now a proud owner of a giant puppy so I find myself as a pedestrian more and that road is kind of scary as cars can be aggressive,” she added.

Despite Foster’s concerns, the Town Board finally agreed and voted to approve the application to get funding for the Delaware Avenue Complete Streets and Road Diet Project. For more information, visit http://www.delawareavecompletestreets.com/.

Sydney Worthley to perform at Hope Rocks Festival to help those suffering with addiction, depression, suicide this weekend