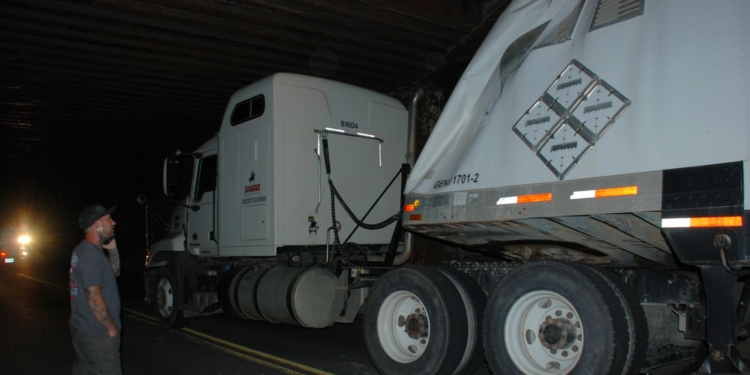 SLINGERLANDS—On Monday, June 25, at around 9 p.m., Bethlehem Police responded to a report of a tractor trailer that had struck the bridge on New Scotland near Mullens Road.

The vehicle involved was a 2016  Mack Tractor pulling a 53’ trailer. The operator, Akeem O. Olawunmi, 47, of Houston, Tex., stated that he did not see the clearance signs for the bridge and became stuck under the bridge after striking it.

He was issued a traffic citation for Operating a Vehicle over height of Clearance and is due in Bethlehem Court on July 11.

There was no damage to the bridge and the tractor and trailer were removed by Robert’s Towing. The road was closed for about two hours.

According to BPD Commander Adam Hornick, there are periodic closings of the rail trail on the bridge this week as Albany County is paving west towards Voorheesville. “The rail trail closings are a result of the paving,” he said, “not this crash.”