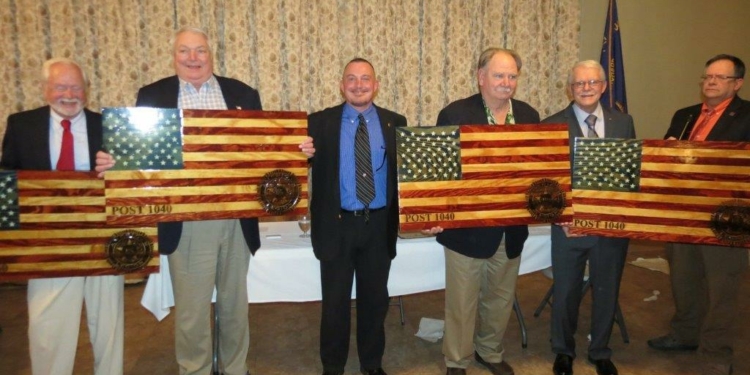 Larry Justice, Phil Giacone, Gerry Decker and Cliff Thompson are honored with the recognition of being Paid Up for Life members at The Nathaniel Adams Blanchard Legion Post #1040 on Sunday, April 29. Photo by Thomas Heffernan, Sr. / Special to Spotlight News

Each organization works to serve and commemorate those who have gone to war for the sake of this country, by lobbying for certain legislation. The Legion played the leading role in drafting and passing of the Servicemen’s Readjustment Act of 1944, otherwise known as, the “GI Bill.” It’s also responsible for organizing commemorative events, providing assistance at veterans hospitals and clinics, outreach programs and more.

Since its inception in 1930, American Legion Post #1040 has had 75 commanders, including current commander, Lyle Maddock. The oldest living former commander is Richard Lenseth, who served from 1958-1959.

There have been 53 Legion Auxiliary presidents since 1931, including current president, Roseann Lohery. The oldest living past president is Marcia Rosenfield, who served from 1968-1971.

The Sons of the American Legion Squadron #1040 began in 2002 and has seen nine commanders, including current commander Mark Burke. All but two of them are still alive today.

Chairman of the Board Scott Anson won the Legionnaire of the Year award and
Jeremy Martelle, who served as commander from 2014-2015 and is currently first vice commander, received the post’s Diamond Pin award.

“A Diamond pin is the highest award given out by the American Legion,” said current Commander Lyle Maddock, who hosted the evening’s events and was a recipient of the Diamond pin award last year.

“As in the past,” he said at the dinner, “we give out awards and certificates to honor those individuals that go above and beyond by volunteering. Volunteers are the heart of this organization and are the heroes who keep it going and make it successful.

Maddock made a plea for anyone present who had not considered volunteering or becoming an officer to do so, telling them to “go home tonight and think about the opportunities that are available to help others.

“I have learned that being the commander, or any leader in life, you must make some hard decisions and choices to uphold the position you are serving,” he said. “I hope to serve honorably.”