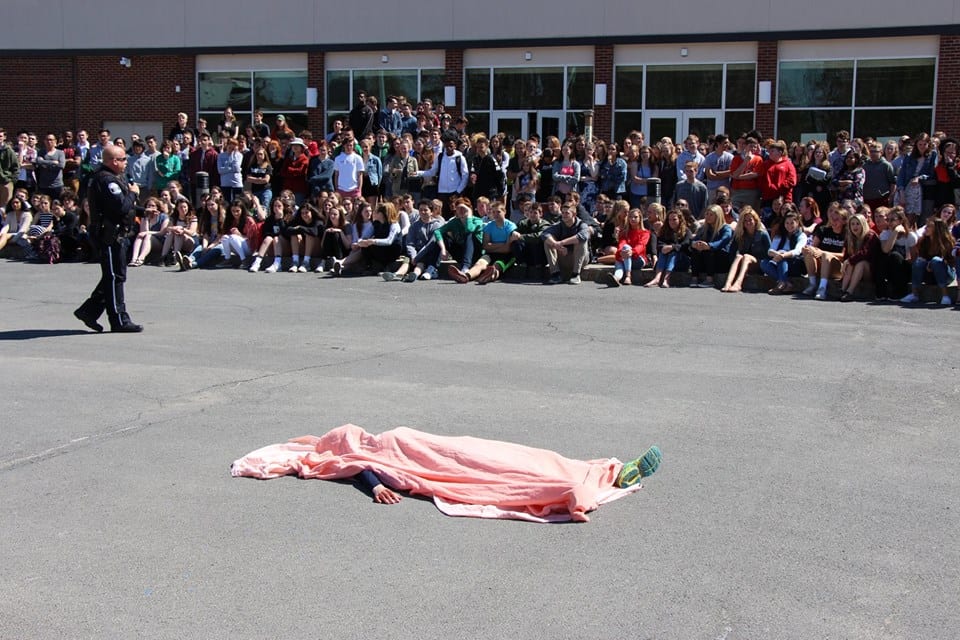 BETHLEHEM—Members of the Bethlehem Central High chapter of Students Against Destructive Decisions joined forces with the Bethlehem Police Department and other community first responders to stage a “mock crash” at the high school on Tuesday, April 24. The demonstration was attended by students in grades 9-12 and was intended to be a reminder of the importance of safe and sober driving. The event took place outside of the high school cafeteria.

According to BPD Commander Adam Hornick, the department has collaborated with students to conduct mock crashes at least a dozen times. “It is typically done every other year,” he said, “That way, we reach all juniors and seniors at once. We purposely do it just prior to prom and graduation season.”

“The mock crash on Tuesday left many students in shock. This event shows how impactful drunk and distracted driving can be on our community,” said McKenzie Albrecht, co-president of SADD. “Giving students a real visual of a car crash allows them to be reminded of the dangers of operating a vehicle under the influence of drugs or alcohol.”

“As a police agency, we feel that this part of the educational aspects of the effects of drunk driving is very important,” said Hornick.

Several students served as actors who were made up to look like accident victims for the event. The “victims” were treated at the scene by medical personnel, and ambulances, police, fire department personnel, as well as a coroner, were on hand to “treat” victims who had sustained varying degrees of injuries as part of the simulated crash. There was also a staged arrest of a “drunk driver” by police.

“To have the students actually see a real life scenario, and see the outcome, is a lot more realistic and provides them with the images to relate to the potential effects of drunk or drugged driving,” said Hornick. “This year our agency worked with Albany County STOP DWI to have the Amy Stock memorial trailer present. This is a death that happened in Albany County recently and her family worked with STOP DWI to further the educational aspect of the STOP DWI mission. This trailer has Amy’s car, is complete with audio and visual effects to show what took place and really helps to reinforce the point. It is a great resource when we carry the STOP DWI message.

“Our officers take pride in working with the students during this event to share the educational aspects of STOP DWI. By teaching the potential consequences, it shows them the strict reality of what can happen,” he continued. “ It is important for people to know if they drink there are lots of choices to get home safely, and driving isn’t one of them.”

“Our mock crash is important because the consequences of drinking and driving are irreversible. Not only do you put yourself at risk, but you are endangering everyone else on the road,” said Isabella Grimaldi, SADD’s other co-president. “With Junior Prom this weekend and many other fun events coming up this spring, we wanted to emphasize that this could happen to anyone.”

“We must impress on the students that their whole life can be permanently altered by driving under the influence just once,” said DBEMS Chief Steve Kroll, who provided two ambulances for the event. “No emergency responder ever wants to arrive at an accident and find a person who is mortally wounded because somebody drove under the influence. Those young people need to believe that actions can have dire consequences and they should not risk it even once.”

Construction of Northway Exit 4 ramp could start next year