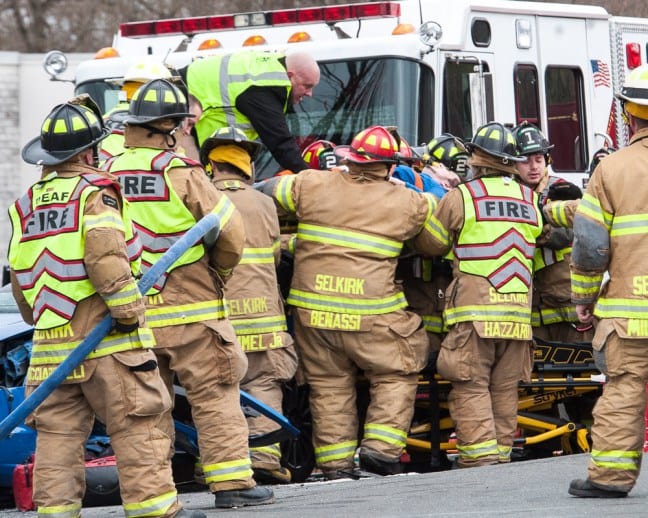 BETHLEHEM – One of the drivers involved in a crash at the intersection of Glenmont and River roads that sent four people to the hospital – including an infant and a toddler – was charged with DWAI by drugs, according to police.

On Tuesday, April 17, at around 3:18 p.m. Russell Schwimmer, a 26-year-old from Glenmont, was headed down Glenmont Road and failed to yield the right-of-way to a Volkswagen Jetta driven by Sarah Dujack, a 27-year-old from Selkirk travelling south on River Road.

Dujack and her two passengers, a 4-year-old and a 5-month-old, were taken to Albany Medical Center Hospital for minor injuries.

Schwimmer was extricated from his blue Ford Focus by Selkirk firefighters and transported to Albany Med with serious injuries.

Based on the investigation, according to Bethlehem Commander Adam Hornick, Schwimmer was charged with DWAI by drugs, failure to yield the right of way at an intersection and unlawful possession of marijuana.

Bethlehem Police were assisted at the scene by the Selkirk Fire Department, Delmar-Bethlehem EMS and Albany County Paramedics. The crash remains under investigation and police are requesting anyone who witnessed the crash contact them at 518-439-9973.