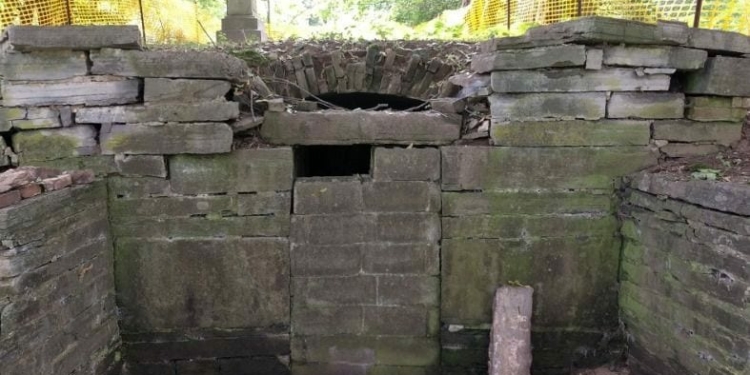 SLINGERLANDS — The first steps toward restoring the historic Slingerland vault got underway earlier this month, when the town highway department cleared trees and staked out a path to the property next to the former Mangia restaurant.

Now, a committee dedicated to completing the project, which is expected to require several months and around $100,000, is asking the community for help raising the funds to make that happen.

Town Historian Susan Leath said that she has been aware of the need to restore the vault, which holds four generations of the prominent Slingerland family, for years but that “the stars began to align” only last summer.

“I knew we had a new supervisor and a new highway superintendent coming in. There was a new owner for the adjoining property,” she said. “And I knew I couldn’t do this alone.”

Leath approached Sue Virgilio, a Slingerland descendent, and Kathleen Bragle, who lives in the old Slingerland home across the street from the vault, and a few other residents she knew would be interested in the project and the Friends of the Slingerland Family Burial Vault began meeting in the fall. “We knew that, with the new administration coming in in January, we wanted to hit the ground running.”

The family that occupies the vault, which has been deteriorating for decades, has a long and influential history in the region. The first Slingerlands on record owned land in Beverwijck as early as 1663 (the name was then spelled Slingerlandt). During the Revolutionary War, part of the family remained loyal to the crown and moved to Canada after the territories became independent. (That side of the family founded the Slingerland Drum Company in 1913, initially producing marching drums, but quickly becoming a favorite with jazz musicians.)

John I. Slingerland, a former congressman who worked to ensure that the Susquehanna line of the D&H Railroad would run through Slingerlands, was a dedicated abolitionist in the years before the Civil War. So was his brother William Henry, Slingerland’s first postmaster and a civil engineer who created a water system that served four towns in Albany County. Both brothers are buried in the vault, along with their father, John A. Slingerland.

The burial of the father alongside his sons may have been the cause of a rift in the family around that time, according to Bragle and Virgilio. He died before the vault was built in 1852 and the question of whether he should be moved from his original resting place (in what is now Bragle’s backyard) was put to the family for a vote, according to documents that were discovered several years ago. Two family members opposed the move, said Virgilio, who was uncertain of the exact reasons for the disagreement.

Ultimately, the father was buried with his sons, but the family apparently never recovered from the disagreement.

A former town historian, Ed Mulligan, came across the documents at Bragle’s home years ago (while the old Slingerland home is the oldest in the area, the Bragles are only the third family to own the property since it was occupied by its original family, and subsequent owners have taken care to preserve historical items that were left behind).

“He called us up at 7:30 in the morning,” Bragle said laughing. “He was just so excited that he finally figured out why the family had split like that.”

“It’s really a fascinating family,” said Leath, pointing out that Virgilio only recently found out that she was related to the historic Slingerland family when she took a DNA test her mother bought her.

“There were always rumors that there was a famous congressman in the family,” she said. “But it was never clear how he was related.” Since discovering she is a Slingerland, Virgilio has made contact with a number of newly-found relatives and enjoys untangling the stories of how they’re related.

“Bethlehem has a rich history, and the Slingerlands family was a central part of it,” said Town Supervisor David VanLuven. “Learning about their lives and work from the mid-1800s to the present can help us not only understand key moments in history, such as slavery and the Civil War, but also where we are today and how we can make history too.”

Bragle mentioned legislation written by John I. Slingerland during his time in Congress, a Homestead Act bill that never passed. According to Mulligan, historian Henry Christman, author of Tin Horns and Calico, has said that if Homestead Act legislation authored by Slingerland had passed Congress, it may have prevented the Civil War. Regardless, when he died just before the war began, Slingerland willed some of his land to a former slave.

The history of those buried in the vault, and its significance to local history, is reason enough to restore the site, say advocates. But, added Bragle, it’s also a matter of safety. Near to the Albany County Helderberg-Hudson Rail Trail as well as Slingerlands Elementary School, the integrity of the site is important for safety reasons.

“Teachers used to take their classes down there for a little lesson on local history,” she said, noting that one teacher has set aside $1,000 to provide a sign for the site. “It would be nice if they could do that without having to worry about the safety of the students.”

Now that trees have been cleared, the committee is working to raise money to pay for the project. They have set up a gofundme site at gofundme.com/SlingerlandVault and are accepting checks made out to The Slingerland Foundation, which can be sent to Susan Leath at Town Hall. Because the town owns the property, money raised will be conferred to the town, which will set the money aside in a dedicated fund and coordinate with the committee to contract the technical engineering, masonry, and related services necessary to stabilize and restore the vault.

“It’s great to have residents come forward to work with the town to advance a project,” said VanLuven. “Often, people just identify needs and then look to the town to do it alone, which we usually can’t because our resources and staff are already stretched thin. So it’s refreshing to have a group that is not only pushing us, but is also collaborating with us to make good things happen.

“The Town took responsibility for the vault decades ago,” he continued, “and it’s important that we meet our responsibilities. My guess is that past efforts to maintain then restore the vault failed because we didn’t have a motivated group of residents ready to push the project forward.  Now, we do, and I’m grateful to them and the Slingerlands family for working so hard to restore this historical gem.”

“I’d like to have people working on it by this summer,” said Leath. “I really don’t want to lose this momentum.”

“I’m relentless,” said Virgilio. “Even if it doesn’t happen this summer, it will happen.”