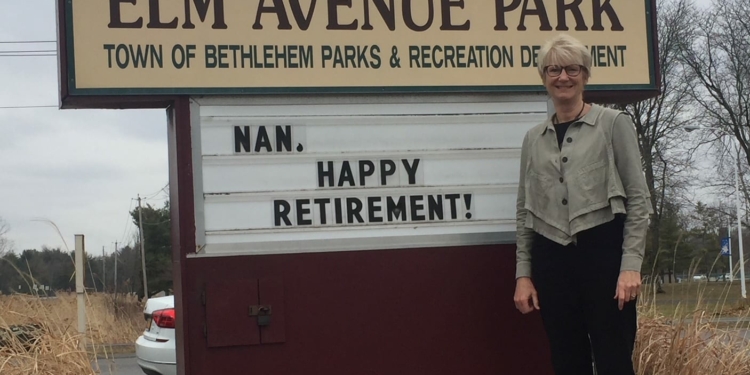 BETHLEHEM — After 30 years of service with the town’s Department of Parks and Recreation, more than half as its administrator, what recently retired Nan Lanahan says she will miss most are the people.

Whether her own staff, other town department heads or community members, Lanahan said that the most rewarding part of her job was the people with whom she worked to improve town parklands and provide recreational programming to Bethlehem residents.

“I had a great staff in my department and, at Town Hall, all the department heads pitch in and help each other,” she said. “I’ve gotten a lot of support for them over the years, from planning to computers. All of them have been great. We can’t all do it alone, we’re definitely not working in silos.”

“I learned a lot from Nan during her tenure,” said Acting Administrator Jason Gallo, describing Lanahan as “very thorough in her work and passionate about providing quality parks and recreation services.”

According to Bethlehem Supervisor David VanLuven, a national search is underway to find a permanent replacement for Lanahan, whom he said “laid a foundation for long term success, meaning that we’ll be able to continue enjoying our parks and programs for at least a generation.”

That “foundation” includes the Parks and Recreation Master Plan, released in late 2015, which provides a framework for what the department hopes to accomplish in coming years. It also includes the establishment of the Friends of Bethlehem Parks and Recreation, a nonprofit group dedicated to improving recreational programming at and access to the town’s parks, by raising funds, organizing volunteers and increasing awareness.

“Since Nan suggested that we start a Parks and Recreation friends group six years ago, I have worked with Nan on an ongoing basis,” said Joan Gavrilik, president of the Friends’ Board of Directors. “What never failed to impress me are the high standards and attention to detail that Nan applies to everything she does. This is reflected both in our beautiful Bethlehem town parks and our strong Parks and Recreation Department.”

Since she began working for the town in 1988, the number of parks has grown from six to eight, play areas have been improved, and new technologies have allowed residents to register for programs or reserve park space with greater ease. In her early days, department activities revolved primarily around the town pool complex at Elm Avenue Park, which was built in 1973. Programming, said Lanahan, has grown dramatically since then.

This summer, the department is offering: a variety of adult fitness and athletics programs, such as yoga, tennis and softball; kayak and canoe eco- and history tours and rentals; gardening for kids; sports; swimming; Shakespeare; and more. There will be weekly children’s entertainment, biking events, and a senior health and fitness day.

One of the goals of the department is to stay aware of current fitness and recreation trends, and Lanahan has worked to offer an up-to-date variety of athletic, aquatic, cultural and leisure activities to town residents.

Finding space for activities can sometimes be a challenge, she said, explaining that, while a community center has been on her “bucket list” for most of her career, the idea simply hasn’t gotten any traction since residents voted down a proposal to build one more than 20 years ago. While Lanahan said she doesn’t anticipate that changing any time soon, she explained that the department manages with the help of the school district, Town Hall and the Bethlehem YMCA.

Of all the things she did at the parks department, Lanahan said her favorite moments were when the community came together to accomplish a goal. She spoke with pride of the new playground at Elm Avenue Park, which was funded with grant money procured by Assemblymember Pat Fahy and built by more than 100 volunteers last summer.

“People were really excited about it. We had an old one that was in bad shape and falling apart,” she said. “That was a huge undertaking. The Elm Ave Park playground is, in my opinion, the best in the Capital District.”

“Nan built the best parks and recreation system in the Capital Region,” said VanLuven, “and I’d run it against any other municipality in the state.”

Having served under eight town supervisors, Lanahan declined to pick a favorite. However, noting VanLuven’s support for the new community gardens at Elm Avenue Park, she said she’s confident “he’s going to be a great supervisor.”

Lanahan, who spent her first day in retirement with her grandchildren, said she’s looking forward to playing golf more often and spending more time with her family. She also said she has left the department in good shape and in good hands.

“Nan has been an amazing co-worker,” said Bethlehem Director of Economic Planning and Development Rob Leslie. “It has been a joy to work with someone so passionate, calm and professional all at the same time.” Noting their work together on the Parks Master Plan, as well as the Local Waterfront Revitalization Plan update, he added, “Nan was always engaged and had a focus on the details. The recreation opportunities Bethlehem has today are a result of her years of leadership and dedication to the Town. I wish Nan an amazing retirement with years of enjoyment to come.”

LETTER to the EDITOR: You failed to mention

BETHLEHEM LIBRARY: A celebration of the American musical