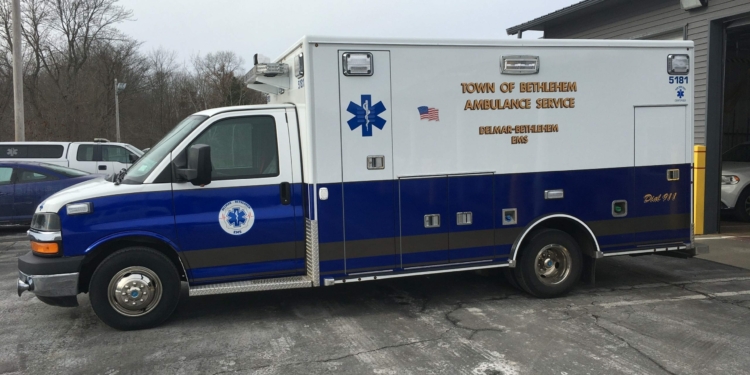 After five years, DBEMS recently decided it was time to unify its fleet of ambulances. “We had ambulances in three different colors, said DBEMS Chief Steve Kroll. “We decided to rebrand in a color that was all our own. Not the red of Delmar or the gold of Bethlehem. We are Delmar-Bethlehem. One agency to serve the whole town. And we picked blue.” Photo by Steve Kroll

BETHLEHEM — Delmar-Bethlehem EMS is celebrating the fifth anniversary of the merger that brought together the EMS companies serving the southern and northern portions of town. While the merger wasn’t legally official until one year later, it was on Jan. 1, 2013, that Bethlehem EMS and Delmar EMS combined forces and began working together to dramatically improve emergency medical services town-wide.

“Over time the number of EMS calls in the community had begun to increase,” explained DBEMS Chief Steve Kroll. “That’s common in communities all over, both with the growing of the population and with the aging of the population, and both agencies were struggling to be successful in an environment where there are fewer and fewer people who are interested in volunteering.” Kroll credited visionary leadership and a willingness to embrace change with the unusual success of the DBEMS model, which is now more financially secure and boasts a higher number of volunteers than most upstate New York volunteer-based EMS squads, many of which are currently in crisis.

“Like all things in health care, EMS is becoming more of a business,” Kroll said. “We were essentially duplicating many things between the two agencies and so the decision was made in 2012 that, if we brought the two agencies together, we could achieve the economies of scale and bring together two middle-sized groups of volunteers to one large group of volunteers—and that has been very successful for us.”

As with any merger, there were bumps in the road. Proprietary instincts regarding traditions and history had to be overcome as the two squads worked together to combine two longstanding organizations—both with different histories, traditions and strengths.

“There was a series of negotiations and both squads got together and talked about what it meant and at the end of the day, everyone decided to move forward,” said Kroll. “I think we’re all extremely pleased with the result, we found that we’ve been able to respect the history of both organizations and form a new organization.”

“I’ve been in fires with all of these guys,” said DBEMS volunteer Drew Anderson, referring to first responders from both EMS squads as well as local police and firefighters, many of whom also serve as DBEMS volunteers. “Everybody really respects everybody. I trust all those guys.”

Anderson said that, while there are friendly rivalries, the overall feeling is generally one of camaraderie.

The DBEMS model, which employs both volunteer and paid staff, has allowed the force to save the Town of Bethlehem, which subsidizes its activities, millions of dollars over the last five years

“As the number of volunteers shrinks and communities all over New York state increasingly turn to fully-paid and expensive EMS services, we are incredibly proud of what we are doing in our town”, said Board Member Linda Schacht of Selkirk. “If our [nearly] 70 volunteers weren’t here, taxpayers would have to shoulder millions of dollars of extra expense to maintain ambulance service.”

According to Kroll, volunteers put in more than 15,000 scheduled hours each year, saving the agency approximately $900,000 annually when payroll and benefits are taken into account. Since 2012, DBEMS has managed to improve

“We have one quality standard for everyone that works here, whether you’re paid or a volunteer – they receive the same training, they have the same standards,” he said. “They crews work really well side-by-side. You may have one paid person and one volunteer. It allows us to be really effective and efficient for the community.”

Prior to the merger, Delmar EMS had a larger and younger volunteer membership but found it could use the physical assets that Bethlehem was able to contribute. Delmar, which began as part of the Delmar Fire District, separated from the fire company in 2010 to incorporate as a nonprofit and would soon be looking for new accommodations as Delmar Fire expanded and needed the space occupied by the EMS apparatus and personnel.

The merger allowed the companies to consolidate equipment and lodging, as well as bring down group bargaining costs. DBEMS sold an ambulance that cost thousands annually to insure and maintain, was able to downsize other necessary but occasionally used equipment that became redundant after the merger, and offloaded two properties. The company was also able to save on group insurance and bulk purchasing.

Currently, DBEMS operates out of two locations: the south station on Route 9W in Selkirk near A.W. Becker Elementary School, which is owned by the company, and the north station in Delmar, which is renting space for its ambulances in Delmar Fire Station on Delaware Avenue and a residential property for personnel behind the fire station. (Following a $4 million renovation of a town-owned property on Adams Street this year, DBEMS will relocate its north station to that building, which will be designed for its specific purposes. More about the history of the companies and the move to Adams Street in upcoming issues.)

“We’ve been invited to come and talk about this model all over the state, to talk to other communities that are kind of struggling with what they’re going to do,” Kroll said. While the model won’t work for all agencies, such as the recently defunct Voorheesville Area Ambulance Service, which has been absorbed by DBEMS and the Sheriff’s Office, it may serve to improve service elsewhere in the state and, said Kroll, and help to recruit more, and younger, volunteers. Something similar has been proposed for local fire districts, five of which serve Bethlehem, but leadership has proved resistant and voters have supported them.

“It’s not a commitment made lightly,” said the EMS Chief of his volunteers. “If we don’t show up, no one shows up.” But, he continued, offering the level of training DBEMS is able to offer, as well as the experience to be gained by the number of calls (approximately 13 a day) and an already robust volunteer group, makes it easier to attract more volunteers.

“We get people from all over,” he said, characterizing the current volunteer force as “young and vibrant,” notably uncommon in volunteer EMS organizations around the state. “Younger volunteers that are pre-med and want the experience, nurses, physical therapists. We had one kid who just graduated medical school and became a medical director here.”

Since the merger, said Kroll, “We get there faster, no question. And we’ve been able to upgrade our equipment dramatically. We’ve managed to achieve the economies of scale and become successful where other companies can’t be, which has allowed us to purchase some top-of-the line technology.”

“We’re very good about spending money,” said DBEMS Medical Director Bruce Ushkow, who also sits on the Board of Directors. “There are a lot of ‘toys’ that I’d like to have, but we only buy the ‘toys’ we need.

“This is a fabulous outcome,” Ushkow said of the merger, highlighting the two-tiered EMT/paramedic response protocol currently employed by DBEMS (which will be covered in next week’s issue).

“It’s pretty well known that this agency just works,” said Brian Wood, EMS captain in the Albany County Sheriff’s Office. “They’re maintaining where other places are collapsing in a hurry. I don’t know if you can find better care.”

Market indicators point to the demise of the longstanding compact disc