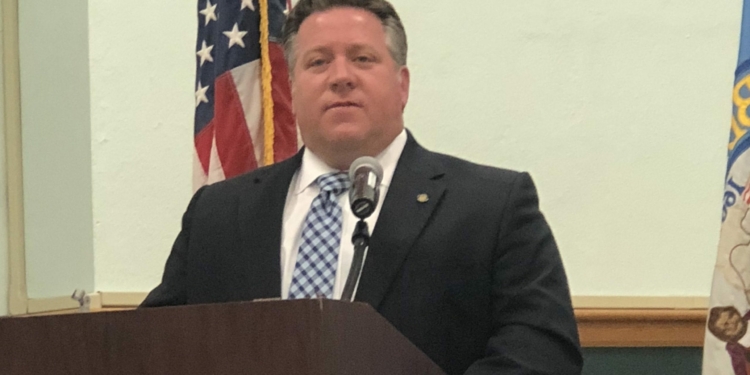 BETHLEHEM—When Dan McCoy became Albany County Executive seven years ago, he decided to “take the show on the road,” he said, to reach out to residents in the county’s many municipalities to share with them how their tax dollars are spent at the county level.

“There are a lot of things that we do that people don’t realize how they intertwine with your daily lives,” McCoy said on Wednesday, March 14, as he gave his seventh state of the county update at Bethlehem Town Hall.

Saying that state mandates and the state tax cap can make county governance difficult, he noted the work his office has done to improve the financial health of the county—negotiating union contracts, increasing fiscal reserves and keeping taxes down.

Moving forward, McCoy talked about some things his office is working on, such as the addition of rental bikes on the Albany County Helderberg-Hudson Rail Trail in partnership with the Capital District Transportation Authority. “We estimated last year that 250,000 people walked the rail trail,” he said. He also answered a question he said he often gets asked when visiting this part of the county: “The final stretch of the rail trail? We’re looking at August.

“We’re going to be revamping the bridge on New Scotland right out by the Slingerlands Fire house,” he said, adding that the county has purchased a house on the rail trail in that area and is considering whether to turn the property into a visitor center. He also said that the county is looking at options for those who need to use the restroom while walking or biking on the trail, whether that will involve partnering with businesses along the trail or the addition of “porta-johns.” He noted that the county already has an agreement with Stewart’s on Delaware Avenue that allows trail users to park in its lot.

McCoy spoke about the Albany County Nursing Home, which has experienced a financial turnaround since he took office seven years ago. ACNH is about to undergo a $60 million renovation that will include the addition of the county sheriff’s 9-1-1 division on the top floor. “So response time for our residents at our nursing home is going to be less than ten seconds,” he said. “It’s going to be a good incorporation. First of its kind in New York state.”

The county executive went on to talk about sharing services across municipalities, something his office has focused on for years but has recently been mandated by New York state as a cost-saving measure. Working with the Rockefeller Institute, the county developed a plan that McCoy said would save approximately $19 million dollars when fully implemented. “Right now we’re looking at the Voorheesville school district, maybe taking over their bus maintenance and some other stuff for them. It’s going to save the [Village] of Voorheesville a lot of money.”

Another focus of the county, he said, is energy efficiency. “We’re trying to be the greenest county in New York state,” said McCoy, pointing out that the majority of county buildings are  designated as Energy Star efficient and that officials are actively looking for ways to increase efficiency through solar energy and other renewables, in addition to hosting a variety of informative public programs.

“Some of the un-sexy things we have to do: we have this opiate crisis going on in this nation,” McCoy said. “I say this to the young people in the audience: 80 percent of heroin users come from prescription drugs.” He spoke briefly about a federal lawsuit that the county has filed against four national pharmaceutical manufacturers, claiming that the companies have engaged in deceptive practices that have resulted in widespread addiction and death.

McCoy pointed out that Four Corners Pharmacy in Delmar is one of four pharmacies that participates in the county’s Project Orange program (named for the orange labels on controlled substance prescription bottles), providing packaging and free shipping for those who want to safely dispose of any unused medications.

“Go home and clean out your medicine cabinets,” he advised. “Get rid of that stuff. You don’t need it laying around.”

Before taking his leave to get to another engagement, McCoy touched on a few other topics, such as youth programming at Lawson Lake and his equity agenda, through which his office tries to ensure that county services are accessible by all residents, regardless of age, income, ethnicity or address. He thanked board members and County Legislator Bill Reinhardt, who was in attendance, and offered to answer any questions but none were asked.

McCoy’s next town “meet and greet” will take place tomorrow, Thursday, March 22, during the Coeymans Town Board meeting at 18 Russell Ave. in Ravena.

PICK of the WEEK: Tribute to The Beatles at GE Theatre