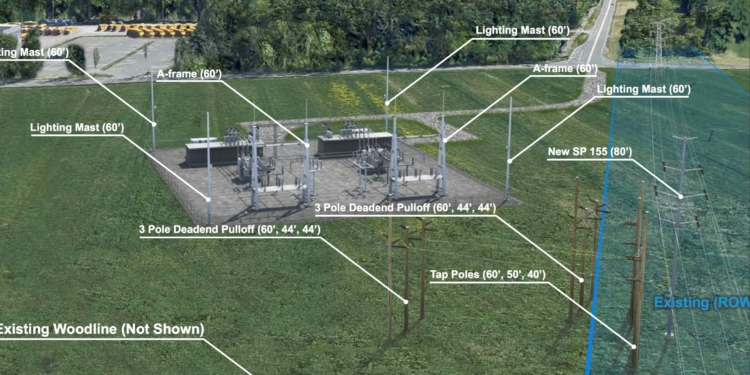 BETHLEHEM — In 2014, National Grid proposed construction of an electrical substation on its property at 109 Van Dyke Road near the Delmar Bypass Extension. The substation would take electricity from the existing 115-kilovolt power lines for distribution through the Delmar area, as well as out to Vista Technology Park in Slingerlands.

Because the town zoning for that area does not permit a substation, National Grid applied for a variance from the town’s Zoning Board of Appeals (ZBA). A little more than two years later, the application was set to go back before the ZBA this month, until National Grid asked to reschedule the dates to reopen review, present the project and gather public feedback. The project is now tentatively expected to go back before the ZBA in April.

Under state law, the standards for public utilities like National Grid are different from those for other projects because they are presumed to be operating in the public interest. For this substation, National Grid must demonstrate to the ZBA that:

The ZBA opened a public hearing on the proposed substation on Nov. 5, 2014 and continued it at their March 4, 2015 meeting. Board members and residents raised a number of concerns at the time, noting the proximity of the location to Eagle Elementary and Bethlehem High schools, worrying about the visual impact of the proposed substation and questioning the viability of other potential sites. One resident wondered about the impact on local farm animals and wanted to know if extra grounding would be required, due to the fact that “cows are very sensitive to electrical [currents], and they cause stray voltage.”

Bethlehem Central School District’s Chief Financial Officer Judith Kehoe spoke to the ZBA in March 2015, saying that parents were concerned about the project, asking about cumulative effects from nearby electricity hubs and wondering what effect the 18-month construction period will have on district transportation.

“The central bus garage is right there,” acknowledged Dan Coffey, who was ZBA chair at the time. “So, literally, It’s gotta be done July-August, or it’s going to be pandemonium.”

A representative from National Grid stated that the company would try to get work that would significantly disrupt traffic done during summer months. If that portion of the project takes longer than 3-4 months, he said, National Grid would take steps, such as staggering the work, to mitigate negative impacts.

Put before the Albany County Board of Elections in November 2014, the matter was deferred back to the town.

After listening to considerable public input at an unusually well attended meeting, the ZBA voted on March 4, 2015 to keep the public hearing open and to hired a consultant to:

Last month, the consultant POWER Engineers completed their initial assessment of the proposal and the ZBA is now continuing its review of the project.

According to the report, “it is apparent that the existing local substations (Juniper and Delmar Substations) are inadequate to support the population, business and economic growth that are projected for the Bethlehem-Delmar area. It is POWER’s opinion that the Bethlehem-Delmar areas electrical distribution sources and systems are in need of upgrades due to the source voltage and capacity limits of the existing substations.”

The proposed substation would serve areas currently served by the Delmar Substation, which is located off Adams Street adjacent to the Albany County Rail Trail, according to the report, “and allow for its retirement and removal.”

The review process will continue the public hearing, which allows the ZBA to receive insights from residents in addition to information from National Grid and POWER Engineers.

Residents are welcome to attend and speak at ZBA meetings, or can watch them live or on-demand through the town’s meeting portal. Written comments can also be emailed to Kathleen Reid, ZBA Secretary, at [email protected]