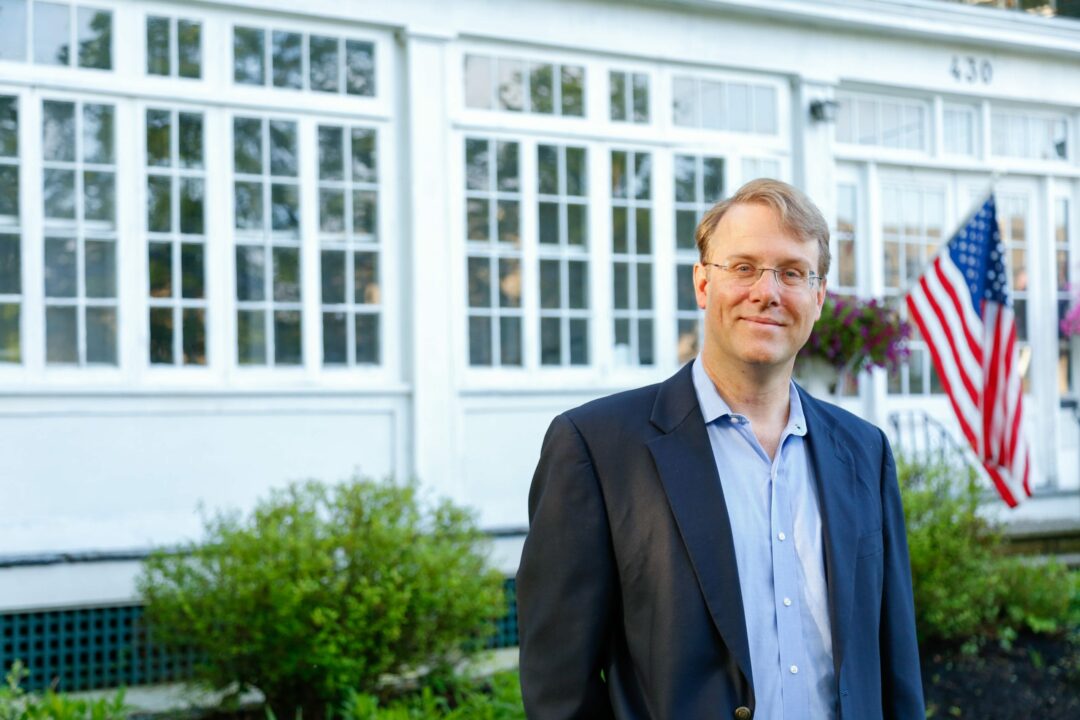 BETHLEHEM  — Town supervisor candidate David VanLuven grew up in the Rocky Mountains, where he witnessed his hometown of Park City, Utah, suffer through the shutdown of the area’s mining industry and then undergo a renaissance as a tourist destination. While the area is now thriving, and was even a major location for ski and snowboarding events during the 2002 Winter Olympics, VanLuven said that he witnessed firsthand the negative effects of uncontrolled development and growth.

“It was completely out of control,” he recalled. He said that he watched developers cut large swaths into formerly pristine mountainsides before abandoning them for other projects. A competitive cross-country skier and avid outdoorsman, he felt compelled to go into a career in environmentalism, he said, to help protect the spaces he loved.

“Outside is so cool,” he said with enthusiasm. “There are just so many amazing things out there.”

At Middlebury College, a private liberal arts school in Vermont where he also majored in religion, VanLuven was allowed to design a major. His love of snow led him to design a major in Arctic and Alpine Ecology and he traveled north of the Arctic Circle to complete his thesis work.

“Camping outside when it’s 40 degrees below is the best,” he said with a note of humorous sarcasm. “It really helps you to appreciate the simpler things, like dry socks.”

After Middlebury, VanLuven earned a joint master’s degree in Urban/Environmental Policy and biology from Tufts University, he spent more than a decade with The Nature Conservancy in New York and New Hampshire. In addition to serving on numerous conservation committees and board, he has lobbied on behalf of environmental issues in both Albany and Washington, D.C. He now owns an environmental consulting business that helps nonprofits and government agencies with strategic planning, policy development and fundraising.

Now living in Bethlehem with his wife and three daughters, VanLuven said that he was initially inspired to run for Town Board two years ago because he was concerned about the pace of development in Bethlehem. He won that seat and is now the Democratic Party’s choice to replace Supervisor John Clarkson, who has chosen not to run for re-election in November.

“Residential growth is a huge challenge for our town,” VanLuven said. “I’ve been very frustrated over the years; I don’t like the trajectory. People have a right to develop their property, but I think that communities also have a right not to have development on one property degrade the quality of life for everyone else. So, I strongly believe in zoning. I think it’s appropriate not to allow a hazardous waste dump to be built across from the high school. That’s what zoning is for.”

VanLuven noted that he has consistently opposed, often alone, zoning variances put before the Town Board that would allow for larger development projects in areas zoned for less dense residential development.

One thing he said he would like to do is conduct a full review of town codes, in

the context of the town’s comprehensive plan, to be sure that the town has the tools it needs to assist in preserving aspects of the community’s character that its residents are concerned about preserving.

During his time on the Town Board, VanLuven said that one thing he has come to appreciate is the work done by town employees. “The Highway Department is stretched to the max,” he said. “But, if you hit a pothole, it’s 100-to-one that you’re on a state or county road. Our roads are fantastic and the sidewalks are in great shape.” While he hears the occasional complaint about snow or leaf removal, he said that most people don’t understand that 40 percent of the town’s entire workforce is out plowing roads for eight hours a day following significant snow storms.

Going forward, VanLuven said it will be necessary for residents to decide which they would prefer: lower taxes or lesser services. Currently, the town is operating with a reduced workforce, even as it is continues to add new developments, streets, and infrastructure that need to be maintained.

“I think Gary Fish is saying that he’ll expand services and lower taxes,” he said of his opponent. “That’s either untrue or a fundamental misunderstanding of how a town budget works.”

Infrastructure, he added, is something that will need to be addressed in coming years — an expenditure that, while necessary, is not politically attractive. “There’s no reward for fixing a problem that no one knows exists,” he said. “So, even though it’s much more expensive and annoying to fix it once it’s broken, it’s better politically. But that’s just no way to lead.”

VanLuven spoke well of Dan Coffey and Maureen Cunningham, the two Democrat-endorsed candidates for Town Board. (Coffey, however, will only be appearing on the WFP ballot line.) The trio has gone door-to-door together for the last few months, speaking with residents and listening to their concerns, and VanLuven commended Coffey and Cunningham for having “solutions-oriented” attitudes and skills.

“It’s really easy to complain,” he said. “And it can be hard to identify solutions and implement them. It seems to me that some other candidates in this election are only complaining, which can be a good political strategy but won’t improve our town in any way.”

“I didn’t get into the environmental field because I wanted to complain about all the damage we’re doing, although I do want to help,” he said. “I got into

“The world is an amazing place and we have to be thoughtful about how we live in it. My role has always been more trying to guide people in making good decisions rather than forcing them to do it. I see the same thing in local politics. A lot of the real challenges that we have in town, we’re not going to be able to tell people what to do, we can only guide.”