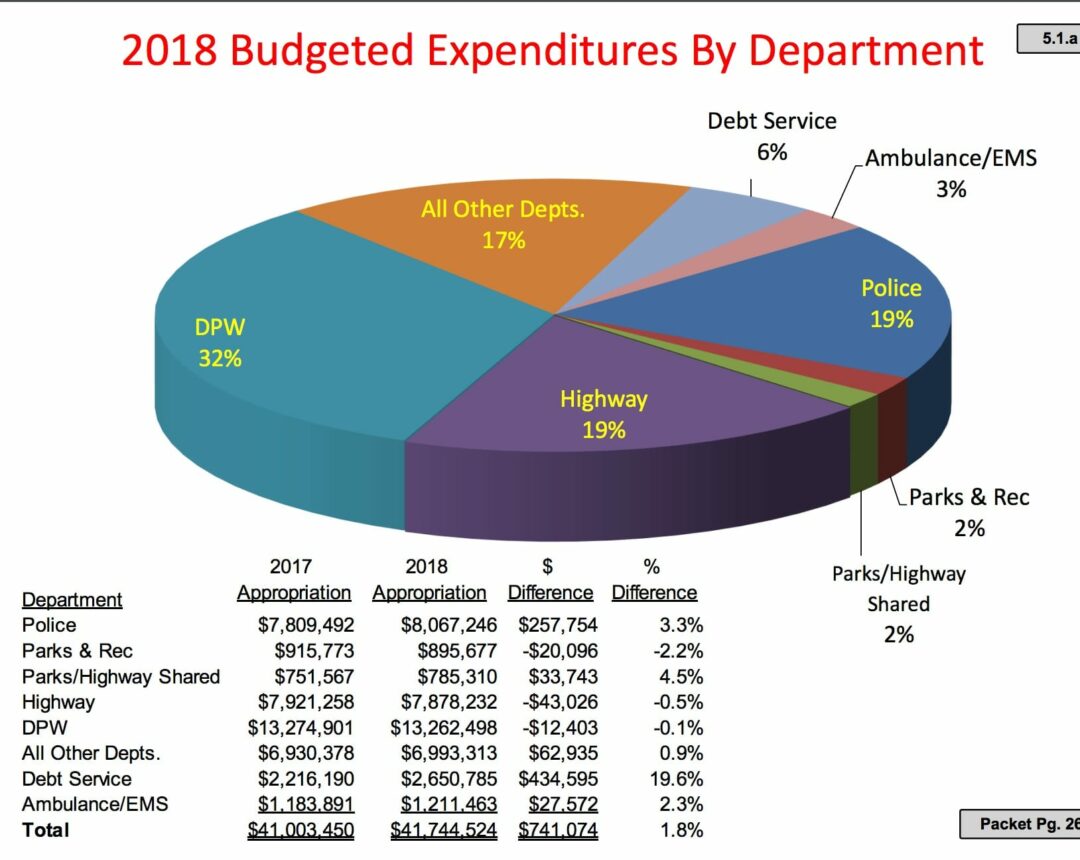 The proposed budget would increase spending by 1.8 percent, or $741,000, over 2017. About 59 percent of that growth, $435,000, will pay down debt on capital projects that are either underway, such as the Adams Street garage and Delaware Avenue Streetscape Project, or have already been completed, such as the purchase of new highway equipment and the sidewalk on Krumkill Road.

It would also include a 2 percent cost of living increase for all town employees, add two new full-time police officers and eliminate a mechanic position.

“We call it the tentative budget, not because we’re unsure or unsteady, but because it’s the first presentation,” said Clarkson, “oftentimes, it is amended thereafter.” He explained that Bethlehem is the only municipality in the region to employ a long-term financial plan that informs the yearly budget process.

The town’s five-year capital plan, which is updated annually, not only identifies both minor and major capital projects that are considered high priority, but also seeks to establish timelines and funding sources that will allow those projects to be completed expediently and affordably.  While the plan is not officially adopted by the town or in any way binding, Cohen said when presenting it to the Town Board on Sept. 13 that it “provides a vehicle for mapping out our needs and expectations.”

The $55.2 million capital expenditure plan expects to invest a total $44.3 million in water and sewer infrastructure, sidewalk projects and public safety improvements over the next five years, including: $14 million for the Clapper Road Water Treatment Plant; $4 million for the renovation of the Adams Street garage; and $2.25 million for

alterations to the Town Court and police station.

Generally, he noted, about a dozen or so projects comprise the bulk, currently more than 85 percent, of the spending plan. Other large projects envisioned for the coming five years include: construction of a roundabout at Feura Bush and Glenmont roads; street paving; sewer pump and water main replacement; improvements to water storage tanks and the New Salem Water Treatment Plant; and the replacement of highway equipment.

Approximately $6.75 million would be spent on capital improvements in the tentative 2018 budget — $2.28 million from budgeted operating costs and $4.47 million in debt service. The additional $12.9 million in capital spending planned for the year will be financed independent of the adopted budget. Almost $2.78 million will be paid through Capital Reserve and Parkland Set Aside funds, which fall outside the budget and require board approval on a project-by-project basis, according to Cohen. Slightly more than $1 million is expected in grant financing. And the remaining $9.02 million represents incurred debt that will be paid off in future operating budgets.

The five-year evolving plan also includes a component aimed at moving the town away from borrowing money to pay for recurring costs, a habit that began during harder fiscal times. While debt usage is by no means out of hand, say officials, the town feels that it is better fiscal management to cover those costs out of the town’s general operating fund.

“Every time we fund a project through debt service we provide ourselves less financial flexibility in the future,” said Cohen. “That being said, we don’t know what’s going to happen tomorrow, and the town has been good at adapting to challenges. Over the last several years, we’ve saved money by refinancing older debt, restructuring and/or combining departments, leasing out the golf course, modifying the justice court hours, taking attrition, building/contracting a solar farm, among other changes. We’ll continue to work on cost savings and initiatives with the expectation that we will be able to afford projects as they are deemed necessary and appropriate.”

The Town Board is scheduled to vote on the proposed budget on Wednesday, Nov. 8. A formal public hearing will take place before that, on Wednesday, Oct. 25, 6 p.m., at Town Hall., 445 Delaware Ave.

Cohen said early this week that he hasn’t heard any negative responses from board members or the community and that he expects few changes will be made to the tentative budget before the November vote.