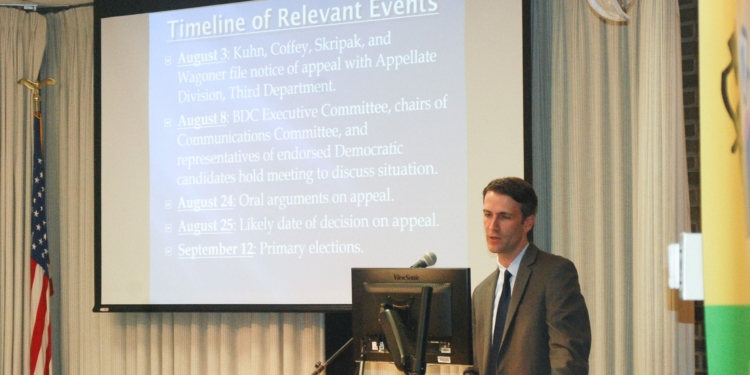 BDC Chairman Jeff Kuhn points out the timeline events that resulted in what was ultimately viewed as an improperly completed certificate that named its endorsed candidates. (Photo by Ali Hibbs / Spotlight News)

BETHLEHEM — The election season has gotten off to a rough start for the Bethlehem Democratic Committee. BDC leadership has come under fire by members of both political parties and the resulting discourse, much of it on social media, appears to be undermining what might have been a civil and democratic process.

After a state Appellate Court denied an appeal on Thursday, Aug. 24, a small handful of insurgent Democrats have succeeded in ejecting the committee’s endorsed candidates from the party’s ballot line in November — and avoiding a primary contest altogether. Citing case law, appellate justices upheld the state Supreme Court’s finding that an error on certificates substituting two candidates — Giles Wagoner for Brent Meredith in the race for Highway Superintendent and Dan Coffey for Giles Wagoner in the race for Town Board — rendered the certificates invalid and made Wagoner and Coffey ineligible to run on the Democratic line. The finding states that a lack of signatures on the affidavit portion of the certificate was tantamount to not submitting any affidavit, which is required by law.

An Opportunity to Ballot, which would have forced a primary in which voters could have written in the names of the deposed candidates, was also denied. “What the appellate court ruled is, because there in fact will be candidates on the Democratic line in November, Harder and Morin, Democrats are not ‘left without a candidate,’” Coffey said, “and therefore they declined to give me and Giles an OTB.”

An appeal for Coffey said he disagrees with the decision, “because, as you know, Harder and Morin are not supported by most of the BDC and we felt we should at least be afforded an opportunity to wage a write-in campaign.”

“We are disappointed in the decision,” said BDC Chairman Jeff Kuhn. “A technical irregularity with respect to the location of signatures on a piece of paper has resulted in Democratic voters being deprived of their right to determine our party’s nominees for Town Board and highway superintendent. That the two default Democratic candidates, Mr. Morin and Mr. Harder, are supported by and (at least in Mr. Morin’s case) apparently cooperating with right-wing elements in our community is especially troubling.”

What Kuhn was referring to is a video taken by Morin during an Aug. 10 committee meeting convened to discuss the series of events leading to the suit, filed by Morin and Harder, that ultimately expelled the party’s committee-endorsed candidates from its ballot line.

Almost two weeks after that meeting, Keith Wiggand, a former Bethlehem Republican Committee Chair, posted a portion of the video on Facebook and announced he was calling for an investigation into potential criminally fraudulent behavior by BDC leadership. The video shows Kuhn attempting to explain to committee members the sequence of events leading up to that moment. The committee had been under pressure to select substitutions with expediency, he said, because one of the committee members, Pam Skripak, “was going to be out of the country for a very significant portion of the time between July 11 and July 21.”

Because the committee filed notarized documents dated July 11 and bore Skripak’s signature, Wiggand took Kuhn’s statement to mean that Skripak was not in the country on July 11 and, therefore, that the documents were forged or illegally notarized. While he filed a complaint with the Albany County Board of Elections, elections commissioners declined to investigate the matter, saying that it could easily be handled by State Police. Wiggand told Spotlight he intends to go to them as well. “I’m hoping somebody gets arrested and maybe a couple of lawyers get disbarred,” he said.

Kuhn maintains that he meant Skripak would be out of town for some of the time between July 11 and July 21 (which is when filing deadlines fell), not the entire time. Several committee members have confirmed that they saw her on July 11 at Joanne Cunningham and Brent Meredith’s home, where she signed the documents in question. Skripak herself has said she will happily provide proof of her travel arrangements. Unmoved, Wiggand said he will let investigators decide if there was any wrongdoing.

Presiding over the Facebook page ‘Bethlehem Resident News,’ Wiggand has been ruffling the feathers of the town’s Democratic leadership for months, posting incendiary diatribes about the actions of town government and, more recently, targeting the committee’s internal turmoil.

When committee members composed a Facebook rebuttal criticizing Wiggand as an “internet troll” and urging residents not to confuse his page for legitimate or official news, he accused them of treading on his first amendment rights. He was upset that they referenced his departure from the town’s Republican Committee in 2004, when he resigned his chairmanship and state-appointed job at the same time that the inspector general’s office was investigating him for misusing state resources. (Thirteen years later, Wiggand said that he left both positions without being asked to leave, claiming, “I had just had enough of the politics and got out.” It was reported at the time that, under the threat of termination, he refused to return a state-owned computer and resigned five days later before being fired.)

Wiggand told Spotlight that the committee’s Facebook post, in part, spurred him to charge its members with criminal fraudulence when and how he did. “They made a big mistake by going after a private citizen personally. I have a constitutional right to have my opinions on political matters,” he said, implying that the committee’s post on Facebook was intended to stifle his freedom of speech.

“He clearly doesn’t understand the first amendment,” said Kuhn, pointing out that the post did not have the effect of silencing Wiggand, but essentially returned fire using the same social media platform he so often wields.

When Wiggand initially released the video segment, Morin denied providing him with the recording. In a text message exchange at 3:30 p.m. on Monday, Aug. 21, after being asked whether he had sent the video to Wiggand, Morin responded, “What? And what video?”

Morin repeatedly denied that it was his recording over the course of another text message exchange around 8:30 p.m. last Monday, saying, “No it was not me,” and implying he could produce a different recording taken from his phone. He was invited to do so.

On Tuesday night, Morin sent the following email to Spotlight (and asked that it be reported in its entirety, without edits):

“When you recently texted me, I was half asleep. Of course, I shared the video with Keith. When I found out that what Dan Coffey and Jeff Kuhn did with the certificates of substitution was criminal, I provided the video to my lifelong friend whom I knew would ensure that the criminality would be properly investigated instead of swept under the rug. I may have acted out of annoyance and spoke rashly to you via text, and for that I apologize to you, the Democratic Committee, Democratic voters and all of Bethlehem’s citizens. I am not perfect, but if the citizens of Bethlehem elect me as their highway superintendent, I will work with David Van Luven and the new Democratic Town Board to restore the quality of service in the highway department that we all have missed during the past four years.”

Morin was passed over for endorsement in the last election cycle and again earlier this year. He has voiced dissatisfaction with the way the Highway Department, where he has worked for 13 years, is currently run. After he declined to re-submit his name in the wake of Meredith’s declination, he and Harder worked with Elections Commissioner Matt Clyne to file the suit that got Wagoner and Coffey tossed off the ballot line. Clyne, who lost leadership of the committee to Kuhn several years ago, told Spotlight that he alerted Morin and Harder to the mistake on the filed certificates but neglected to tell Wagoner, Coffey or any BDC member, which may have given them an opportunity to fix the error.

“I didn’t have to tell them,” said Clyne. “It was a judgment call.” He said he disapproved of the way committee leadership had selected substitute candidates.

Wiggand, so often at odds with Bethlehem Democrats, has seemingly crossed party lines to take up the cause of Morin and Harder, men he characterizes as victims of a party leadership intent on silencing any voices of dissent.

BDC members argue that, contrary to silencing anyone, each potential candidate was given the opportunity to make his case before the committee voted on which one they would support in May. In that vote, and another one in August, the committee overwhelmingly chose not to support Morin or Harder.

“While Giles and I are disappointed the Democratic voters of Bethlehem are denied the opportunity to vote at a Sept. 12 primary, we remain on the November ballot on the Working Families line,” said Coffey after the hearing the appellate court’s decision. We will continue to campaign hard, as we feel we are the best candidates for these two positions and the voters of Bethlehem will ultimately choose the best persons for the jobs regardless of where the names happen to appear on the ballot.”

The full Bethlehem Democratic Committee will meet on Thursday, Sept. 14 to discuss how to approach the impending general election and decide whether to support Wagoner and Coffey on the WFP line, and risk splitting votes, or support the candidates who will appear on their party’s line, which seems unlikely in light of recent events.

“In the meantime,” said Coffey, “I will continue to go door-to-door and discuss issues of concern to Bethlehem’s citizens.”

As of Friday, Aug. 25, Kuhn said he had heard nothing about a possible BCI investigation regarding the statements he made on Morin’s video — and didn’t expect that he would. On Sunday, Wiggand stated that he filed the complaints on the week of Aug. 21, but was informed it could take a while before he receives a response.

“We look forward to working with the presumptive new town supervisor, David VanLuven, the new town council, responsible Democratic committee members and rank-and-file voters,” said Morin and Harder in a joint press release on Saturday, Aug. 26, “to ensure quality of life in Bethlehem by restoring competence and integrity to Democratic town government.