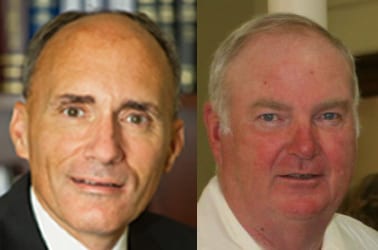 Dan Coffey (L) and Giles Wagoner (R) have appealed for the right to appear on a Democratic primary ballot on Sept. 12 (File photo)

BETHLEHEM — Oral arguments have been heard in the appeal of an Aug. 1 decision by State Supreme Court Justice L. Michael Mackey that invalidated substitution certificates allowing Dan Coffey and Giles Wagoner to appear on a primary ballot on Sept. 12 for the positions of town board member and highway superintendent, respectively.

A lawsuit filed by Democratic opponents George Harder and Dan Morin in late July, alleging that errors on the certificates were sufficient to invalidate Coffey and Wagoner’s place on the Democratic line in the upcoming election, led to Mackey’s decision, which has been appealed by the Bethlehem Democratic Committee and its endorsed candidates.

Oral arguments were heard before the State Appellate Division on the morning of Thursday, Aug. 24, and a decision is expected by the morning of Aug. 25. BDC leadership appears cautiously optimistic that Mackey’s decision will be overturned.

Delmar PO has not received copies of The Spotlight