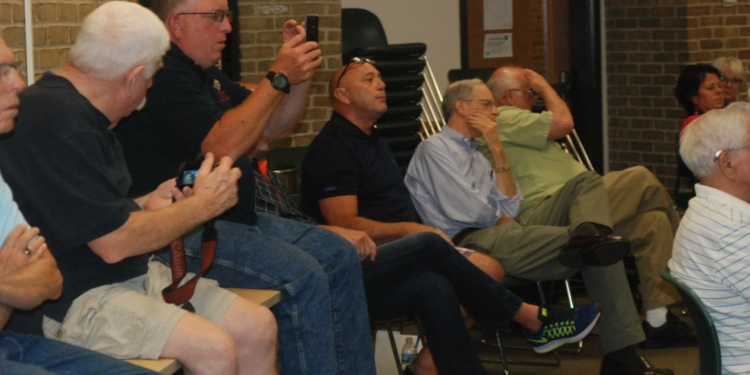 BETHLEHEM — Adding yet another level of dysfunction to the upcoming town elections, a former Bethlehem Republican Committee chairman has filed complaints against the current leadership of the town’s Democratic Committee, alleging criminally fraudulent behavior in the designation of two substitute candidates in July.

Keith Wiggand, who is also behind the conservative Facebook page “Bethlehem Resident News,” obtained video of an Aug. 10 Democratic Committee meeting during which members were discussing how to move forward after lawsuits filed by two Democratic candidates may have bounced their committee-endorsed opponents off of the primary ballot.

Dan Morin, one of the litigants who filed the lawsuits, said that he has no idea how anyone would have gotten a hold of the video he took during the meeting, although it is clear that was the video posted by Wiggand on his Facebook page. According to Morin, he neither posted the video nor shared it with anyone.

While Wiggand refused to disclose how he acquired the video, he is using it to allege that Pam Skripak, a member of the town’s Democratic committee leadership whose signature is on a document notarized on July 11, was out of the country at that time. If true, members of the committee could face criminal charges, an outcome Wiggand said he hopes for.

In the video, BDC Chairman Jeff Kuhn is explaining to committee members why a decision was made to choose BDC First Vice Chairman Dan Coffey to replace Giles Wagoner in his run for Town Board, after Wagoner was chosen to replace Brent Meredith after he declined to run for Highway Superintendent. One of the reasons he said they did not feel they would have time to re-open the interview process for that seat was that Skripak “was going to be out of the country for a very significant portion of the time between July 11 and July 21.”

That 11-day period represents the only time the committee could submit their substitution certificates to get the replacement candidates onto the primary ballot.

“The whole basis of Mr. Wiggand’s absurd and frivolous complaint is his mistaken belief that I stated on August 10 that Pam Skripak was out of the country on July 11,” Kuhn told Spotlight News. “I made that statement explaining the scheduling and logistical challenges that prevented us from soliciting resumes and conducting interviews for the town board vacancy created by Giles Wagoner’s declination before the July 21 deadline.”

According to Kuhn, the committee to fill vacancies — Kuhn, Coffey and Skripak — signed the form on July 11 at the home of Meredith and his wife, committee member Joanne Cunningham, with several other committee members present.

Joanne and Maureen Cunningham, as well as Town Board member David VanLuven, have confirmed that Skripak was at Joanne’s home on July 11. “She was sitting at my kitchen table, along with a lot of other people,” said Joanne, who characterized the complaints as ridiculous. “I remember what glass of wine I served her.”

Skripak has told Spotlight News that she is happy to provide proof of her whereabouts at the time.

“That’s a very serious allegation and he’s making it totally recklessly, and without even closely listening to the video that he is basing those allegations completely on,” said Kuhn. “If he continues to make these allegations after it’s been demonstrated they’re baseless, then he is facing some pretty serious repercussions.”

“When it is demonstrated conclusively that there is no merit to these allegations, we will await Mr. Wiggand’s retraction and apology,” said Kuhn.

Wiggand, however, has indicated that an apology is unlikely to be forthcoming.

“I’m also submitting a complaint with the New York State Police BCI unit, for offering a false instrument for filing and several other criminal charges. I’m hoping somebody gets arrested and maybe a couple of lawyers get disbarred.”

Asked if the video could not be interpreted in the way Kuhn said it was meant, Wiggand replied, “We will let the investigators make that judgment.

“They made a big mistake by going after a private citizen personally,” he said, referring to a Facebook post by the Democratic Committee on Friday, Aug. 18, in which members criticized his page as inflammatory, hyperbolic and misleading, and then pointed out that Wiggand resigned his position as chairman of the Bethlehem Republican Committee and his politically appointed state job in for misusing state property in 2004. Wiggand said the criticism is, in part, what prompted him to file the complaints against committee leadership when he did.

“I have a constitutional right to have my opinions on political matters,” said Wiggand, implying that the committee was endeavoring to stifle his freedom of speech.

“He clearly doesn’t understand the first amendment,” said Kuhn, pointing out that the post by the Democratic committee did not have the effect of silencing Wiggand, but merely returned fire by calling into question his character in much the same way that members felt he had been doing to them.

While Albany County Board of Elections Republican Commissioner Rachel Bledi said she and her Democratic counterpart Matt Clyne have decided not to pursue an investigation, she added that Wiggand was welcome to file complaints with the New York State police.

Note: An earlier version of this article stated that Wiggand was fired from his state job in 2004. He, in fact, resigned that position.

Carver celebrates ten years at Port of Coeymans, thanks community

Acorn Advice: Let’s hear it for the girls