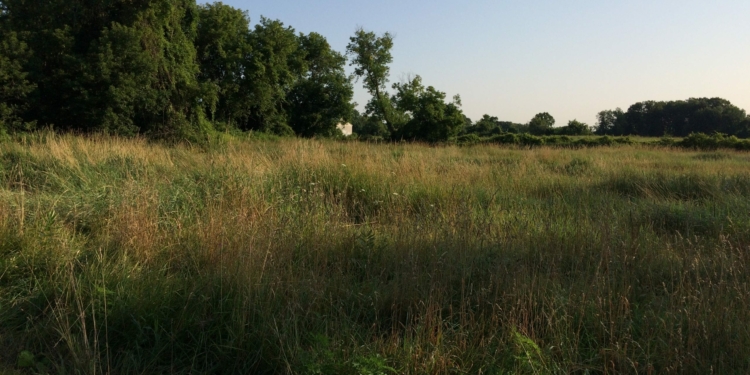 For more than a century, the Kleinke family has owned farmland along Kenwood Avenue in Elsmere and Glenmont. But, 70 acres is under contract to a developer with intent to build housing on this portion of the farmland. (Photo by Michael Hallisey / Spotlight News)

GLENMONT — While a large chunk of the Kleinke farm on Kenwood Avenue is in imminent danger of being developed,  it’s not a Kleinke who’s selling the land.

After repeated attempts by the family to reacquire the land following the death of Peter Kleinke, the Kleinke clan is turning to the community for help convincing his former wife to abandon her plan to sell to a developer and, instead, return the property to the family to maintain as open space.

According to Ryan Kitchen, a fifth generation Kleinke by way of his mother, Deborah Kleinke Kitchen, the farmland has been in his family for more than a century, ever since his forebears moved to the countryside from Albany in 1915. Deborah and Ryan have a clear connection to, and love for, the land on which they were both raised, and the topic of its impending development is an emotional one for each.

“Three of four died there,” said Deborah. She has fond memories of delivering fresh milk and eggs from the former Glensmere dairy farm with her father, ice skating in the fields, helping to bring in the hay after sunset and of myriad other moments spent with her family.

Over the years, ownership of the initial property at the border of Glenmont and Elsmere has been divided among the family, explained Ryan. “It was owned by three siblings until October 2015, when my grandfather’s twin brother passed away. He owned the original farmstead, 70 acres, the dairy, the old barns. His wife was not a Kleinke and it doesn’t mean anything to her.”

Linda Dwyer is the newly remarried widow of Peter Kleinke, the twin brother of Deborah’s father Paul. According to the Kitchens, Dwyer hasn’t been interested in running the farm she inherited when her late husband died.

“So, she’s decided that she doesn’t want it anymore,” said Ryan. “Which is fine. We just want our first refusal and we didn’t get that. She went immediately to a developer and signed a contract.”

The Kitchens said they have not only gone to Dwyer with a matching offer, but also offered to pay any costs incurred by breaking her agreement with the developer. Still, they said, she has consistently declined the offer.

At present, the land has been under contract for at least a year and there are preliminary plans for two developments, one comprising more than 60 buildings — 31 single-family homes and 32 townhomes — at 65 Kenwood Ave. (an alternate plan consists of 53 single-family homes), and a smaller development across the street, at 48 Kenwood Ave., consisting of 11 single-family residences. Both projects went before the town’s Development Planning Committee in September 2016, but, as of late July 2017, the Planning Department has only received a subdivision application for the larger development at 65 Kenwood. Nothing has been scheduled for review by the Planning Board as yet, but Planning Director Robert Leslie said that he could see that happening in the near future.

“We’ve been working on a business plan,” he said. “To keep it farming, open space, useable to the public. We’re on the Rail Trail, we have access to Magee ballpark, we have so much stuff that we can do that isn’t houses.”

“We even drafted a purchase proposal, in the hopes that she would change her mind and sell to family,” said Deborah, explaining that they have a vision to use at least some of the parcel for an agritourism business similar to Indian Ladder Farms. “It has a variety of different possible uses,” she said. “There’s a whole gamut of ideas in the business plan.”

According to Deborah, the family has met with community members who have signalled support for their ideas, including at least one businessperson who reviewed the plan and pronounced it viable.

But none of that matters if Dwyer won’t sell them the land.

“We asked her what the Kleinkes did to her to make her so upset,” said Ryan. “I don’t know.”

“She thinks that farming is a hard life and that she’s doing us a favor,” said Deborah. “Or, at least, that’s what she has said. And it’s not easy. But, it’s not her decision if that’s what we choose. She didn’t even give us a chance to save it.”

Explaining that Dwyer is her godmother, Deborah called the situation “a little bit of a disconnect,” and seemed uncomfortable with the conflict. Ryan, on the other hand, seemed more than ready to go to the mattresses.

According to Deborah, Dwyer initially cited high property taxes as the reason for selling to developers, but resisted attempts to connect her with the town’s conservation easement exemption program, which could have reduced those taxes by as much as 90 percent. Then, Deborah said, Dwyer indicated that she was unwilling to break the deal she had made with the developer, Anthony Cardona, even after the family offered to pay any buy-out fees. Their last communication was six months ago, when Dwyer told her in an email that she expected the matter was closed.

As a courtesy, Cardona met with the Kleinke clan and showed them his plans for the property. The Kitchens say he resisted entreaties to maintain it as open space and was unresponsive to a request to carve out seven acres, the minimum for an agricultural district, and keep the barns intact.

Disheartened and approaching desperation, the family recently decided to reach out to the community. “I think we’ve tried every respectful route,” said Ryan. “I was hoping it wouldn’t come to this point where we have to go public. But I just can’t sit back and watch this happen.” His new hope is that residents will show up at town board and planning board meetings in opposition to the development proposal. He also suggested that a town-wide effort to save the property from development might prove more successful.

Hoping also to connect with potential investors, Ryan has a GoFundMe page set up and ready to activate in the event that Dwyer becomes willing to sell the farm back to the family (the price tag is likely to be somewhere just north of $2 million). Noting the current community conversation surrounding conservation of open spaces, Ryan said he believes town residents would be happy to invest in the conservation of the Kleinke farm. He has been encouraging people to send photos of the property to the town’s Scenic Bethlehem project, which is identifying open spaces in the town that residents value and feel are worthy of preservation. A ‘Save Kleinke’s Farm’ Facebook page is likely to be up and running soon, as well.

Ryan, who earned his degree in Economics from Siena College in 2015, has three siblings, all of whom have their own individual ideas and talents they want to contribute to the future of their family’s land. One is an artist, another an event planner. Even if they fail to save that parcel of land, Ryan said he might launch his GoFundMe page anyway. “I have great plans for the Kleinke Farm,” he said, “But everything costs money.”

If they don’t succeed in acquiring the property, Deborah worries that many of the ideas they’ve been hoping to explore will become untenable due to insufficient acreage. “Our land is currently being used for growing produce,” she said, noting that their farm stand at 96 Kenwood Ave. is still open for business seven days a week. “But we would need more land to support multiple uses.”

“It’s been heartbreaking,” she said, brushing tears from her eyes. “It’s hard to describe what it’s like watching something you’ve known your whole life disappear.”

Multiple attempts to reach Dwyer for comment were unsuccessful.

Colonie couple traded NYC chef careers to start a farm on Forts Ferry Road, and have no regrets