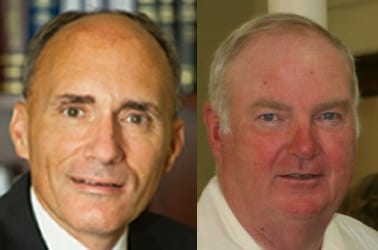 Dan Coffey, left, and Giles Wagoner will not be able to appear on the Democratic ballot line in November, even though they have the overwhelming support of the Democratic Commitee

BETHLEHEM — Following a decision signed by State Supreme Court Justice L. Michael Mackey on Tuesday, Aug. 1, Dan Coffey and Giles Wagoner will no longer appear on the Democratic ballot line in November, nor will they be able to primary Democratic opponents Dan Morin and George Harder, the men who filed the lawsuit that resulted in Wagoner and Coffey losing the ballot line.

Morin and Harder, after being passed over by the Bethlehem Democratic Committee (BDC) for endorsements, gathered enough petitions to challenge the party-endorsed candidates in the September 12 primary election. When Highway Supervisor Brent Meredith declined to run again, the committee had a limited amount of time to choose replacements and re-opened the interview process. Morin, who had already interviewed with the committee for that position, refused to do so again. A decision was made to run Town Board member and candidate Giles Wagoner for Highway Supervisor instead, opening up a spot in the Town Board race. Coffey, who was a member of the committee to fill vacancies along with Jeff Kuhn and Pam Skripak (all three are part of BDC leadership), stepped into that race.

The issue outlined in lawsuit concerned one of three sections on the substitution certificates filed by BDC — the affidavit section. While all the necessary signatures appear on another section on the same certificate, which was also notarized, committee members failed to sign the affidavit portion of the certificate as well.

Coffey and Wagoner argued that the lawsuit be dismissed as they felt they had demonstrated substantial compliance, and cited case law to that effect. They also requested Mackey recuse himself due to the fact that he had a previous relationship with Albany County Board of Elections Democratic Commissioner Matt Clyne and questioned the validity of the lawsuit itself, as it was notarized by Clyne, who also appeared as a respondent.

“While the undersigned and Clyne worked together in local politics and government for many years (including most recently in roles as county legislator and elections commissioner, respectively),” wrote Mackey in his decision, “this relationship does not influence the court’s conduct nor affect the court’s impartiality, nor is the court influenced by previous interaction with various counsel and parties involved in this matter to the extent they have been involved in local government and politics when the undersigned was a practicing lawyer, county legislator, town attorney or town political party leader. Other than attending lunches with Clyne and other political leaders and lawyers, we have not socialized together.”

Mackey cited a number of state court cases in which minor omissions or mistakes on certificate of substitution filings have cost candidates their ballot line, including one that invalidated republican replacements who signed the affidavit as committee officers, failing to reference their status as members of the state-mandated committee to fill vacancies. “Based upon the above-cited precedent,” wrote Mackey, “the certificates of substitution here must be declared invalid because the members of the committee to fill vacancies neglected to execute the requisite affidavit.”

Due to Mackey’s finding, Coffey and Wagoner may no longer appear on the Democratic party line in November but, as they filed the substitution paperwork for the Working Families Party a different way, they would still be able to appear on the WFP ballot line, potentially splitting the Democratic vote in the general election.

Update (8/2; 11 a.m.): Coffey and Wagoner have filed an appeal and will be heard by the Appellate Division, Third Department on August 24.

“The voters should not be denied the right to choose based on a paperwork technicality,” said Coffey.