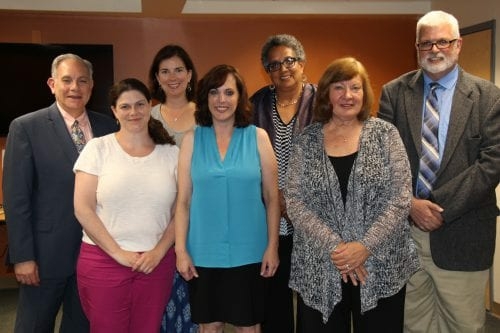 BETHLEHEM — New board members took their oaths of office during the organizational meeting of the Bethlehem Central School District’s Board of Education on Wednesday, July 12, and elected officers for the 2017-18 school year.

Lynne Lenhardt, who has been on the board for more than 25 years, serving as both president and vice president, was nominated by member Charmaine Wijeyesinghe to replace Matt Downey, who chose not to run for re-election, as the board’s president. Despite support from Wijeyesinghe and Michael Cooper, however, Lenhardt was defeated by a vote of 4-3. Board member Christine Beck, now serving her second three-year term, was subsequently nominated by Jonathan Fishbein and elected president by the same margin, supported by Fishbein, Holly Dellenbaugh and Meredith Moriarty.

The officers assumed their duties immediately, and Beck immediately called for the next agenda item: the selection of the vice president. Wijeyesinghe nominated Cooper and was seconded by Lenhardt. Beck then asked if there were other nominations and Fishbein nominated Lenhardt. In a brief awkward moment, Cooper accepted the nomination and then capitulated to Lenhardt, who seemed reluctant to accept her nomination to remain in the role of vice president if Cooper intended to pursue the seat. He rescinded his acceptance, after which Lenhardt was unanimously approved and sworn in by Beck.

In addition to president and vice president of the Board of Education, District Clerk Brittany Barret and Supervisor Jody Monroe were both sworn in and all of the board members volunteered to serve on various committees, such as audit, facilities or policy. A number of other positions were appointed and/or bonded, and 2017-18 calendar of board meetings was approved. The entire 40-minute meeting can be viewed on the district’s website, www.bethlehemschools.org.