Bethlehem Town Board Republican candidate Jim Foster talks about his background, his views on town government and his decision not to run for town supervisor this time around 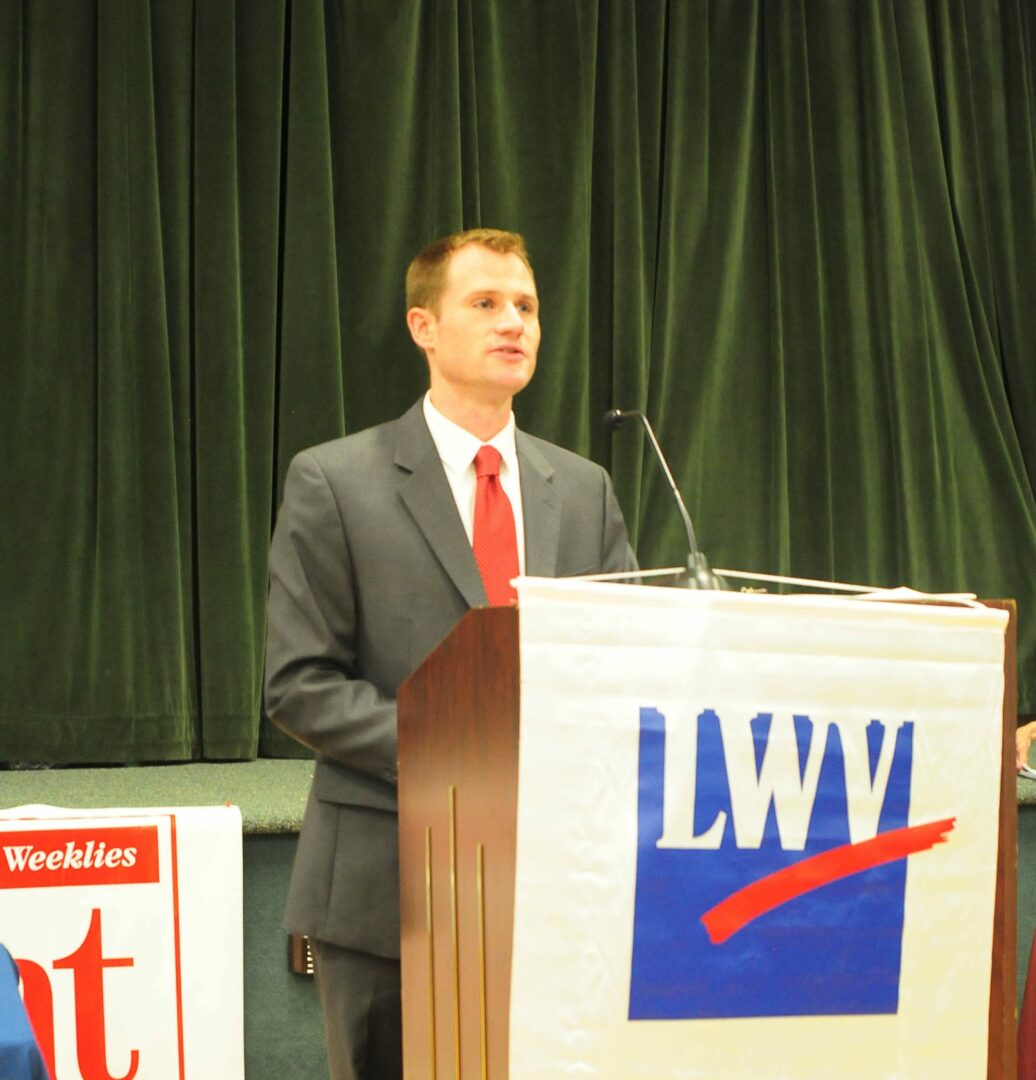 Jim Foster is back on the Republican ticket for Bethlehem’s town elections in November, but this time as a Town Board candidate. // File photo

Even so, he will not be seeking the office again this fall, even after Clarkson announced earlier this year that he feels his time serving as supervisor has come to a logical end and he will not be pursuing re-election.

Citing career and family obligations, Foster has instead chosen to run for a seat on the Town Board, a position that would allow him to continue working at the Albany law firm he’s been with for more than a year and which he feels has invested considerable resources in his professional success. (The town supervisor position would have required a full-time commitment.)

His decision, said Foster, should not however indicate diminished concern for the direction and decisions of town government.  “My view is that I don’t necessarily need to be in the top position to have a positive influence,” he said. “It all comes down to wanting to make a difference and wanting to make a change.”

Foster’s family has been in Bethlehem since the 1940s. His grandfather was a first generation immigrant from Eastern Europe, a depression-era farmer whose progeny has largely remained in the area. Foster’s sister and her husband live in the town, as do a number of aunts, uncles and cousins. He, unsurprisingly, was born and raised here.

“I’m incredibly passionate about this town,” said Foster, who has been a volunteer firefighter with the Elsmere Fire Department since 2001. “I’ve seen a lot of change, some of it for the better and some of it for the worse. And, I think it’s easy for a lot of people to complain and say, ‘Well, I disagree with this,’ or ‘I’d prefer to see things done that way.’ But I’m a firm believer, and always have been, that if you want to see a change, if you want to make good things better, you’ve got to step forward. That’s my view and I would encourage more people to become involved in the political process.”

His passion for Bethlehem, said Foster, is what brought him back to the area when he went to law school.

After graduating with honors from Georgetown University with a double major in Government and Psychology, he worked for a time as a Senior Auditor at UHY Advisors in Washington, D.C, where he was granted top secret security clearance and provided consulting services to various federal agencies, including the Department of Defense, but he said that he always knew he wanted to return to school and earn his law degree. He was accepted to a number of law schools in New York City and D.C., but chose to return to the Capital District.

“I knew I wanted to be near Bethlehem, because that’s where my roots are,” he said. “I had always envisioned myself practicing in the Albany area right out of law school.” Foster received a scholarship to Albany Law and enrolled in 2007, attending classes while volunteering with Elsmere and working part-time at a law firm in Troy.

Today, Foster lives in Delmar and practices law with the Corporate Group of Couch White, LLP in Albany. He sits on the Advisory Council of the Bethlehem YMCA and on the Board of Directors of the Elsmere Fire Company, where he continues to serve as an active firefighter. He’s also working to promote openness and communication between the town and its residents, as well as improve the quality of the larger political conversation on both sides of the ideological aisle.

The biggest change Foster has said that he would like to see in Bethlehem town government is the way elected officials communicate with residents.

“I think we’re moving away from open, honest discussion — before the board and elsewhere,” he said. “I’m a firm proponent of open debate, open discussion that is respectful of one another’s views. There are a lot of attorneys I work with, day in and day out, and we represent clients on opposing matters on opposing sides, but it’s always done with civility and, at the end of the day, we’re part of a greater community and profession. There’s nothing wrong with disagreeing — as long as you’re representing the best interests of the community or client.

“Unfortunately,” he continued, “I see, time and time again, a very narrow view espoused or tolerated in front of the Town Board and there is almost a shouting down or dismissal of opposing views. To me, that’s very concerning and I don’t think it does any service to the public discourse.”

Even when confronted with views that he “adamantly” disagrees with, Foster said he believes respect for, and open discussion of, those viewpoints can only improve the public discourse.

He was disappointed, he said, with the handling of the residential property recollection issue back in March, when the town announced its intention to update its inventory of residential property values. At the time, the town’s Sole Assessor Laurie Lambertsen went before the board to request approval to undertake a town-wide “residential assessment inventory recollection project,” essentially stating that hired appraisers would be asking to enter homes in order to accurately assess their value. The motion passed 4-1 and, in short order, town residents took note — and more than a few took issue.

“There was some misinformation put forth by the board,” said Foster, adding that he was choosing to believe it was unintentional. “But, rather than acknowledging or owning those mistakes, or the in-artful or imprecise manner in which it was discussed,” he said, “it became this finger-pointing and accusing people of trying rabble-rouse, create issues, or stir the pot. And that is not what that discussion, in my view, was about. It was about properly informing residents.”

Saying he was glad that, ultimately, the town backtracked and said home entry assessments would be limited, he stressed, “But that was not the initial thing that was discussed or put forward by the board.

Saying that he prefers “dealing solely in facts, not speculation or conspiracy theories,” Foster continued, “I don’t think getting away from the facts helps the residents. We don’t do ourselves any favors if we misinform the public. That’s the last thing we want to do.”

He mentioned a politically conservative Facebook page that, under the guise of ‘news,’ tends to hyperbolize and sensationalize town issues, very often in a misleading or inaccurate way.

“Obviously, I have a minimal influence on what goes on on social media,” he said. “There have been times I’ve tried to chime in and point out misstatements, but we all know how that goes, right?”

Due to the political nature of the page, Foster said that people tend to assume he must agree with all of what it says because he is a Republican, but that isn’t the case. “There’s a lot of it that I disagree with,” he said. “But, if you try to correct some of the misinformation, you end up going down this horrible rabbit hole and I decided to stop getting involved because it’s not constructive. I think we can rise above that.”

Fiscal responsibility and empowerment of the individual are the two major ideas that inform Foster’s party affiliation, he said, noting that his grandfather’s work ethic and sense of personal responsibility were an early influence. “I don’t know what political affiliation he was, I just know what kind of principles drove him. Unfortunately, I think, all too often people get caught up in labels.”

While he opposes new taxes and is “not into government making choices on behalf of the citizenry,” Foster said that he also sees eye-to-eye with his Democratic friends on certain issues — “It doesn’t mean I’m not a Republican or they’re not a Democrat” — and that he prefers to consider each issue on its merits.

“I’m generally a pretty personable guy,” said Foster. “I have the ability to work collaboratively with people that I strongly disagree with.” He spoke well of other members on the Town Board, calling Joyce Becker “a huge asset to the community” and asserted that he doesn’t even believe that there should be a significant political divide in town government.

“That’s the luxury of dealing with community and town issues,” he said. “It’s about making sure we’re doing the right things for the residents: paving the roads, providing nice parks and recreation. Those are issues that we can generally agree on. Maybe we have different strategies or approaches to how we accomplish it, but we don’t have some of these issues that are tearing people apart at the state or national levels and, unfortunately, result in this vitriol and some of this discourse you see out there that, frankly, I find repugnant and want no part of.”

What he does want, said Foster, is to open up the lines of communication between Bethlehem residents and their town government.

“I would be happy, if I were on the Town Board, to be put in the hot seat by a resident,” he said, criticizing the public comment period at the board’s bi-monthly meetings for its unilateral nature. “I want to have those talks, rather than just saying, ‘Thanks for your comments, now take a seat.’ That conversation is important.

“We can be sure that we do create an atmosphere in which people can feel comfortable and respected and espouse their views,” said Foster. “And that they won’t be shouted down and they won’t be dismissed and asked to take a seat without any engagement from the board, because the board doesn’t deem their viewpoint worthy of discussion or furthering, and I’ve seen that, unfortunately, more often than not.”

Like his race for supervisor two years ago, Foster has been endorsed by the Republican, Conservative and Independent parties in his run for a seat on the Town Board. Two seats are up for election this fall, with a potential third available if David VanLuven wins the race for town supervisor against Republican challenger Gary Fish. Board member Julie Sasso has decided not to run for another term and Giles Wagoner, who replaced Bill Reinhardt, will run for his first full term. Wagoner and newcomer Maureen Cunningham, of the Hudson River Watershed Alliance, have been endorsed by the Bethlehem Democratic Committee; Foster is the only Republican candidate to have been endorsed by his party for a seat on the Town Board.

“I think, as a Town Board member, I would bring a unique perspective,” Foster said, again citing his legal expertise and long-standing ties to the town. “But, at the end of the day, we all serve at the pleasure of the community, not vice-versa. We need to be held accountable to them and we owe them answers.”