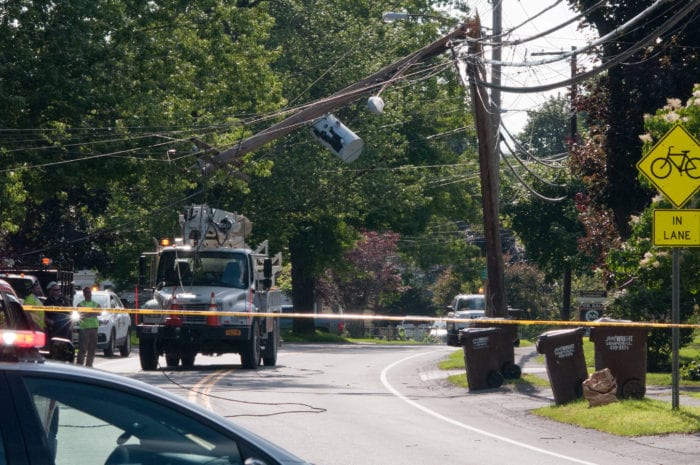 DELMAR — Several witnesses said they heard a snap, followed by the crackle of electricity, after a utility pole along Kenwood Avenue splintered shortly before rush hour traffic.

No injuries were reported.

The pole snapped at approximately 4:30 p.m. along one of the town’s busiest thoroughfares, knocking out power to approximately 300 residents. The fear of live wires prompted a response from Delmar and Elsmere fire departments and Bethlehem Police to redirect traffic away from the 400-600 block of Kenwood Avenue.

At this hour there is no information to explain what caused the pole to snap. Service crews from National Grid were present to inspect the damage. The pole appeared to be snapped approximately 12 feet above the ground, the top of which was partially severed and appeared to be supported by the tension of the telephone and electricity wires. One wire was apparently down on the ground, from which people were directed away.

At this hour of the day, motorists traveling home from Albany by means the Cherry Avenue extension would be driving through. Instead, the scene was peppered by police, fire and utility crews. Neighboring residents took to sitting on lawn chairs to watch the scene.

BETHLEHEM LIBRARY: Evenings on the Green