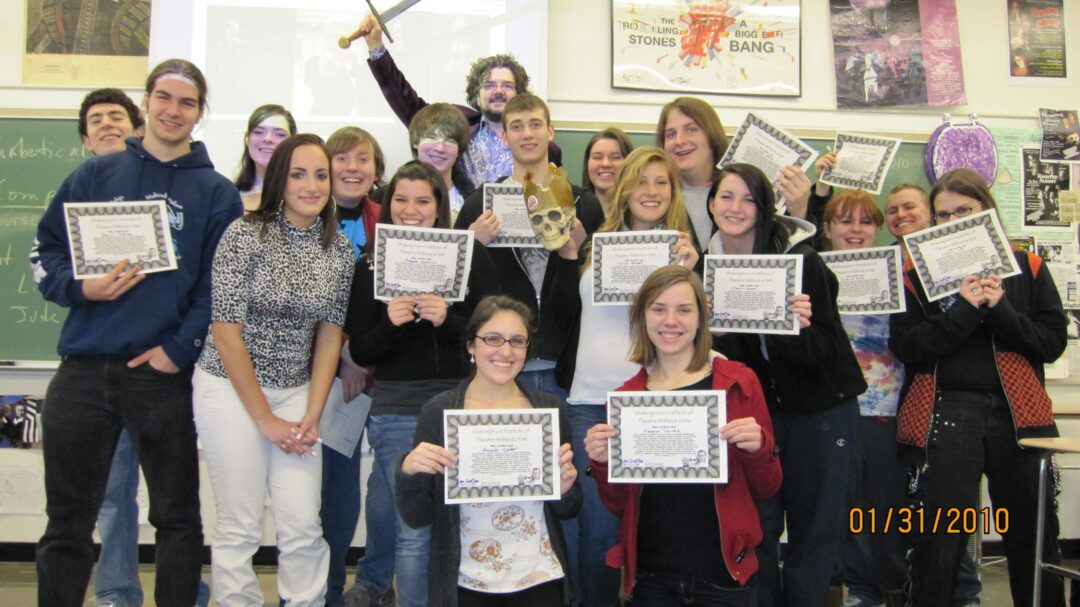 Yeara poses with the cast and crew of Bethlehem High School’s 2010 production of Shakespeare’s “The Merchant of Venice.” (Photo submitted)

BETHLEHEM — “Grading is one of the worst parts,” said retiring Bethlehem Central High School teacher James Yeara. “I’m terrible at the grading; it’s not the best part of teaching.”

He laughed. “The grading is crap.”

Yeara, who has taught English and theatre at BCHS for 32 years, said the Bethlehem community and its students are what has kept him in the district for more than three decades, enduring early mornings, online parent portals, standardized testing (which he called “awful”), an administration he feels can be largely bureaucratic and, of course, grading homework.

“I’ve been saying I’m going to retire for years,” he said. “Now I really mean it.”

At the outset of the school year, Yeara was not considering retirement but said he reconsidered after experiencing health issues throughout the rigorous rehearsal schedule of the high school musical, The Wizard of Oz. When he still felt poorly going into the spring play in early April, his doctor demanded he go to the emergency room.

“Five days later, I had three stents in my heart,” he said. On the day he went to the hospital, he submitted a letter of retirement because he felt that his course load and rehearsal schedule had become unmanageable. “I just couldn’t do it,” he said, joking that he celebrated his decision to retire with a five-day stay at St. Peter’s Hospital.

Not to worry, said Yeara, the surgery went well and his heart is in good shape. He has plans to enjoy his retirement years, and, even, to return to the high school to direct all three of the annual plays — at least, for next year. Unsure who will carry on the work he has done for theater at BCHS, he hopes he will be able to provide some sort of continuity for the program and, sharing the lessons he has learned over 32 years, mentor an English-teaching colleague to take his place.

They’re big shoes to fill. In addition to teaching all the theatre classes offered at the high school, Yeara directed all three annual plays — a fall Shakespeare production, a musical and a spring play. He has implemented courses such as a class on major dramatic comedies and spent the last three decades fighting for funding and support from the school’s administration.

He’s especially proud of the annual Shakespeare production, something he says is not commonly offered at public high schools. “It gives the students an advantage, in life, but also if they go on to do theatre,” Yeara said.

A number of former students have gone on to have successful careers in theatre. One is teaching theatre at Oxford, another is currently acting in a play on Broadway with Kevin Kline, and another runs the theatre program at the Washington Park Playhouse in Albany.

But, said Yeara, his favorite stories are not of those who reached theatrical heights. They’re of those who overcame their own personal limitations through theatre. He recalled one student who came to him with a serious speech impediment and, by the end of high school, played Malvolio in Shakespeare’s Twelfth Night. Another, he said, had a fear of public speaking and took his theatre arts class in an effort to overcome that fear. When she came back to visit Yeara a few years after graduation, he found out that she had become a motivational speaker for professional athletes. It is moments like that, he said, of which he is proudest.

“It’s the best thing I do,” he said. “Teaching through theatre.”

While Yeara couldn’t say enough good things about the students and parents he has worked with throughout the years — “Sometimes the parents can be satanic and some of the kids can be posers, but that’s really very rare” — he did say that he has butted heads with the school’s administration many times. One principal even exempted him from attending faculty meetings for three years because “he didn’t like the questions that I asked or the comments that I made,” a suggestion Yeara said he was more than happy to take.

While he missed the retirement dinner at Normanside Country Club, Yeara was still given his retirement swag and said that a letter written by an administrator actually referred to him as a “pariah.” The implication was that he had alienated or angered administrative officials for years by fighting for his programs and his students.

Reading from the letter, he quoted, “‘Jim survived countless school administrators and his constancy is just one reason why the outstanding reputation of so much of what BC has to offer remains.’

“I thought it was weird that they said I made myself a pariah because I advocated for my children and my colleagues,” he said, appreciative of the acknowledgment that he has, in fact, weathered multiple administrations. “So I had to go and look it up . . . I mean, I knew the administrators haven’t really liked me but I didn’t think I had made myself an outcast.”

Pariahs, he explained, belonged to the lowest caste in India and would lead religious processions while banging on a drum also called a pariah. “They would lead the ceremonies and make the most noise,” he said. “So I’m happy to be a pariah!”

Yeara said that he thinks it is “bureaucratic administrators,” of which he believes there are too many, who force certain students and teachers in the role of “outsider” by virtue of the programs and initiatives they support. “We’ve won plenty of theatre awards,” he said. “But, if you look around the school, all you see is sports.”

Financially, the school productions also depend almost entirely on ticket and concession revenues generated at their performances, a situation Yeara said would never happen in the sports program. He again extolled the support provided by involved parents who help to make the productions a success.

“[BCSD Supervisor] Jody Monroe has been really helpful and really supportive,” he said, commending Monroe, incoming BCHS Principal Dave Doemel and outgoing Interim Principal Mike Klugman for permitting him to return to direct the plays next year. Likewise, he said he appreciates that the Board of Education has also been supportive.

In addition to directing at BCHS, Yeara said he has some acting gigs of his own lined up and that he looks forward to returning to his first love, writing. It’s something for which he hasn’t found much time during the last 32 years.

“I never thought I wanted to teach,” he said reflectively. “I always wanted to be a writer. This was supposed to be a short-term thing, but I came here to Bethlehem and I got hooked.”

“It’s the most fun you can have in a school without being arrested,” he said. “Can I say that? I had so much fun and learned so much, and had great conversations with people, both inside and out of the classroom. And I got paid for it!”