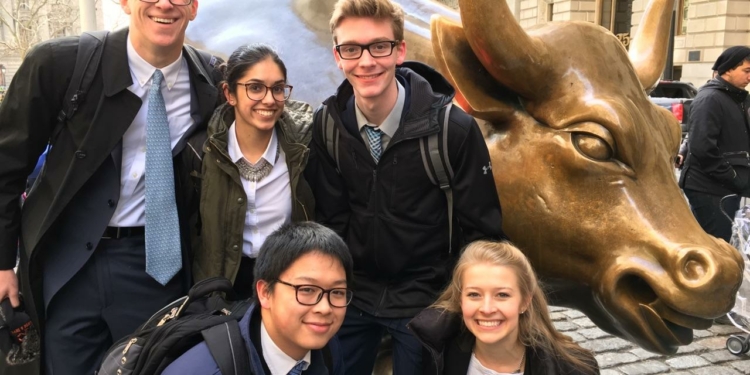 BETHLEHEM — The next time Federal Reserve Chair Janet Yellen has to make a decision on interest rates, said BCSD officials, she may want to check in with the five Bethlehem seniors who were semifinalists in this year’s New York Fed Challenge.

BCHS seniors Corbin Balsan, Bowen Chen, McKenzie Koch, Jaskiran Dhinsa, and Richard Sweeney, worked as a team and with advisor Jason Majewski to defend months of research and economic analyses in support of recommendations on whether the nation’s central bank should raise or lower the target federal funds rate, or leave it unchanged.

After competing against 57 other schools in March, the BCHS team was one of 13 teams to advance to the semifinals of the competition, held annually in lower Manhattan. While they stopped short of reaching the 2017 New York Fed Challenge finals, they were able to do something many other teams could not: accurately predict how the Fed would act on interest rates. Twice.

“We studied a variety of economic data including GDP, unemployment, inflation, markets and other externalities to propose a recommended action for the Fed to take on,” said Balzan, who intends to continue his study of economics at Emory University.

The first round of competition took place on March 13, at which time the BCHS team argued that the Fed should consider raising rates. On March 15, the Fed did just that.

The BCHS team’s performance in March, which included a 12-minute presentation on the economy and a 13-minute Q&A with judges who were also analysts and other employees of the Federal Reserve, helped them advance to the next round of competition in April. Meeting regularly to prepare and analyzing new economic data, the group returned to the competition on April 20 to do it all over again. This time they issued another recommendation: Hold the line on interest rates. On May 3, the Fed announced it would not raise or lower interest rates.

“I guess the judges did not agree with our recommendation at the time but it turns out the policymakers did,” said Sweeney, who will attend Harvard in the fall. “That feels pretty good.”

The Bethlehem team finished in the top eight of more than 50 teams competing, and were the only team from upstate New York to reach the semifinal round.

Majewski, who teaches economics at the high school, said the team began their work on the Fed Challenge in October and all the work was done outside of class.

“The Fed Challenge participants develop an ability to think analytically, make powerful presentations and think on their feet,” said Majewski. “This group had these abilities to begin with and just got stronger as they went along.”

Chen, who will enroll at Brown University, said the group analyzed a lot of data going back to the housing bubble in 2008 and looking forward. “Each one of us focused on a particular research topic but I think what helped us the most was that we had great teammate skills,” he said. “Working together helped us build a really strong argument for our position.”

Teamwork was particularly important when the group earned a spot in the second round of competition.

“Between the two presentations, they had to adjust their outlook and policy suggestions based on new economic data,” said Majewski. “It was a lot of work and I am extremely proud of what they accomplished.”

Dhinsa, who will attend Cornell University, said she had known a little about the Fed Challenge from her brother, who was a team member last year, but that competing as part of this year’s team helped her learn about economics, monetary policy and more.

“I did not have a background in economics before I started, but now I realize how economics impacts everything,” said Dhinsa. “Also, I plan to go into Public Health Science and that involves policy making. The Fed Challenge gave me a great introduction to that.”

Sweeney echoed Dhinsa’s feelings about the subject matter that became a passion project for the five seniors.

“You can’t escape economics,” he said.

Koch, who will attend UCLA in the fall to study biology, agreed, saying, “Economics was kind of a fearful word to me.”

“It’s not anymore,” she said. Smiling, Koch dropped a learned economics term into the conversation to describe how much she enjoyed being a part of this year’s Fed Challenge team.

“I got a lot of ‘utils’ hanging out with this group,” she said as her teammates laughed in agreement. In economics, utils (u’tilz) is a term used to describe units of happiness, or the personal benefits a course of action provides.

It seems the students were not the only ones who racked up utils with during the Fed Challenge experience:

“This group had the right combination of work ethic, social skills and great personalities and I just enjoyed working with them,” said Majewski. “I have had strong students overall but this year’s senior class is special. I just love coming to school.” 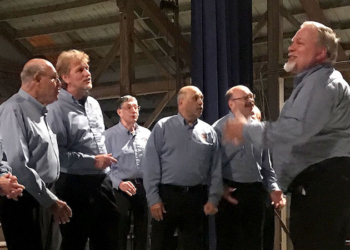