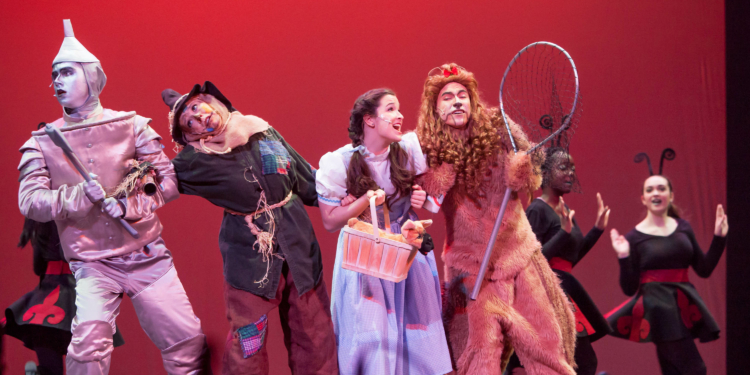 SCHENECTADY — Students from 16 schools participated in the inaugural Capital Region High School Musical Theatre Awards at Proctors on Saturday, May 20. Cast members from individual schools performed selections from ‘Best Musical’ nominees, and came together for opening and closing numbers from “Finding Neverland” and “The Wiz.”

The National High School Musical Theatre Awards (NHSMTA) —  also known as the “Jimmys,” in honor of theatre owner and producer James M. Nederlander — was established in 2009 “to elevate the importance of theater arts education in schools and reward excellence in student performance.” The program reaches more than 50,000 students annually who participate in high school musical theater competitions sponsored by professional theaters throughout the country. Regional winners in the Best Actor and Best Actress categories have the opportunity to compete nationally and perform at the awards ceremony on Broadway.

Styled after the Tony Awards, and co-presented by Proctors and the Times Union, the May 20 program was studded with excerpts of some of the winning performances, medleys, dancing and ensemble numbers featuring students from all 16 schools. In between, awards were announced and talent was recognized, onstage and backstage. Niskayuna and Voorheesville took home the most awards, with three each, and Voorheesville and Queensbury will have the honor of being represented at the national awards ceremony in June.

Supporting Actress for her role as Celeste in “Godspell;” Vinnie Canale-Rouse of Hudson Falls High School took Best Supporting Actor for his role as Lumiere in “Disney’s Beauty and the Beast;” and Bethlehem High School won Best Student Orchestra for their production of “Wizard of Oz.”

“We are extremely proud that our talented student musicians have been recognized for their efforts,” said Jason Dashew, Bethlehem’s musical director. “They were an integral part of bringing the emotion of our stage production to life. In fact, each of the 150 students who contributed to “The Wizard of Oz” — either in the pit, onstage or backstage — delivered something extra special to our show and performed with a synergy that earned them five nominations in these first-ever regional theater awards.”

Voorheesville’s Clayton A. Boughton High School’s production of “Mary Poppins” won for Best Choreography, Best Ensemble/Chorus and Best Actress. Jaynie Parmenter who won Best Actress for her portrayal of Mary Poppins in the eponymous musical and will now be one of the first students to go on to represent the region at the national Jimmy Awards with Patrick Shannon of Queensbury High School, who won Best Actor for playing Valjean in his school’s production of “Les Miserables.”

The NHSMTA ceremony will be held at Manhattan’s Minskoff Theatre on Broadway, where “The Lion King” is currently running, on Monday, June 26.

For the ‘Burgh: A councilman and a musician save a summer concert series in Lansingburgh