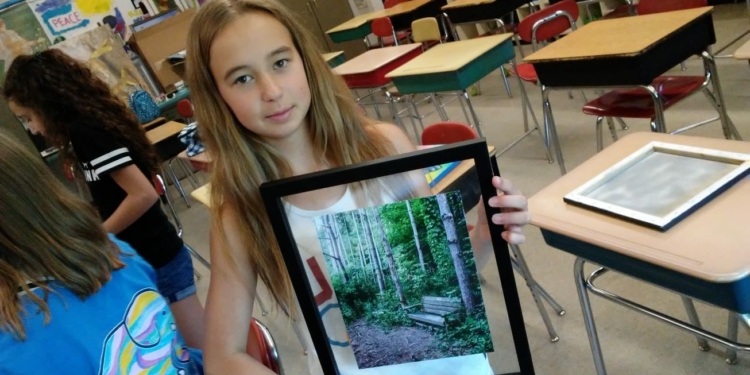 7th grader Paige Doherty has been cataloguing and framing artwork for the last two months to give other children her age the chance to get an education // Photos: W. Reilly

BETHLEHEM — The Bethlehem Central Middle School Helping Hands Club is holding its annual International Art Auction to send impoverished children to school in Uganda and Belize on Thursday, May 25, at 6:30 p.m. in the school library. This year, they have more art to sell than ever before.

BCMS Social Studies teacher Bill Reilly runs “The Global Coalition for Peace Education and Cultural Awareness”, an internet based project that connects schools and students around the world. Twelve years ago, one of the schools connected with the project was a student community school in a rainforest village in Belize that was run by the late Michael Casey, brother of Dan Casey from Perfect Blend in Delmar, and his wife Jillian.

“In 2005, he called me up,” said Reilly. “And he told me that he was trying to build a classroom down there. It was this little four-room school in the middle of the jungle and he was trying to add a room so that he could create an online high school for the kids, because after eighth grade there was no school.”

Casey told Reilly that it would cost about $2,500 American to build the new building.

“We had been exchanging art with schools around the world, and it was all children’s art,” Reilly said. “I was running out of room on my walls, so I said we’ll hold an auction and maybe we can raise a couple hundred dollars.”

Not knowing what would happen, they gathered the artwork, placed an ad in the paper and put fliers up around town. “We had nearly 100 people show up,” said Reilly. “And at the end of the night, we had $2,500.”

Reilly said that he let his students pass the bag of money around the classroom and told them, “We’re holding a whole school for a village in our hands.” He smiled. “And it was like this light going off, that, wow, we could make this much difference,”

The auction has become an annual event for Reilly and his students and, he said, has evolved over the years. Art is still sent from around the world, but is also contributed by students and other local artists.

One donated piece, by photographer Mark Andrews Small, has hung in the National Museum of Dance, said Reilly. And a large canvas painting of a zebra, he said, was painted by a street artist in Uganda. Local Bethlehem artists Jill Baboulis and Raina Briggs have donated work, and there will be antiques, coins and collectibles to bid on. More than ten countries will be represented.

“The art is from all around the world, all of the pieces are unique and spectacular,” said 7th-grader Eva Mane. “This is a wonderful way to make a difference in someone’s life.”

“We have been working for two months on the art auction,” said 6th-grader Asia Ferrera, “It’s beautiful art!”

“The whole auction is pretty much run by the kids,” said Reilly. “They have been in here for the last two months with me, prepping artwork, framing pieces and labeling pieces and cataloguing pieces. So it’s all run by these students to help educate some of the poorest kids in the world.”

Each year the proceeds go to Belize and Uganda via two local nonprofit organizations.

The Giving Circle in Saratoga does outreach work in Uganda and Reilly works closely with them to get much needed supplies to students there. “We actually buy the science equipment that’s going there,” said Reilly, who traveled to the country in February to train teachers to build a science classroom. He said that he returned with a list of things they need and that a group will go back to Uganda in July with the necessary items.

World’s Window, Inc., founded by Michael Casey shortly before he and his family tragically died in a plane crash in 2010, seeks to develop, support, and expand education initiatives and programs in areas of need throughout Belize. Chris Casey, another of Michael’s brothers, serves as executive director of the organization and Reilly is president. “There are also a lot of local community members on the board,” he said. “Specifically, we raise money to pay for tuition. We send about 40 kids to school every year in Belize who come from rural villages where there is no high school, so we pay for them to have room and board in a small city in Belize and pay for their high school tuition.” In recent years, he added, they’ve begun raising enough to send some of those kids on to junior college.

“Over the years, we have paid for the education of thousands of children and supplied their schools with much needed equipment, “ said 7th grader Paige Doherty, an artist who herself is donating a piece to this year’s auction. “This art auction will change the lives of children in Belize and Uganda.”

“Our goal is to take kids in two of the poorest countries in the world and send them to school so that they can also make the world a better place,” said Reilly.

“It starts with us to make a difference,” said 6th grader Luzelena Alvarez.

Reilly does the actual auctioning at the event, while Helping Hands students handle the artwork and money. “They even serve hors d’oeuvres and sparkling drinks to people as they come in,” he said. “We try to keep it a classy affair.” Students in the school’s musical program will even be on hand to provide entertainment during the half hour preview, from 6:30 to 7 p.m.

Each year, the auction raises $3,000 to $4,000, said Reilly. In addition to sending hundreds of kids to school in Belize, that money has built two schools and a well in Uganda, in what is considered to be one the poorest areas in the world. “In just five years, going from having no school, we have kids who are up to a 7th grade education and doing really well on their exams and receiving some of the highest scores in the region.”

This year, the school has received more art than ever before and the Helping Hands Club is hoping to break fundraising records. “We always hope to raise more,” said Reilly. “But this year we have spectacular art.”

“This art auction will send kids to school,” said 6th grader Gemma Lucarelli. “And the art in this auction is beautiful!”