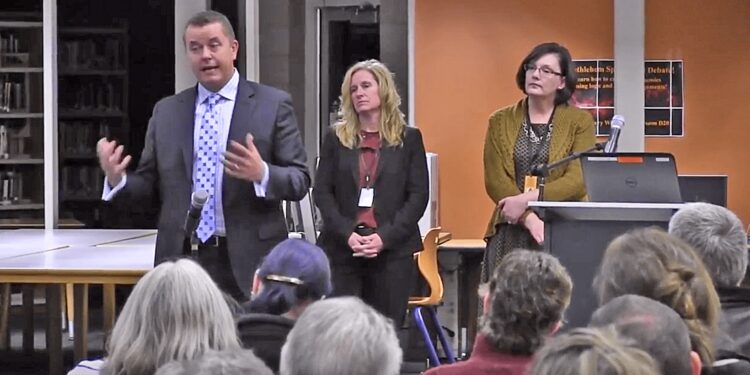 BETHLEHEM — At its next meeting on June 7, the Bethlehem Central Board of Education will review a possible inter-municipal lease/purchase agreement with the Albany County Sheriff’s Office, the current tenant at Clarksville Elementary School.

The school was closed by the district in 2011 due to declining enrollment and a $4 million budget gap, and its K-5 students were transferred to Eagle and Slingerlands elementary schools. The Sheriff’s Office has occupied the space since 2012 and has expressed interest in purchasing the property, according to district officials. Based on enrollment trends and projections compiled by the Capital District Regional Planning Commission, the school district said that it does not foresee a need to re-open the school.

“District administrators and the Sheriff’s Office have put together a tentative framework that would extend the Sheriff’s lease for three years, through 2020, and modify it to be a lease-purchase agreement, with a purchase price of $325,000,” said BCSD Superintendent Jody Monroe.

The Board of Education will go over the details of the tentative plan at its regular board meeting on Wednesday, June 7 at 7 p.m. in the Bethlehem Central High School Library Media Center (LMC).

“In March, the Bethlehem Central Board of Education held a community meeting to discuss a possible sale of Clarksville Elementary School to the Albany County Sheriff’s Office,” said Monroe. “At that meeting, the prevailing sentiment from those who live in the area was that while the school is greatly missed, the Sheriff’s Office has been a welcome addition to Clarksville.”

At a March 8 public meeting to discuss Clarksville’s future, Sheriff Craig Apple talked about his vision for the building, which would include turning more than half into a fully functioning police station and seeking grant funding to use the rest as a community and outreach center that could be used to host youth sports programs. He also expressed interest in bringing county services closer to the hill towns in the hopes that they will be more likely to access those services.

Others were concerned about things like potentially increased noise and changes to the property, and many were clearly still upset that the school had been closed at all, taking issue with the way the 2011 decision was handled by the Board. A host of complaints that Clarksville children have been subjected to hong-long bus rides in some cases resulted in the addition, in the 2017-18 school budget, of two new bus routes to Clarksville, but there has been no serious discussion of re-opening the building as a school in the foreseeable future.

“We have a vision,” Apple said. “But this is far from a done deal.”

Residents who have questions in advance of the June 7 meeting are encouraged to reach out to Superintendent Monroe by email at [email protected].​