‘Never Hang Up Your Gloves’ 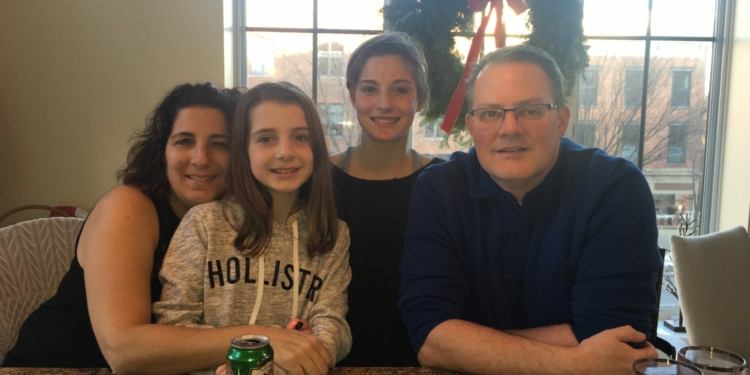 When Lauren Conti, an eighth grade student at Farnsworth Middle School in Guilderland, needed to choose a “passion project” for her English class last November, she saw an opportunity to help the family of a friend.

Students were told to identify something they were passionate about, “and then do it,” said Conti’s mother, Colleen Conti. Lauren, who had been watching the family of her friend and soccer mate Joanna Van Royen coping with her mother’s severe illness, decided she would find a project that could help alleviate some of the financial burden the illness has placed on the family.

“Jo and her family were on my mind since she’s on my soccer team and I see her all the time,” said Lauren Conti. “It makes me sad to hear about all the stuff that’s happening and I just thought this would be a good way to make something good happen and raise some money to help them.”

Christi Van Royen, a resident of Bethlehem, is married with two daughters — 13-year-old Joanna and an 11-year-old named Angie. She has been struggling with cancer for two years and this winter her condition took a turn for the worse. According to the Contis, treatment, which requires weekly trips to Sloan-Kettering in New York City, has become overwhelming for the family.

“She’s always thinking about them and how difficult it must be for them,” Colleen Conti said of her daughter. “Especially for the kids. This is happening to their mother and it’s a scary thing. So, it’s not just about the financial piece but the whole mental side of dealing with this illness.”

Conti said that Lauren was affected by the loss, three years ago, of another close family friend to pancreatic cancer. “She knows what can happen,” she said. “And I think it’s been on her mind since Christi was diagnosed. We’ve had several conversations about what we can do to help in a meaningful way.” The passion project, she said, provided the impetus to take action on a larger scale.

“The whole family really appreciates it,” Lauren Conti said of the Van Royens. It was Joanna who created the “Never Hang Up Your Gloves” design adorning the shirts that each runner will receive on the day of the run.

Lauren was inspired to organize a 5K fundraiser because her maternal grandmother, Sharon Boehlke, has ties to the local running scene. Conti, who runs track and field at school, has been helping host 5K “finish line road races” — many of which are fundraising events — since she was a small child. Even so, she said she was surprised at the amount of time and effort it took to organize the June 2 event.

According to Colleen Conti, it took months just to settle on a location for the event. “People don’t understand what goes on behind the scenes of a road race,” she said. Insurance, permits, fees and public safety costs are just some of the “hoops” through which organizers must jump, said Conti.

The run will begin at 6:15 p.m. on Friday, June 2, but participants can start showing up at Slingerlands Fire Department at 4:30 p.m. More than 150 runners were signed up by May 15, but registration will remain open right up until race time. The entry fee is $20 until race day, $25 on the day of the race. Donations will be gladly accepted and there will be raffles and other opportunities to show support at the event. Participants can register at www.finishright.com, as well as look up event details and/or donate online.

“[Christi] is a really good person and I just love her,” said Lauren Conti, who set a fundraising goal of $10,000, all of which will go directly to the family to help cover medical and travel expenses. After months of planning, Conti’s excited that race day is just around the corner and hopes the weather will be nice.

Whoever wins, said the Contis, “We are trusting that the ‘award’ for all participants will be to make this event a success.”

Changes made to Lockrow Blvd. project in Colonie