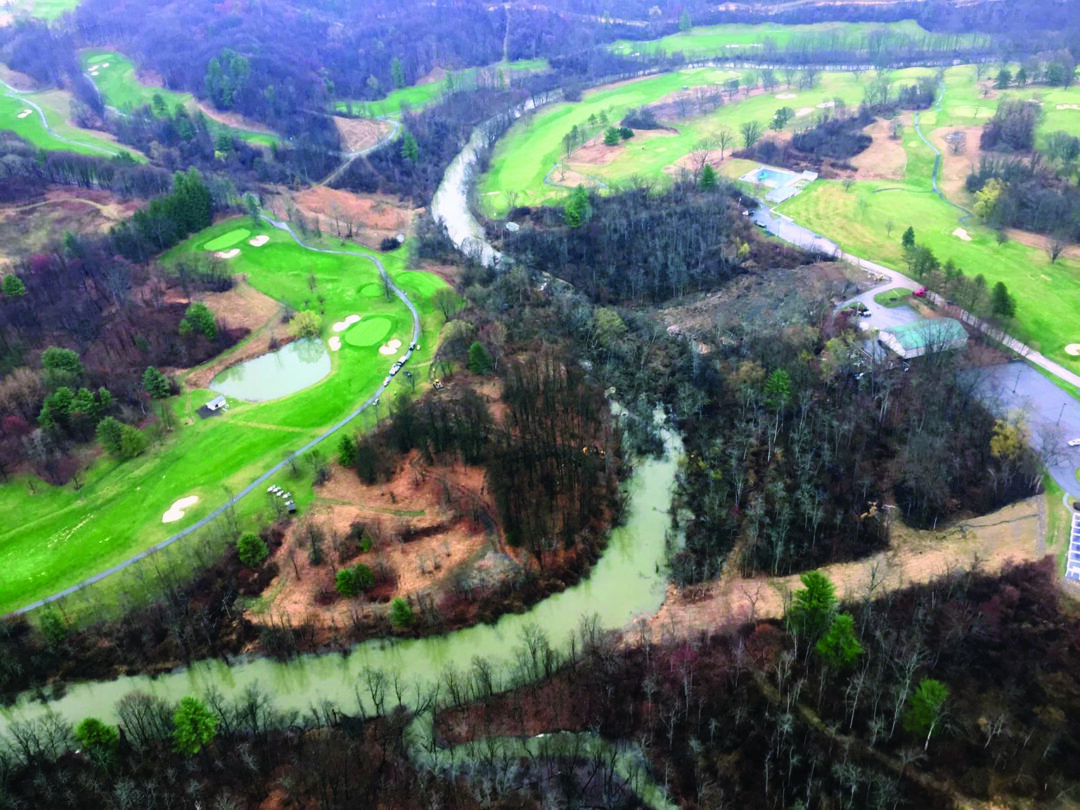 The Normanskill, as it appeared the day after the April 2015 landslide // File photo

BETHLEHEM — A local news story about the possible sale of Normanside Country Club in Delmar caused a stir among town residents on Wednesday, May 10.

Local NBC-affiliate WNYT NewsChannel 13’s story circulated on social media and caused a widespread impression that the town had plans to purchase and develop the property, according to Supervisor John Clarkson. This provoked a flurry of phone calls to town officials and brought residents to a Town Board meeting that evening.

At the outset of the meeting, Clarkson reassured residents. “Our plans are very much the opposite,” he said.

Clarkson told Spotlight News that two sentences in WNYT’s story — “Bethlehem wants to close on the club and get the land developed. They’ve called it ‘an expensive headache.’” — were “wildly inaccurate.”

“No one from the town ever said any such thing,” asserted Clarkson. “And no one ever talked to us. I can only assume that was a quote from someone else.”

The concern generated by the story prompted town officials to address the issue before the Town Board’s regular meeting that night. It wasn’t on the agenda, he said, because the town has never considered putting the development of Normanside on the agenda and had not thought it was an issue until that very afternoon. “That’s not something we ever wanted to see,” he said. “We want to see it continue as a golf course and, if not, we’d like to see it preserved as open space.”

David Hostig, director of operations at Normanside, also disputed WNYT’s story, which implied the club was considering selling the property to developers, calling it, “totally off base.” He said it was likely the only thing that he and the town have agreed upon in the last two years.

“For one,” he said, “that couldn’t happen. And, the town isn’t in the business of development anyway.”

A proposal to buy development rights from the country club could well have been a source of confusion, according to information shared by Town Attorney James Potter.

After recounting a two-year legal saga that began with illegal dumping of “clean fill” refuse onto a slope on the Normanside property, Potter said it was unlikely that the land would be desirable to developers in the short-term future due to outstanding debts and non-compliance with a state Department of Environmental Conservation order to remedy damage done when the fill eventually caused a landslide that blocked the Normanskill in April 2015.

Additionally, he said, it is highly unlikely that the town will be able to resolve litigation until Normanside complies with the DEC order.

According to Hostig, the town had acquired a permit by the time of the landslide, which was issued, he said, with the town’s full knowledge of the condition of the slope in question.

Potter countered that the engineer on the permit application had been hired by Normanside and was not a town employee, saying that the town did not have a full picture of the slope’s condition and should therefore not be held liable for landslide remediation costs.

Both parties said that Hurricane Joaquin, which hit in the fall of 2015, necessitated additional remediation efforts to ensure limited flooding. Hostig said that those additional efforts, undertaken by Normanside, should count in the club’s favor. He also said that, by and large, most requirements of the order have already been met.

Potter said that was possible and that testing may show that the channel is currently deep enough to satisfy water flow requirements but that it remains up to DEC.

“The town would like to be able to help the Normanside in any way that it can,” said Potter. “It is a community amenity. That has always been our position.”

To that end, while state law prohibits the town from giving money to the club outright, Potter said it would be possible to purchase development rights, which, he pointed out, would have two benefits — Normanside would receive financial assistance, which Potter suggested could help it comply with DEC, and it would guarantee preservation of those open spaces by placing a restrictive covenant on the property.

The town has extended that offer to Normanside’s legal representation on more than one occasion but, until the Board met on May 10, the country club was resistant to the idea.

“We did not feel that those conversations, initially, were much of a reality,” said Hostig. “But, since the statements, and tone that they took at the Town Board meeting, we were very quickly in communication with them and we’re very open to working with them on that type of partnership.”

Original offers, said Hostig, contained too many “caveats,” but the support of residents who showed up at the Board meeting has “helped to open up the lines of communication.”

“We were very happy to hear that,” said Potter. He said that he has already begun speaking with Normanside’s attorney about the “mechanics” of the deal and that a price would have to be negotiated. He declined to speculate as to what that price might be.

Both parties expressed a desire to ensure appropriate legal protections are in place.

“Our number one priority is to continue to operate as just we are now,” said Hostig. “If anything, to expand the services that we offer, within the same scope that we offer them.”

Delmar business owner Brendan McCann came to the meeting with his business partner and other local owners to express  their support for the continuation of Normanside as a country club, citing cooperative endeavors and a desire to “keep Delmar and its residents entertained in Delmar.”

Saying he was happy with what he heard from the Board that evening, McCann added, “I just hope that everything can get settled in the best interests of the community.”

“I came here to speak on behalf of the land,” said Bethlehem resident Judy Mayer. “But, now that I’ve heard that Mr. Clarkson and all of you are in support of this beautiful piece of land, I don’t have to say anything.”