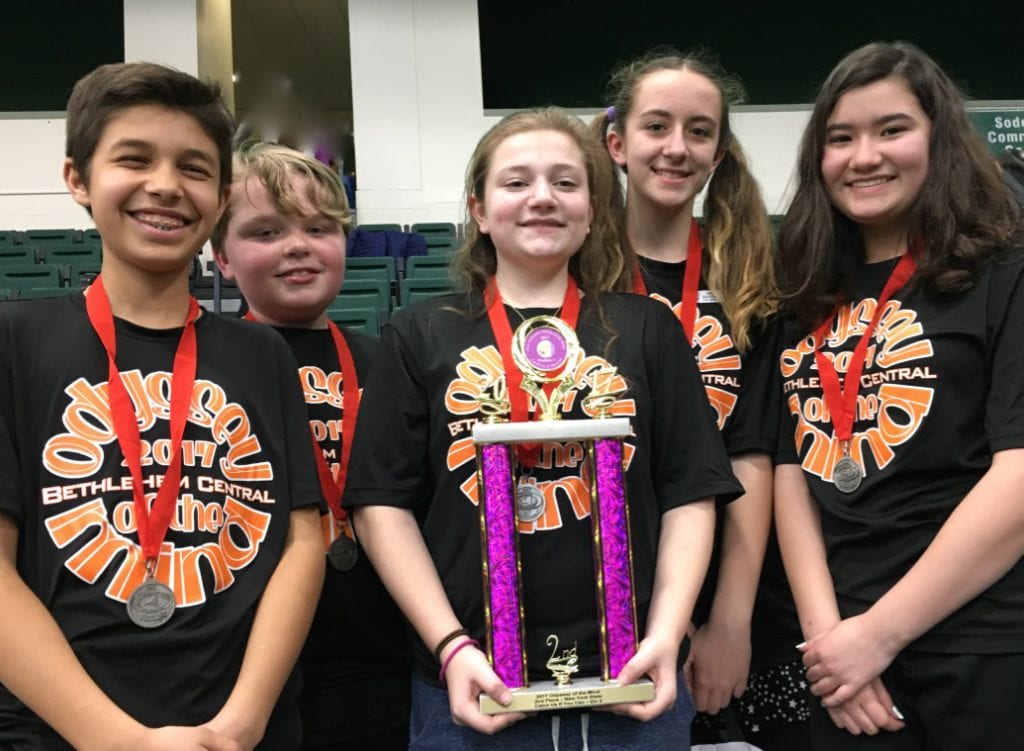 BETHLEHEM — Seven teams from Bethlehem Central School District competed in the Odyssey of the Mind  (OotM) Region Seven competition on Saturday, March 4 at Shenendehowa High School. Three of those teams — one from the high school, one from the middle school and one from Hamagrael Elementary — moved on to the New York State competition at Binghamton University on Saturday, April 8.

Now, after earning second place in their division at the state level, five students from Bethlehem Middle School will now go on to compete in the OotM World Finals at Michigan State University in May.

Team member Lily Beiter, who is in her fourth year competing, will be heading to World Finals for the second time. “I love Odyssey because you can create great friendships and it brings the creative side of you out,” she said.

Now an international competition, Odyssey of the Mind was founded in 1978 by C. Samuel Micklus and Theodore Gourley in 1978 at Glassboro State College — now Rowan University — in Glassboro, N.J. That first competition, known as “Olympics of the Mind,” involved teams from 28 New Jersey schools. Currently, thousands of teams from throughout the U.S. and from about 25 other countries participate in the program.

Administered by Creative Competitions, Inc., OotM is a creative problem-solving competition involving students from kindergarten through college. Teams of up to seven members apply their creativity to solve problems that range from building mechanical devices to presenting their own interpretation of literary classics. They then bring their solutions to competition at the local, state, and world level.

The team from the middle school solved a problem involving vehicular traffic and secret meetings, in which they were required to design a multi-level parking garage, act out a scene inside a car and develop a travel soundtrack. They earned second place at the statewide competition, scoring between Vestal Middle School and Germantown High School.

“As Herb Brooks once said, ‘Great moments are born from great opportunities,’ and that’s what my Odyssey team and I accomplished at State Finals,” said Tyler Novak, who is participating for the second year.

“Every team brought their very best to the regional competition,” said BC Odyssey Coordinator Betsy Gumustop.

The team from Bethlehem High School worked together to solve a performance-related problem involving a superhero tasked with saving creativity. The team created and presented a humorous performance that included a clumsy sidekick, a nemesis, a choreographed battle and a cliffhanger ending. Of 16 teams, BCHS placed fifth in their category.

Hamagral Elementary earned 14th place in their category for designing an original robot that learns by example.

“I think lots of kids have creative vision, and Odyssey of the Mind gives them an opportunity to try to bring those ideas to life,” said Leslie Perrin, parent coach of the winning middle school team, which also includes students Charles Blanchard, Claire Peretta and Fiona Castle. “These kids work together all school year, using any materials they can get their hands on, and experiment to see what they can make happen. The problems they solve are technically difficult and things don’t always work. The most valuable thing I think they gain is an understanding of how to work hard, keep a cool head in a crisis, and keep moving forward. At State Finals, the kids had issues with two of their three vehicles, but they kept on with their performance, got the vehicles to complete the required tasks, and finished their skit with big smiles and twenty seconds to spare. I was more proud of their perseverance and teamwork than anything else.”