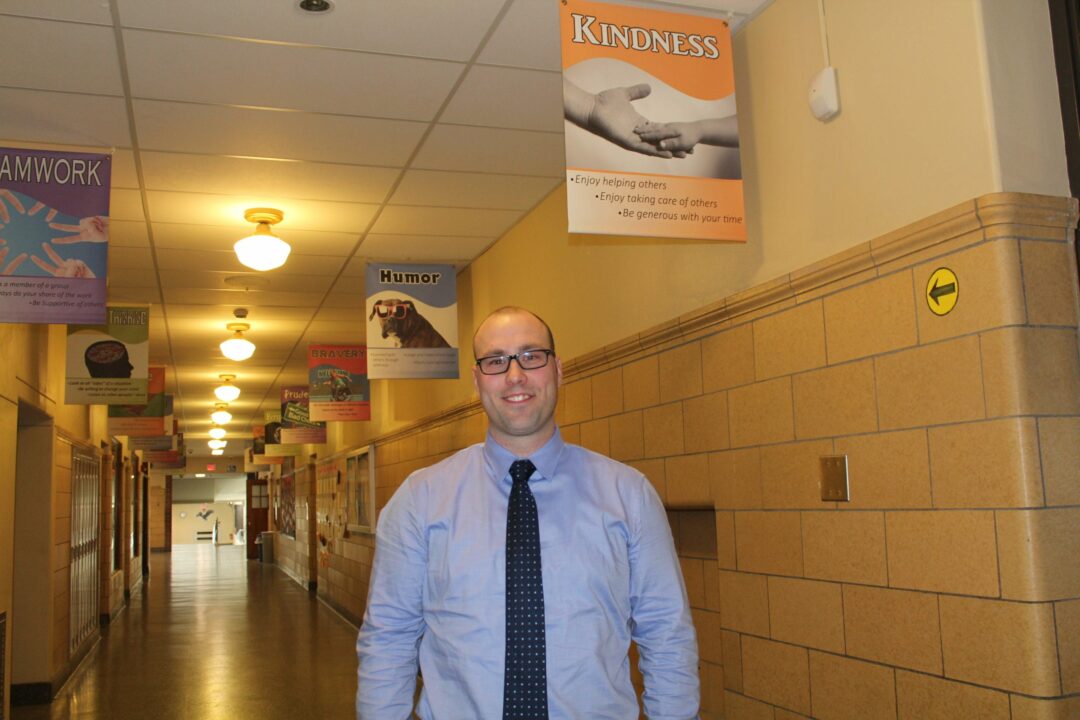 “I never meant to go into education,” said David Doemel, Jr., the interim principal at Bethlehem Central Middle School who will take over as the new principal at the high school at the beginning of next year. Initially, he said, he intended to be a journalist.

For those who have seen him in his natural habitat, however, it’s hard to imagine that Doemel could have ended up anywhere other than where he is or doing anything other than what he’s doing. For those of us who remember middle school as a social torture chamber overseen by a bored and demoralized faculty, it’s nothing short of revelatory to see how education has evolved at the hands of passionate educators like Doemel, who considers it his responsibility to help his students develop strong characters, in addition to the more common goals of gaining knowledge and learning life skills.

“Kids have so much pressure,” Doemel said, noting things like testing, college planning and social pressures. “I really feel like it’s our job to help them stay focused on the big picture: who they are as people and what they contribute to the community once they’re out in the world.”

Doemel, 37 years old, attended elementary school in North Colonie in the ‘80s and went to high school at Christian Brothers Academy (CBA), where Doemel Sr. is a guidance counselor and coach. By the time he graduated from St. Bonaventure University in 2001, he said he thought he would find a job in advertising. In the chaos following 9/11, however, he had a difficult time gaining entry into the field and began helping his father coach basketball at CBA to keep himself occupied and stay active.

That, he said, is where it all began.

Everyone in Doemel’s family is in education: his father; his mother, an art teacher at Holy Names; all four siblings, three sisters and a brother; and his wife, a teacher at Slingerlands Elementary School. It was a reason he gave for eschewing that particular career track earlier in life. “I wanted to not do what my parents did,” he said. But it was while coaching with his father that he found he had not only a love of working with kids, but an innate knack for it.

Doemel soon had the opportunity to fill an open position at the school, teaching English and Global Studies. “I fell right in,” he said. “And fell in love with it.” He soon realized that what he really liked was working with students outside of the classroom, “with the issues that they dealt with or helping them move on and advance to college.” So he enrolled in Sage Graduate School to earn his master’s degree in counseling. There, he fulfilled his internship working in the Counseling Center at BCHS, the school he will be running next year.

“When I left, I always said I would love to be back at Bethlehem,” he said. “I wasn’t even thinking in terms of administrative at that point.” After years spent working as a counselor, Doemel went back to school to get his administrative Educational Leadership Certification from the College of St. Rose. In 2013, he returned to BCHS — this time as an administrative dean working with freshmen and juniors.

“The counseling that I’ve done,” he said, “has helped me to meet kids at their level, find out what their interests are, what motivates them and what’s getting in the way. I feel like it just kind of comes naturally to me.”

“Anyone who has had the opportunity to work with Dave Doemel here in Bethlehem knows that he not only has a passion for education but for the community as a whole,” said BCSD Superintendent Jody Monroe. “What makes him stand out is that he demonstrates this passion in an easy, understated way making those around him — students, colleagues or parents — feel comfortable turning to him for input or advice. He is a natural leader.”​

It was Monroe who approached Doemel about filling in as interim principal of the middle school when the resignation of BCHS Principal Scott Landry necessitated administrative repositioning.

Going into the new position at the middle school, Doemel said that his biggest tasks were relationship-building and providing support to the school’s many existing programs. One program he clearly favors is the school’s Character Education program, conceived in 2009 by a Character Education Committee comprising both staff and students. The program rewards students who display positive character traits, such as kindness, cooperation, fairness or honesty and works to instill those traits by incorporating them into classroom and school-wide activities.

“We’ve done different activities throughout the year,” said Doemel, adding that he invited Jared Campbell, an award-winning songwriter whose message focuses on overcoming obstacles, anti-bullying, respect, leadership and having a positive outlook, to perform his tween-targeted program for the student body.

BCMS has identified 24 “character strengths” that are displayed on banners hanging in the school’s hallways. “Everyone has different strengths,” said Doemel. “We use those to highlight positive character strengths in kids that might have a harder time with other things. Their strength might be humor or it might be perspective or kindness. It gives teachers another way to positively connect with the students.”

Pointing to the wall behind him in his office, he drew attention to a pencil drawing taking shape on the wall. “This is something one of our is students working on,” he said. “He was really having trouble connecting with what he was doing in the classroom, but we found out that he was this amazing artist and so we tried to find a way to pull him back in and get him excited. Those are all historical figures.”

Doemel’s philosophy extends to those on his faculty, who he believes ought to be modeling the behavior they’re trying to instill in their students. He began his brief stint at the middle school by asking teachers to make a list of words that they felt described positive things about the school. He compiled those words into a visual “wordle” (basically a word cloud) that now hangs in each teacher’s room. “I told them when the days are tough and the kids aren’t listening, look up there. That’s what makes this place special.” Last month the teachers presented Doemel with a larger, framed wordle with words like ‘compassionate,’ ‘understanding’ and ‘friendly’ that they said were descriptive of him.

Going back to the high school should be an easier transition, Doemel said, primarily because he has already established a rapport with the faculty and staff there. He thinks the most exciting thing — and the biggest challenge — during his first year will be the anticipated roll-out of the district’s 1:1 program providing every student in grades 3 – 12 with their own Chromebook.

Recalling how he used to envy classmates who owned laptops, Doemel said, “For me to now look at my school and see every kid on a level playing field with technology is an amazing thing.” He also said that it was going to require “a lot of communication and collaboration.

“We’re going to be putting together a stakeholder group to provide feedback and assessment about the process throughout the year,” he said, speculating that lack of communication could potentially diminish or doom the nascent initiative.

Regarding the $32 million bond project approved by district voters in November, the cornerstone of which is a $7.8 million upgrade to the high school auditorium, Doemel said, “Those kids really deserve it!” Pointing out that the current auditorium was built in 1952, he described it as “dark and run-down” and said he hoped the new facilities would encourage more students to become involved with fine arts programming.

“Our community is so supportive,” he said when asked to identify the district’s greatest strength. “I think that whatever we need, whatever we’re asking for from parents — whether it’s support at home, whether it’s support with an initiative we’re doing within the school district — they always respond.” Praising BCSD faculty and staff, he said, “Having such talented people in the schools along with supportive people at home is really, I mean, that’s the key with education.”

At the high school, Doemel said he wants to continue to emphasize character education. “I want to continue that positive culture and community in the [high school] building. I mean, we really have all the rest: the academics; the kids that are willing to achieve at a high level; the work ethic; the educators; the parents. Now it’s about maintaining focus on what the real purpose of education is — both as a student and as a person.

“What I would tell the community and the parents,” Doemel said, “is that, to me, this is a dream job. I’m 100 percent invested in the community; I live here, my wife works here, my kids go to school here. I trust so many of the people within the district and so I’m going to give everything I have to the community and to the school to make it the best place possible for their students to get an education.”

HEALTH and FITNESS: That ‘relaxing’ glass of wine could be killing you