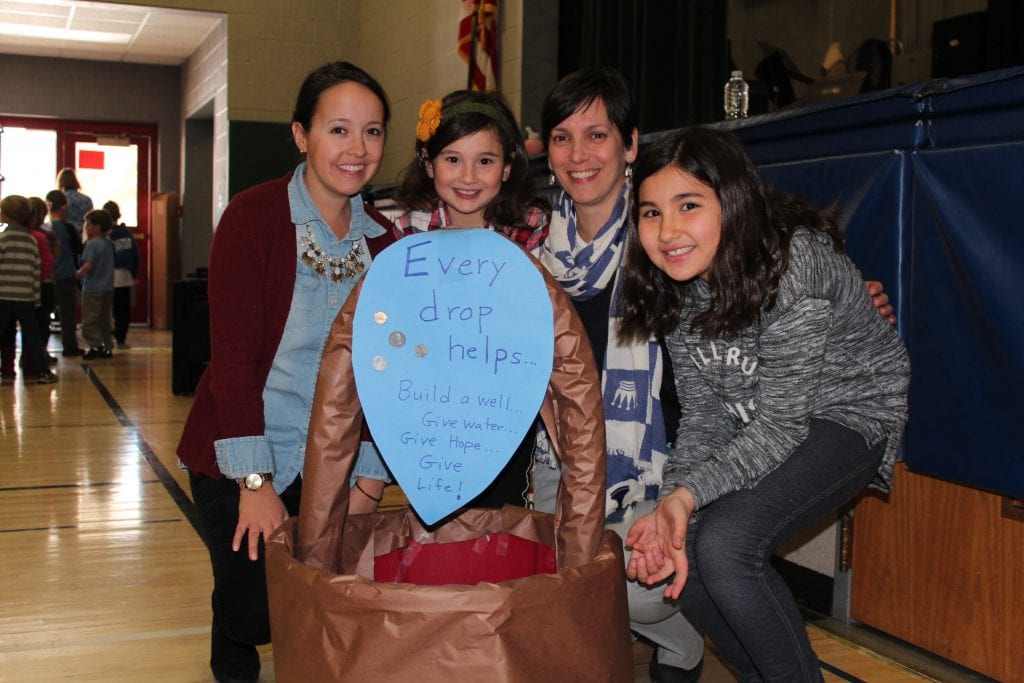 BETHLEHEM — Today, March 22, at Slingerlands Elementary School, students and staff kicked off a special global community outreach project to raise money to build a water well in Chad, Africa. The launch coincided with World Water Day, recognized annually on this day to bring attention to the hundreds of millions of people worldwide living without a safe water supply close to home.

The idea to raise funds to build the well was introduced by students, sisters Melike and Nihil Yegit, who, along with teachers Ms. Gough and Ms. Qualtere, helped put together a school-wide assembly where they described and demonstrated how children in some areas of the world often have to travel far to find clean water to drink. These children often miss school because they have to travel for hours each day to reach a clean source of drinking water, they said. (View photos from today’s assembly.)

The Yegits, Gough and Qualtere decorated a small “well” to be set up in the main hallway at Slingerlands Elementary School where the school community will collect spare change in an effort to raise $500 to support construction of the well.

“Several students come to school with great ideas of how to help people in need,” said Principal Heidi Bonacquist. “This year, we asked students to write proposals for their fundraising ideas. As a school effort, we chose the Yegit sisters’ proposal to help build a drinking well for children in Chad.

“We chose three proposals in all,” said Bonacquist. “Our next effort will involve helping support the needs of refugees and next fall we will lend support to the South End Children’s Cafe in Albany.”

Mrs. Bonacqust said the school will be working with the organization Embrace Relief on the water well effort. In addition to collecting spare change at the school, there is an online link for people to make donations to help raise funds to build the well for children in Chad, Africa.

“Although it costs $4,500 to build a well, our school’s goal is $500,” said Principal Bonacquist.  “Once we have reached this goal, Embrace Relief will send a certificate to the school recognizing the Slingerlands Water Well in Chad.”