Family and friends remember Jajuan Williams in their own way 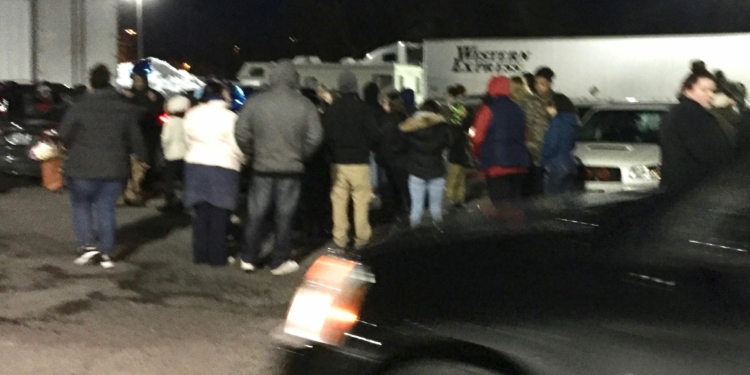 A makeshift memorial in the Walmart parking lot for Jajuan Williams, a Glenmont man killed in a Colonie car crash (Photo by Jim Franco/Spotlight News)

GLENMONT – While it wasn’t a typical memorial service, the pain and grief were just as profound as if it were under a church steeple.

About 100 friends and family gathered in the back of the Walmart parking lot on Friday, March 17, to mourn the loss of Jujuan Williams, the 21-year-old who was killed in a one-car accident on Central Avenue in Colonie the night before.

Williams, who grew up in Albany but was living in Glenmont, was into cars, a gearhead, affectionately speaking. He would work on his own and help his friends work on their own late model foreign cars like a Honda or Subaru. When they weren’t driving around, they would hang out in one of the few places designed to fit a couple dozen automobiles comfortably, parking lots, to talk about upgrades and polish their rides.

So, that’s where his friends went a day after one of their own died

while driving his 2000 Acura. Police say speed was a contributing factor, and there are grumblings the crash happened during a drag race. Neither those at the makeshift service, nor the police are not commenting on that at this time.

Williams’s family also came to the parking lot, bringing balloons and flowers and sharing hugs and tears. Many were too stunned to talk, the death of a loved one still too fresh.

Members of the two groups did mix on the fringes, with a handshake or a hug, but the separation between the two was distinct. Bethlehem police made laps around the lot, looking on with suspicion, but allowed the group(s) to mourn as they saw fit.

“He was a beautiful kid. I feel like I lost my son. My son is the only family I have, and Jajuan was my son’s best friend. They were

inseparable,” said Sergyo Lopez. “Accidents are always a surprise, but we never expected anything like that would happen. Maybe he made a bad choice. I’m not sure if he always drove like that, but yesterday … he did.”

Williams graduated from Bishop Maginn in 2013 and was working as a sales rep at Lia Nissan of Colonie, located not far from where the fatal accident occurred.

At Maginn he was a standout center on the football team’s offense, and played end on the other side of the ball. He was captain his senior year, when he averaged 4.4 tackles a game in the five games he played according to MaxPreps.

On its Facebook page, the school said Williams “was that student who was known and loved by all. He had an infectious smile that could light up a room, He was always there to help. To love and be loved.”

Once, according to the post, Williams once took a week’s paycheck and bought 500 cans of food to donate to a school-sponsored drive to

“It’s unreal right now. It’s hard to believe he is gone at such a young age. He didn’t get a chance to live his life. He was a great kid and he would have been a real great man,” said his cousin Louis Stella. “He always had a smile on his face. He was always positive. I never would have imagined this would have happened. It’s tough. I’m still trying to wrap my head around it. It’s hard right now and I’m pretty sure it’s going to be hard for a long time.”

He also said Williams was big into cars and “it’s sad that speeding was the reason for him not being here right now.”

The cars are easy to spot. Most are older and foreign, and are certainly louder than a Honda or Subaru or Mitsubishi off the lot. They have shiny paint jobs, fancy rims, low profile tires and spoilers on the trunks to help help air flow, increase speed and look cool.

You can bet the stereo is amped up, the windows are tinted and sometimes the head and tail lights look a bit wilder than they would with a factory bulb.

What’s under the hood varies – most often with how much money the owner has — but almost all go faster than the four-banger sedan originally marketed as a fuel efficient family transport.

The cars were sensationalized in the “Fast and the Furious,” an action movie series about illegal street racing and the lifestyle that goes along with it. The first “furious” movie came out in 2001 and the latest, “The Fate of the Furious,” is due in April.

In an April 10, 2015, statement on the social media site Twitter, Williams, with colorful profanity not uncommon for a 19-year-old, said he was on his way to watch “Furious 7.” In a 2014 Tweet he said: “I can honestly watch Fast and Furious over and over again.”

“He was into cars like all of us. Into the car clubs and always talking about what he was going to do to his car,” said an attendee at the Walmart Parking lot memorial as he walked around his red two-door

Acura, not unlike the one Williams was driving when he died.

The attraction, he said, while preferring to remain anonymous, is “the speed” and just “knowing your car is faster than someone else’s. It’s a way of life, really.”

He said he hasn’t invested “too much money” into the car he was driving on that night, but the 1995 Honda he is working on is putting a dent in his wallet, albeit a little at a time.

Another attendee who preferred to remain anonymous was polishing the chrome rims on his late model Chevy pickup, a winter vehicle. He said young guys prefer the older cars because they are easy to find and relatively inexpensive at the onset. You can always, he said, spend a little at a time to make it look cooler and go faster.

“I grew up with it. My brothers’ friends were into cars and they were always going to the car meets and they brought me once in a while. As soon as I got my first Honda, it was all over,” he said while sporting a hoody that said “Race it. Break it. Fix it. Repeat.”

As to Williams death, he said there is a “time and place for everything.”

“Just like our other friend we lost last summer, nobody will ever know what honestly happened that night,” he said. “You try to do it in the right places and sometimes people make mistakes and bad choices.”

He was referring to Thomas Brown, a 20-year-old Guilderland resident who died in a crash while drag racing on Bender Lane in November 2016.

“As long as I’m behind the wheel, and if I know that it’s speed that killed me I know I died smiling,” he added.

“He was a great guy. Always willing to help. To lend a hand. He was helping me with my Honda,” he said. “You have to be careful and you have to be respectful, you have to be aware of what’s going on around you. I don’t know what happened that night, and I’m not sure if we will

ever know, but I know he is going to be missed.”

If the gearheads favorite pastime is driving cars, their second is working on them and a close third is hanging with other gearheads and talking about them.

“The car community is its own culture,” said an attendee who would only give his first name, Chris. “There are people who are get into antiques there are people who like cars and he [Williams] liked cars. He liked driving them and playing with them and fixing them.

“Jajuan was a great guy. A great people person with the biggest heart in the world. The way he died is terrible, but from what I know, at least he died doing what he loved.”