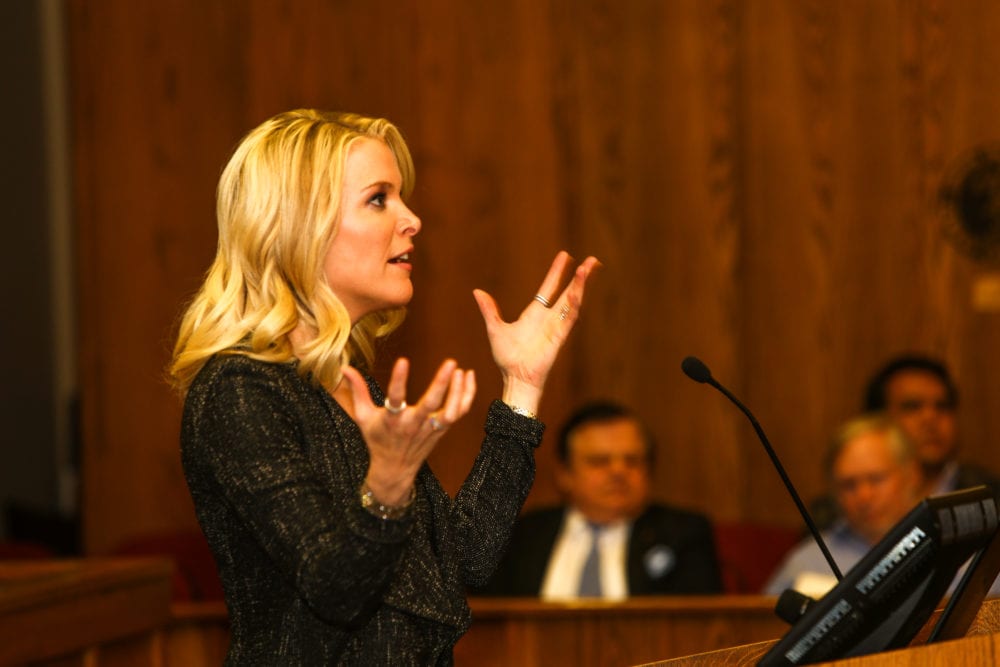 ALBANY — NBC News Anchor Megyn Kelly — a Bethlehem graduate, an Albany Law School alumna, a successful lawyer and national broadcast journalist, and the author of a new book — returned home on Thursday, March 9, to speak to students and staff at Albany Law School, an institution she was quick to credit for much of her success.

Standing on the floor of the Dean Alexander Moot Courtroom, where she reportedly earned a reputation as a formidable opponent in the early ’90s, Kelly said she insisted that the visit be added to the end of her official book-signing tour to promote “Settle for More,” which was released last November.

“If I hadn’t come here,” she said of her time as a law student at Albany Law, “there is no way I would have had the professional success that I have had. Everything I’ve accomplished both as a lawyer and in my 12 years as a journalist started right here. And that is the truth.”

The address was a semi-private affair: only current students and those who have been accepted to the program were permitted to attend, along with faculty and media. Those in attendance had the chance to ask questions of Kelly after she read an excerpt from her book, an autobiography, copies of which she signed in a public book-signing event in the school’s gymnasium immediately following the discussion.

A background in law, said Kelly, has opened doors and prepared her for many of the opportunities and challenges she has encountered over the course of her career. The ability to distill an argument; a predilection for over-preparing; an ability to separate emotions from intellect; the courage to press important issues; and the capacity for humility are all things that she said she learned or honed during those three years in law school.

“It’s such a different world,” she said of journalism.

Kelly told the story of how she met a freelance journalist at a guitar class she was taking while on a track to become partner at the Jones Day law firm in Chicago who, after a cup of coffee, agreed to help her put together a “resume

tape.” Her ability to quickly distill information and a penchant for over-prepping that led her to read “all the newspapers” impressed a talented cameraman to whom she was introduced at a bar. He agreed to shoot the tape for her.

“I did a bunch of cold-calling,” she said. “And then, one poor S-O-B at the ABC affiliate in Washington D.C. had mercy on me and let me drop off the tape in person. I knew if I could get in front of him, the job was mine.” Kelly pointed out that skills she utilized to secure her first job in journalism — the ability to impart information succinctly, authoritatively and, ultimately, persuasively — were all things she learned in law school.

In 2003, Kelly moved to Washington, D.C., where she worked for ABC affiliate WJLA-TV as a general assignment reporter. There, she covered the confirmation hearings for U.S. Supreme Court Justice Samuel A. Alito, Jr. and Chief Justice John G. Roberts; the retirement of Justice Sandra Day O’Connor; the death of Chief Justice William Rehnquist; and the 2004 presidential election. In 2004, she applied for a job at Fox News Channel.

In response to a question about the first Republican debate of the last election cycle, on Aug. 6, 2015, Kelly said that one of the ways in which she prepared was to ask her research assistant for information on the debaters — at the time, all men.

“I had binders full of men,” she told an amused audience. She used the information in those binders to craft “the toughest, most incisive questions I could.”

“When I went through the Trump binder,” said Kelly, “it was very clear to me that one of his main Achilles heels was going to be his treatment of women. You did not have to be a rocket scientist to see this theme emerge.”

Kelly’s first question to Trump was regarding his disparagement of women on Twitter, noting that he had characterized those he did not like as “fat pigs,” “dogs,” “slobs,” and more. Retribution from Trump and his followers, through social media and other means, was swift and led Kelly to fear for her safety at times. “It led a to a year of hell in my personal life and my professional life and it was very dark and it was very threatening,” said Kelly, who had three young children. “I was scared for my safety and that of my family.”

“People only remember that first question I asked of Trump,” she said. “However, if you go back and watch that debate — you know, in your spare time — we were brutal on all those guys on that opening night. … My question for Ben Carson was basically like, ‘Why are you such an idiot?’” Unlike Trump, she said, Carson took the criticism “like a man.”

Declining to identify as a feminist, she spoke at one point on the need for more women in positions of power. Without referring to ex-Fox News Chairman Roger Ailes — who resigned over the summer after accusations of sexual harassment by Kelly and other female employees — by name, Kelly suggested that having women advocates in positions of power would have made it easier for victims of harassment to come forward about their experiences. She said that she hopes women will feel comfortable coming to her in her new role at NBC News.

Characterizing cable news as “very political,” she ultimately claimed, “That’s just not me.” At NBC, she said that she hopes to launch a program “more consistent with who I am.”

“Obviously, I can do it,” she said of intensely political reporting. “It’s worked out pretty well for me.