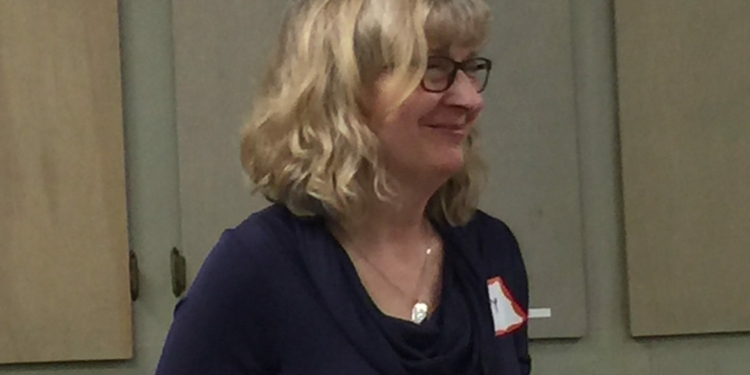 “I’m one of those people on the Four Corners in Delmar,” said Trudy Quaif, founding member of Bethlehem Neighbors for Peace (BNP) and recent recipient of the Capital District Women Against War’s (WAW) 2016 Woman of Peace award. “I’ve been out there for almost 15 years now, standing out on the corner every Monday night from five to six.”

Quaif accepted her award on the evening of Wednesday, Feb. 8, during WAW’s annual gathering at Good Shepherd Lutheran Church in Loudonville. As well as a recap of the previous year’s activities, the event features a keynote speaker — this year, Phyllis Bennis, author of Understanding ISIS & the New Global War on Terror: A Primer — and the presentation of the Woman of Peace award.

“It was a very easy choice with Trudy,” said Priscilla Fairbank, a member of the WAW Steering Committee, which is responsible for selecting the award recipient every year. “She was the perfect candidate.”

Fairbank said that Quaif’s consistent presence at the weekly peace vigils (she always brings extra signs) is one of the reasons that she was selected for the honor and cited her work with BNP, where she keeps the website updated, sends out emails, organizes monthly educational events and makes sure the peace community remains involved and informed. She also created and hosts the series of Peace Now video interviews with peace and justice activists, viewable on public access television.

Quaif began holding the weekly vigils at Four Corners in January of 2003. “It was when the US attacked Iraq and then Afghanistan,” she said. “I didn’t think it was the right thing to do, right from the very beginning.” Bethlehem Neighbors for Peace, which now boasts a membership of more than 700 members, was initially formed by Quaif and a group of likeminded community members.

“We wanted to make the rest of the community aware that this war was going on and it was not a good idea,” said Quaif. “It was going to cost our country a lot of money. As it turns out, it’s cost our country $4 trillion, which could have been spent on a lot of other things: education, infrastructure, jobs. It’s one of the reasons we are where we are right now, because our country has been at war for 14-plus years.

According to a 2013 report from Harvard’s John F. Kennedy School of Government, the wars fought in Iraq and Afghanistan, taken together, represent the most expensive wars in U.S. history — with a potential price tag between $4 and $6 trillion. That total includes long-term medical care and disability compensation for service members, veterans and families, military replenishment and social and economic costs. Most of the debt that has been incurred during the course of the conflicts has yet to be paid. According to National Priorities Project, American taxpayers are paying $117,035 every hour for the war in Iraq and $4 million every hour for the war in Afghanistan.

“One of the most significant challenges to future U.S. national security policy will not originate from any external threat,” states the Harvard report. “Rather it is simply coping with the legacy of the conflicts we have already fought in Iraq and Afghanistan.”

Quaif worries that the new federal administration will make deep and detrimental cuts to national programs to pay off debts, while appropriating more money for international military conflicts. “His Secretary of War is asking for more military to go back into Afghanistan again,” she said.

She also dislikes his actions regarding undocumented immigrants and refugees, many of which, she said, have been created by American-waged wars.

Even so, the message she conveyed as she accepted her award was one of hope.

“She had this series of great quotes about hope,” said Fairbank. “That was her message and that’s her perspective. A friend said that’s how she keeps everything going: it’s not a question of ‘shall we keep going,’ but ‘what’s next?’”

“I gave a little talk about hope in the Trump years,” said Quaif. “I talked about how we have to keep going even if things don’t look very good for our country right now and it looks like we’re heading towards fascism or authoritarian rule. We have to keep working on our agenda of waging peace. And hope for the best.”

While BNP tends to campaign primarily on issues associated with effects of war, the organization occasionally branches out and lends support to movements such as Black Lives Matter and opposition to pipelines and hydro-fracking of fossil fuels. A couple weeks ago, BNP staged a protest at Four Corners in support of Muslims and immigrants that Quaif said are “under attack.” The event was attended by approximately 75 people.

More than 100 people showed up to the annual gathering of WAW, according to Fairbank. “We had a large turn out, I think,” she said, “because people are feeling the need to come together and support each other, and activist groups are feeling that this is a time we really have to put lots of effort out.”

“It’s always good to get new and young people involved,” said Quaif, crediting the new administration for mobilizing more youth in recent weeks. Anyone who wants to be on the BNP mailing list, she said, can sign up at their website at www.bethlehemforpeace.org. She can also be found to chat on any given Monday evening during her weekly vigil or at one of the organization’s monthly meetings at Bethlehem Public Library.

Asked how BNP is going to respond to the new White House, Quaif said, “We’re going to keep doing what we’ve always done. We’re out there protesting war.”