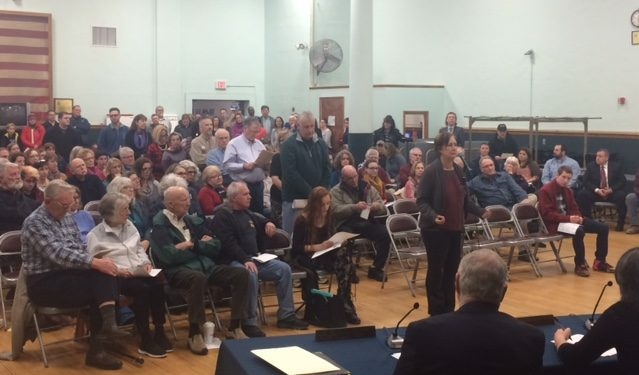 It was standing room only at the Bethlehem Town Board meeting last night, Feb. 8, as members considered a proposed resolution “affirming Bethlehem’s practices with regard to citizenship, immigration and protecting against threats or violence targeting national origin, race, religion, or citizenship.”

Fifty-eight residents spoke for or against the resolution, which, stopping short of designating the town as a “sanctuary community,” essentially reaffirms practices already in place that align with the same ideals regarding town and law enforcement interaction with unauthorized immigrants, specifically that:

“This is about what the town will do going forward and what we’re going to say about it.” said Town Supervisor John Clarkson, noting that the town already follows the unofficial “sanctuary community” policies of not using resources to prosecute federal immigration law unless mandated to do so and ensuring access to municipal services for undocumented immigrants. “We are setting policy.”

Forty-one residents, seventy percent of the speakers, spoke in favor of the resolution, invoking human decency — particularly concerning refugees from violent and war-torn countries — and expressing concern that causing undocumented immigrants to fear seeking police assistance would make the community less safe. Those speaking against the resolution expressed reverence for rule of law — in this instance, the executive order passed by the current federal administration — and fear of a perceived criminal element introduced by undocumented immigrants. A few residents expressed concern about whether the federal government might cut off funding to the town, a possibility board members seemed to think unlikely.

“This does not change any current standing policies or procedures,” Bethlehem Police Commander Adam Hornick said of the resolution. “To our experience, crime knows no boundaries. And that means boundaries of ethnicity, race, socioeconomic status or any other defining characteristics of individuals. It is our job to maintain the law and treat everybody equally. That is something that the men and women in our department do on a daily basis.”

“It’s an important time to make a stand,” said board member Julie Sasso, noting that her position on the issue had evolved. “We need to say publicly that this is a safe place for people.”

“We respect everyone’s opinions and we certainly respect the law,” agreed Clarkson. “But to me, making this statement now is incredibly important. These are challenging times.”

After some debate about the meaning of the word “sanctuary” in the context of recent federal actions, an amendment removing the sole instance of the word passed unanimously before the board voted 4-1 to approve the resolution. New board member Giles Wagoner was the dissenting vote, after expressing doubts about the larger implications of the label “sanctuary” and noting that it would change nothing procedurally. He declined further comment following the meeting.