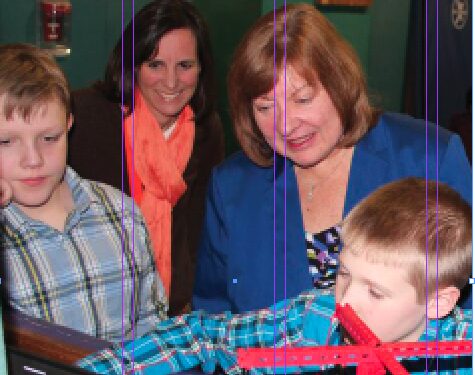 Bethlehem Central School Superintendent Jody Monroe cited Elsmere Elementary’s robotics program as one of many accolades in her State of our Schools address. Spotlightnews file photo)

BETHLEHEM — During the Feb. 1 Board of Education meeting, Bethlehem Central School District Superintendent Jody Monroe delivered the annual State of the Schools address, during which she highlighted district priorities, initiatives, successes, and other considerations. She also set the stage for the upcoming 2017-18 budget process, which begins Feb. 15.

Monroe began by pointing out that Bethlehem’s schools are ranked first in the Capital District, sixth in upstate New York, 53rd in the entire state and 223rd in the nation. “While we appreciate these rankings and recognize that they are part of what elevates the community’s reputation,” she said, “they do not tell the whole story. So let me try to highlight some of the hard work of our faculty, our staff and students in helping us to reach these heights.”

The superintendent gave a brief overview of the district’s Science, Technology, Engineering and Math (STEM) initiatives, which were broadened this year to include the arts (STEAM). She cited the after-school robotics program, the new “makerspace” package won by a Hamagrael teacher, K-12 computer coding initiatives, the push to obtain Chromebooks for every student in grades 3-12 and the high school teacher who earned an opportunity to work on a research project with NASA and share what she learns with faculty and students.

In other accolades: every Bethlehem sports team competing in the fall was named a Scholar-Athlete team by the New York State Public High School Athletic Association; the 2016 National History Bowl team placed third in the nation; and Bethlehem won the 2016 NYS Masterminds competition, placed first in a state stock market challenge and produced six National Merit Semifinalists. Of the 402 current seniors, 348 have cumulative grade point averages of a B or higher and Advanced Placement exams have netted Bethlehem students more than 4,000 applicable accredited college hours — to the tune of nearly $1.4 million in college tuition savings.

Turning to talk of district finance, Monroe pointed out that per pupil costs in Bethlehem are almost $6,900 less than in similar districts and approximately $3,200 less than the state average. According to data provided by the New York State United Teachers union (NYSUT), the cost to educate students in Bethlehem has grown at a slower rate than other districts around the state.

“The next several meetings we have will focus on the budget,” said Monroe. BCSD Chief Financial Officer Judy Kehoe will give the initial budget presentation during the Feb. 15 Board of Education meeting with subsequent meetings focusing on the various areas that the budget covers. The final budget hearing will take place on May 3 and residents will vote on Tuesday, May 16.

On the same night, residents will also vote to fill three open seats on the Board of Education. While two sitting board members—President Matt Downing and Albany County Legislator Joanne Cunningham—have indicated that they will not run for re-election, Christine Beck will campaign to retain her seat.

SPOTTED: The Eagles outplay the Dutchmen at home

EDITORIAL: It’s up to all of us