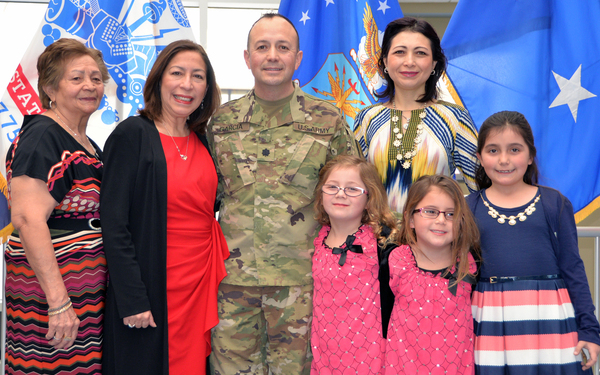 LATHAM – Luis Garcia, of Glenmont, was promoted to the rank of lieutenant colonel in the New York Army National Guard during ceremony at the guard’s headquarters on Friday, Feb. 3.

Garcia, a full-time, National Guard officer, enlisted in 1987 and was trained as a medic. He received his commission through the Reserve Officer Training Corps program in 1995 as a Medical Service Corps Officer.

In 2009 Garcia joined the New York Army National Guard’s 1st Battalion 69th Infantry as the battalion physician’s assistant. He accepted a full-time position as the physician’s assistant for the 24th Civil Support Team – a unit trained to assist civilian first responders by identifying the presence of chemical, biological, or radiological materials—at Fort Hamilton, Brooklyn in 2011.

Since 2015 he has served as deputy state surgeon for the New York Army National Guard, working from an office at the Watervliet Arsenal.

He is currently enrolled in the Army’s flight surgeon school program.

Prior to becoming a full-time Army National Guard officer, he worked as clinical coordinator for the Weill Cornell Graduate School of Medical Sciences at Cornell University. While at Cornell, his duties included teaching various areas of medicine to include emergency medicine, fundamentals of primary care, principles of physical examination and clinical medicine.

He and his wife Nelly live in Glenmont with three daughters, Julia and twins Sophia and Vienna.