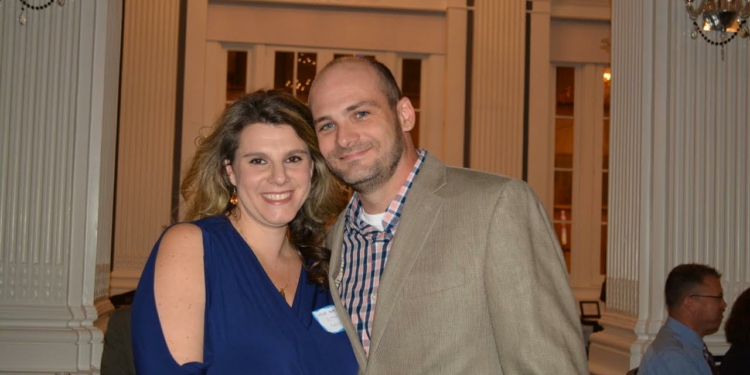 Scott McIntyre, founder of Athletic Haven, with his fiancé Chana, at the organization's "What Moves You” dinner.

LATHAM— When Colonie resident Scott McIntyre lost his 6-year-old son Tyler in 2012, he knew that he couldn’t spend the rest of his life working in a cubicle.

Now, just a few years later, McIntyre is on his way to doing just that. His new athletic nonprofit, called Athletic Haven, focuses on providing equal, low to no cost opportunities to would-be athletes in the Capital District. McIntyre said that, in a climate where high schools sports are becoming more and more competitive, as are travel teams, some young athletes are excluded before they even have a chance to train properly. He said that some families who have either single parents, or multiple children all playing sports could also struggle with the huge financial and personal commitment that comes with getting kids playing on both school and travel teams.

“What we’re trying to do is factor in the little kids that can’t afford to keep up with the exorbitant costs associated with travel sports,” he said. Athletic Haven will also focus on providing sports opportunities to kids who might not have access to competitive coaching in their communities. Conversely, he said, some kids might have been coached their entire lives with the idea that score doesn’t matter and that everyone deserves a trophy, and when the time comes to join middle and high school sports, they’re underprepared and become discouraged upon being cut from the team.

“So, we’re trying to be an outlet for all these kids, so that no kids get left behind,” McIntyre said.

McIntyre currently coaches all three high school sports seasons, and spends the summer months working at camps, clinics, and doing some individual coaching. However, as of recently, he has been dedicating his time to gathering volunteers for Athletic Haven, and creating a game plan. After working on a business plan, a website, bylaws, and getting non-profit status, the organization launched in June. McIntyre right now has a team of about 10 volunteers working with him, with a core group of around five people.

Athletes will not be cut from Athletic Haven due to lack of skill. During the tryout process, according to McIntyre, interviews will be conducted with the prospective athletes and their family members to try to gauge what the player can bring to the program, and what they’re hoping to receive back. To compensate for the low cost of joining Athletic Haven, each season, an athlete will have to secure a personal sponsor and he or she will be responsible from securing no more than $100 from that sponsor. After the season is over, all the money from the sponsors will go to a charity the team selects in the name of each player.

“We’re really investing back in the kids,” McIntyre said. “We just want to be overall a really enriching experience and make sure that every kid has the opportunity if they want it.”

Another financial aspect of the program is the Tyler Scott McIntyre Fund (TSM Fund), named after McIntyre’s son. Each year, a player will be awarded a scholarship from that fund. McIntyre said that the program coaches will be looking for qualities that Tyler demonstrated, including resilience, kindness, and a willingness to help, in selecting a candidate. McIntyre credits his son with giving him the inspiration to start the program, and said that, given any opportunity to help, Tyler would do it.

Athletic Haven’s tryouts for its first travel team begin on Nov. 28. McIntyre, who admitted that getting word out about Athletic Haven has been the largest hurdle he has had to overcome, explained that a year from now, he would like to see a few teams have successes in their seasons, but he’s intentionally taking the time to make sure he has people involved in the organization who believe in his goal of including all would-be athletes, and providing everyone with life lessons that extend far beyond learning how to dribble a basketball.

“We want to make them better players, and we want to make them better people,” he said. “To answer your question, a year from now what do we look like? I’m okay with it if we look like this. This needs to be done the right way. The way that is going work for me and make me feel good and, quite frankly, a way that’s going to make my son proud. And that’s really what it’s about.”