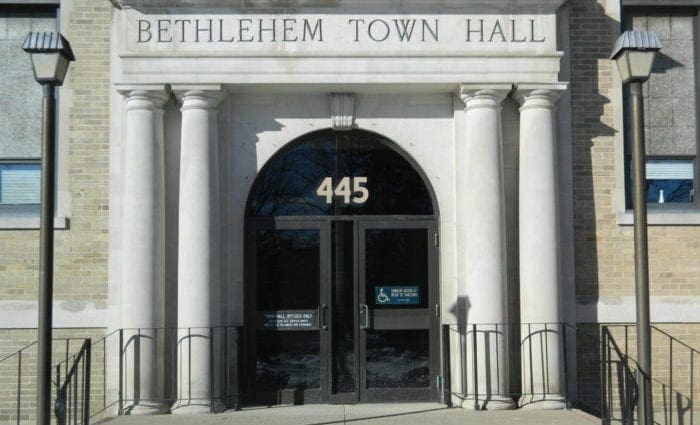 BETHLEHEM — On Wednesday, June 22, the Bethlehem Town Board accepted a “Master Site Plan” that was submitted for the parcel of land on River Road between Maple Avenue and the NYS Thruway Exit 22 in Selkirk. The plan, which will still need to be approved following a public hearing on July 27, outlines a development project consisting of three buildings with individual parking lots and driveways that will provide space for storage, offices and/or counter service, and research and development projects called the Gateway Commerce Center.

The proposed project, according Bethlehem’s Director of Economic Development and Planning Robert Leslie, is consistent with the town’s Comprehensive Plan, as well as waterfront revitalization initiatives. “The waterfront revitalization plan did recognize this area as having development potential based on its location next to the Thruway and Exit 22,” he said. “That’s the attraction of Rosenblum to that site, that it has easy, direct access to Exit 22.”

Rosenblum Development Companies, the project applicant, owns and manages properties around the Capital Region and just recently significantly increased its property portfolio with the acquisition of approximately 650,000 square feet in the Wolf Road area of Colonie. The Gateway Commerce Center project is consistent with diversification strategies that the company is pursuing—a mix of ground-up building, adaptive reuse and strategic acquisition, according the Rosenblum CFO Jeff Mirel.

Development projects in the Town of Bethlehem don’t typically require approval by the town board. According to Leslie, the location of this particular project—within what is called a Mixed Economic Development (MED) zoning district—necessitated the additional level of town oversight.

“These are lands that are zoned for light industrial uses, some office use, some research and development use as well as a mix of other uses and the zoning code was set up to require the town board to review and approve a development master plan for any building that occurs within an MED district,” said Leslie.

The reason for the additional oversight is reportedly to “encourage the treatment of individual lots as part of an integrated plan for development of planned office, industry, service, small scale retail, and technology based businesses,” he said.

After issuing the negative declaration resolution, the board is required to schedule a public hearing to solicit public comment on the project. “They will listen to the public comments and staff will respond to those comments at the meeting, if necessary, or maybe we’ll have to look further into those comments and come back at a second meeting to address them,” said Leslie. “At some point, the board will consider approval.”

If approved, the applicant is then required to submit a separate site plan proposals for each individual building within the master plan for review and approval by the planning board only.

“That’s when we get into a more detailed review of that site,” said Leslie. “The master plan affords a higher level of review—rather than the full detail that a site plan requires.”

Due to the fact that the project will disturb more than 10 acres (approximately 12, in this case) of the approximately 27-acre parcel of land, it was deemed a Type 1 action under SEQR and has already required a coordinated review of the project by various state agencies, including New York State Department of Transportation (NYSDOT), Army Corps of Engineers and New York State Department of Environmental Conservation (DEC). The findings of these agencies were presented to the town board, along with the planning board’s recommendation that the board accept the master plan, and can be found on the town website.

Assuming all projects receive approval, said Mirel, Bethlehem residents can expect to see the first buildings up by the middle of next year. The public hearing on July 27 will take place at the town board meeting at 6 p.m.

CORRECTION: The previous headline to this story erroneously stated that the Town Board approved the site plan. That vote was not to come until after the July 27 pubic hearing.