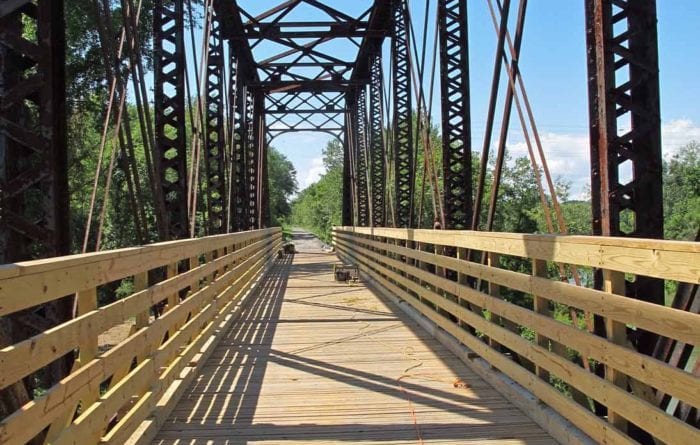 The converted train trestle is now a point of attraction on the Albany County Rail Trail. The rail trail will soon be the site of a charity run to benefit a local woman fighting cancer. Submitted photo

BETHLEHEM — The first charity run to be held on the Albany County Rail Trail comes to Delmar in two weeks.

Minnis is the mother of event organizer Corina Santoro, a Bethlehem resident for the past 12 years.

“I wanted to do something to help, and to show how cancer impacts finances so negatively, whether the person beats it or not,” said Santoro.

The Rail Trail, with its central location and newly paved trail provided the perfect location.

“It’s such a beautiful spot, and since the run won’t be held on a road, no streets need to be shut down. I pitched it to Albany County, the town and Bethlehem Police and got everyone’s approval very easily,” said the organizer.

Plus, with the mile-long walk component, Santoro is aiming for a family-freindly atmosphere, with participation available for all ages. Revenues this year will directly benefit Santoro’s mother, who was diagnosed with cancer just two months ago. Santoro hopes to hold the event every year, and donate to a different local person battling cancer.

To the event organizer, an avid runner and mother of three, donating directly to a person battling cancer was a way to help offset not only costs of treatment, but the myriad of other expenses that come along with a person’s fight for survival after cancer diagnoses.

“Donating to the American Cancer Society and other cancer organizations is fantastic,” said Santoro. “But in my heart, it was more important to donate to the individual lives, so that is what this was designed to do.” There will always be someone that needs financial aid because of cancer, Santoro said, so finding people to benefit from the future Cancer Crusher 5K runs she has planned will not be difficult.

This is fact is made especially true, as many people diagnosed with cancer can be either too ashamed, unwilling or without the tools to ask for financial help – a situation she has dealt with many times over, with her mother’s cancer diagnosis being only the most recent to directly impact Santoro’s life.

In March of this year, her mother Ellie Minnis was diagnosed with throat cancer – the same throat cancer that eventually led to her father’s death over 15 years ago.

Cancer had stripped Minnis bare when her husband died. Having barely enough income left over after dealing with the costs of treatment, Minnis managed to move from California to Ithaca, New York, close to where her sister lived. There, she remarried some years later and continued a life of charity work, giving to other through her job at a local nursing home and by donating her off-time to charities in her community, all before her cancer diagnosis made these acts impossible.

“Once again, cancer is stripping her bare,” described Santoro. “She faces daily radiation and periodic chemo,” which will cause her significant long-term damage to her teeth, throat and hearing. But, “Through it all, she smiles, she perseveres, she is determined to crush this cancer.”

While many will reach out to offer their emotional support and prayers after a cancer diagnosis, finding ways to aid financially (an impact felt just as much as the physical and emotional impacts) can be more difficult.

The medical co-payments for Minnis’ treatment are already large, and come with costs not covered by insurance, such as cost of travel. And, with Minnis no longer working and her husband having taken a leave of absense from his work to help her through the treatments, financing these costs is difficult.

“No one wants to say [cancer treatments] are taking all their money, but because I’ve seen it happen so many times,” said Santoro, who has also had close friends and close relatives diagnosed with cancer, “I know it’s a reality and something I can change. In the big picture, it would be awesome if this could become a model that people could follow.” Santoro envisions others holding their own Cancer Crusher 5K races (a name she coined herself) to aid their own friends and relatives through the financial burden cancer leaves. Santoro is hoping for a modest turnout of between 100 and 200 persons in the first year of the race, and hopes the event will grow in participation in the coming years.

The American Legion Delmar post will provide runners a parking lot for the event. Runners will begin at the trail head at the post, run to the right for half of the 3.1 miles, then turn around to complete the second half. Walkers will begin in the opposite direction, starting to the left at the trail head, then turning around halfway through the mile-long walk.

Similar trail runs have been held on other refurbished train track trails, so Santoro was not worried about whether the trail would have enough room for all of the runners. Grassy overflow space is also available to the sides of the trail.

With a month left to sign up, Santoro is working hard to get the word out, and is hoping that the town’s strong history of participation in local charity runs, alongside her run’s strong emotional ties will incentivize greater participation.

“Everyone knows someone who has been affected by cancer,” said Santoro. “Whether you run or walk, this event is something the entire family can get behind to make a difference.”

Albany County, the Town of Bethlehem and the Bethlehem Police Department have each given their support to make the event possible.

Registration for the event is $25 for both the 5K and mile-walk. Registration ends June 16. To sign up, visit runsignup.com/Race/NY/Delmar/CancerCrushers5k.