Slow and steady: Century-old barn moves to its new home across the street 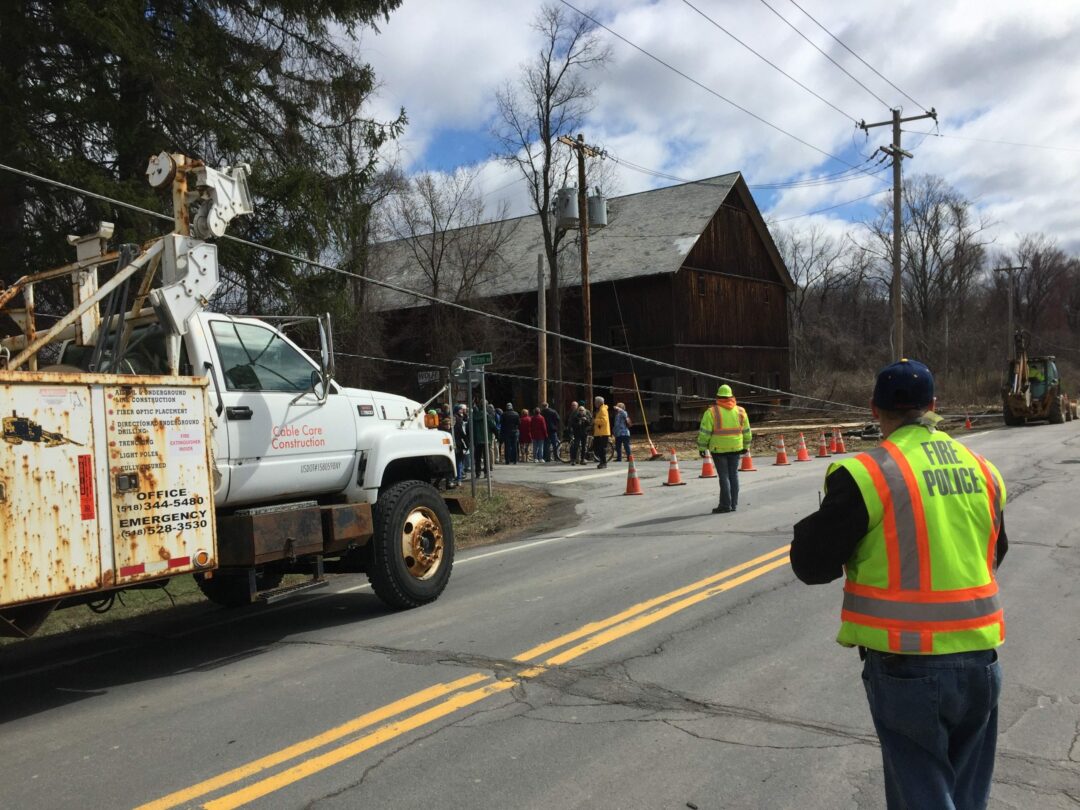 It’s not everyday when you can see a 100-year old barn cross the street. Nearly 100 residents gathered to watch as the Hilton Barn did just that on Tuesday, March 29. Tricia Cremo/Spotlight

NEW SCOTLAND — Close to 100 residents attended what is sure to be regarded as a pivotal day in the history of the Town of New Scotland: the day the Hilton Barn crossed the street.

Efforts that began over a year ago to save the over 100-year-old Hilton Barn at LeVie farm (one of the oldest barns in the Capital District) came to a victorious end Tuesday, March 29, when the barn crossed Route 85A, and was placed at its new home along the Albany County Rail Trail. Town officials, thanks to $250,000 in combined grants from the state and county, were able to save the barn from demolition by developers, who had been anxious to begin construction on the 28-home development at the Colonie Country Club – the barn’s former home. Had officials failed to succeed in moving the barn by April 1 – the developer’s original deadline – the structure would have been demolished.

A huge crowd of people, some of them children, came to witness the event on that early morning. “This is a historical event in itself so it counts for something,” joked mother Justine Abbott, who took her three children out of school that morning to attend the event. “We must have set a record for this kind of move,” suggested Town Historian Robert Parmenter.

The event saw a large section of 85A — a major roadway — closed for hours while the barn made its slow and steady journey across the roadway and across roughly one acre of land.

“This is what they call nice and easy,” remarked one resident at the pace. The barn moved mere inches in a slow few seconds, then stopped for several minutes, repeating this process until the barn reached the Rail Trail four hours after the process began. Then, the entire structure was rotated so that the large sliding door on the barn’s length-side faced the entrance to the Rail Trail.

A single man from the Pennsylvania-based historical barn moving company in charge of the move surveyed from the ground as small tractors moved planks in front of the barn so that it could be wheeled closer and closer to its destination.

Currently, the barn remains elevated on these wheels, now at its final destination. Town officials have 45-60 days to coordinate the next step: placing a foundation of cement beneath the barn.

“Everything went perfectly today,” despite worries about the move given the age of the barn, said New Scotland Town Board member Bill Hennessy.

“Structurally the barn was in perfect shape,” said board member Adam Greenberg. “Everything from the steel plates up. Everything was pretty much perfect, so once they put their steel beams across the bottom, that firms the entire structure.”

And, “Little to no surface grating required because the route chosen was so flat, and little clearing was needed,” said Hennessey.

“We tried to leave as many trees as we could, because once this becomes married to the rail trail, we want it obviously to have a rural feel and look,” said Greenberg.

Greenberg, Hennessey and their fellow board members Pat Snyder and supervisor Doug LaGrange, have worked tirelessly over the last several months to coordinate the extensive details associated with transporting the barn. Beyond applying for hundreds of thousands of dollars in grants and hiring the barn movers, the Town Board spent hours upon hours coordinating those behind-the-scenes details that the average spectator watching the barn move that day would never have thoughts about: insurance on the structure; coordinating the road closure with the state, which operates route 85A; coordinating cable companies to temporarily move their lines so that the extraordinarily tall structure could pass; and clearing the land, all while staying under a tight budget while there was no word on whether the grants had been approved, and all while keeping the looming April 1 deadline in mind.

“It’s been a crazy amount of work since Dec. 28 – it’s when George Kane, the holdout Hilton heir who was not selling the property, finally decided to sell it,” explained Councilman Greenberg.” For that entire year, the town was trying to find a new home for a barn, a way to save it. Kane refused to sell his piece of land across from the barn, adjacent to the Rail Trail. That is until, just after Christmas, when Kane underwent a sudden change of heart, just after former Town Supervisor Tom Dolin — shortly before his retirement — wrote Kane a letter urging him once again to change his position on selling his land. Though just a small piece of undeveloped real estate in a town full of undeveloped real estate, the land was the last remnant of his heirs the Hilton family – one of the town’s first settlers – that descendents owned.

“At that point, we had to decide if we could accomplish this by April 1, which was when the deadline was for getting it off its prior property,” continued Greenberg. “And we decided to move ahead, even though some people had warned that that was going to be impossible to accomplish.”

The Town of New Scotland reached out to Mohawk Hudson Land Conservancy, whose expertise in land ownership they utilized in acquiring the barn’s new home. “Our idea is that this will be a major amenity to the Rail Trail, a destination for people, and that’s really what we wanted to see is that the Rail Trail has all these attractions and more and more reasons for people to come out and enjoy it,” said Mohawk Hudson Land Conservancy (MHLC) Director Mark King, watching as the barn lay on the land he helped acquire. “Many times, it looked like it was going to fail. There are 28 houses going in right over there in a few days,” he said, referring to the land standing just across the street where the barn had sat mere hours earlier. “But at the last minute, it came through and here we are.”

Hilton expressed her excitement at watching the barn move. Though for her, the event was more personal, as it was her great, great grandfather, Civil War Captain Joseph Hilton, who raised the barn in 1898 with aid from 160 volunteers.

“It’s pretty exciting,” said Hilton, “but more so because the community has come together to save this thing. There’s a little more attachment, of course,” she said modestly, “because it’s sort of the last remnant of the Hilton farm, and that’s something that’s been part of the family. Ultimately, though, it’s more of a pride that this big thing will be serving the community somehow, and that’s ultimately what’s most important – the community and enjoying the history of this structure and coming together to use it.”

The move was made possible by a $50,000 grant from Albany County, and a $75,000 grant from State Senate via Senator George Amedore’s office. A $125,000 grant from the State Assembly, via Assemblywoman Pat Fahy, is in the process of being approved, “And Assemblywoman Fahy feels like it’s a pretty sure thing that that will go through,” said Supervisor LaGrange. The town may have some grant funds remaining to patch the barn’s roof, and make any other small repairs. Funds could also come from the town’s Park’s and Recreation fund, which is in excess of $125,000. The fund is made up of lot fees from developers, so utilizing it would come at cost to New Scotland residents, said LaGrange.

It’s passed: Drilling down the impact of the newly passed State budget