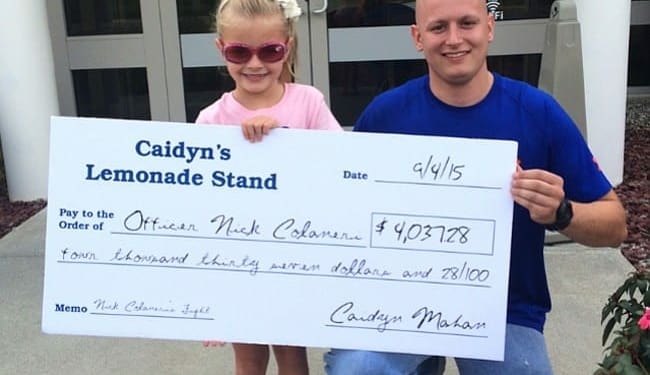 Caidyn Mahan presents check to Nick Colaneri for the more than $4,000 she raised to help the Hoosick Falls Police officer with his cancer treatment.

Six-year-old Caidyn Mahan, of Delmar, is tiny, blonde and already a philanthropist. At a lemonade stand she held recently, the first grader raised over $4,000 for a police office recently diagnosed with stage four Hodgkins Lymphoma — a rare form of cancer.

“I just made a post on Facebook earlier in the day and then all of a sudden there were all these people,” said Caidyn’s mother Kristi Mahan.

By the end of the day the photo had been shared over 400 times, and hundreds of people had visited the lemonade stand held Wednesday, Sept. 2. Some had travelled as much as 35 minutes for a taste of her delicious and charitable drink.

All proceeds benefitted Hoosick Falls Police Officer Nick Colaneri, 25. Colaneri will soon be paying all his chemotherapy treatments and travel expenses out of pocket.

As Colaneri is about to turn 26, he will no longer be carried by his parents’ insurance. Because he just began a new career in law enforcement, he does not receive benefits from his work at the police station, as he is a part-time employee.

“Nick is of wonderful character and humility and would never ask for this financial help,” said Marty Furch, a friend of Colaneri’s and the creator of an online gofundme campaign, which benefits his treatments.

Colaneri himself had planned to visit the lemonade stand, but fell ill and was admitted to the hospital earlier that day. On Friday, Sept. 4, the Mahans met Colaneri for the first time and presented him with a large $4,038.00 check, donated by Delmar Printers. That total sum includes a matched donation of $2,000 from Caidyn’s grandfather, himself a retired police officer.

In exchange for her efforts, Nick Colaneri gave the six-year-old a few small gifts related to with her favorite movie “Frozen.” Caidyn wore her new “Frozen” watch, from Colaneri on her first day of first grade on Tuesday, and “hasn’t let go” of her Elsa doll and “Frozen” sunglasses, said Kristi Mahan.

“This really hit home with us,” said Mahan. “Nick is around the same age as my husband, so our hearts went out to him. It’s hard to imagine.“ At 26, Kristi’s husband Bryan Mahan has worked at the Bethlehem Police Department for over two years now.

Caidyn understands somewhat the gravity of the situation. When her uncle was diagnosed and died from cancer, her parents explained to her what the disease was. Even if she doesn’t understand completely the effect that cancer can have, she does understand a need for help.

“We really believe that kids need to know importance of giving back to others,“ said Mahan of her and her husband’s parenting philosophy. The pair helped with Caidyn’s first lemonade stand last year. The $400 she made then was donated to the non-profit organization Alex’s Lemonade Stand, which benefits patients of childhood cancer.

Since she was three years old, Caidyn has been giving back to others with the help of her mother and father. Kristi Mahan said that she and Bryan help guide Caidyn whenever she becomes interested in giving back, with past projects including making blankets for babies in the neonatal intensive care unit and making valentines for patients in the children’s care unit.

The online fund for Colaneri, alongside offering him financial support has also been a place for others to offer moral support. Many community members, especially those with ties to the police departments, have made efforts to support him.

Retired NYPD office Tom Kartelias gave his advice on the site. Diagnosed with stage four Hodgkins Lymphoma and kidney cancer five years ago, Kartelias told Colaneri to “keep your chin up, stay positive, listen to the doctors and hopefully you will be in remission in no time.”

Local groups as well have shown their support, with many having appeared at Caidyn’s lemonade stand. Delmar EMS, police officers from Albany and Schenectady and the Selkirk Fire Department all made appearances.

Lemonade supply donations were made by Shop Rite and Price Chopper. The rest of the lemonade — which, technically speaking, was free with an open donation bin — was paid for by the Mahans.

All-in-all, over 200 people came to the lemonade stand, held a short distance from the Mahan’s home at the corner of Hudson Avenue. and Adams Place, in Delmar.

Colaneri said he, “cannot thank everyone enough for this support you all have been showing.” An aditional event benefiitting Colaneri, an outdoor block party, was also held Saturday, Sept. 12 in Troy.