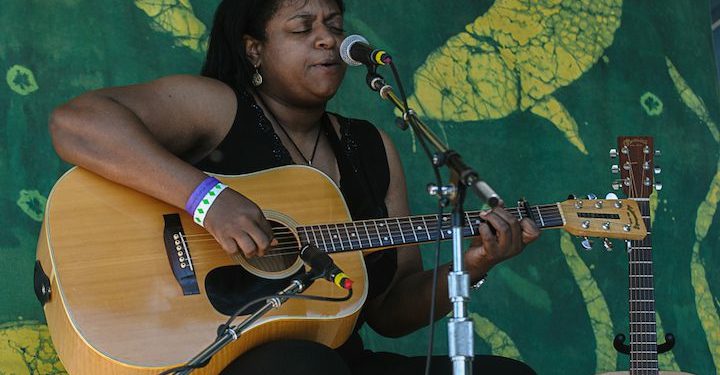 Thomasina Winslow, a local legend within the area blues and Americana scene who followed in her father’s footsteps by picking up the guitar, died on Friday, Jan. 13, at the age of 53.

Tom Winslow’s daughter was destined to be a musician. She was just a toddler when she made an appearance on his eponymous debut release in 1969. Where her father’s legacy would intertwine with Pete Seeger and his endeavor to advocate for the Hudson River’s health, she would later be a regular performer at the Great Hudson Revival festival and share time with Seeger, too.

“She was not only an incredible singer, guitar player and band leader, but she was also one of the world’s best people,” wrote WEXT Program Director Chris Winke. “Her spirit and enthusiasm were infectious. Her creativity knew no bounds. We could all learn something from her, even if we didn’t know how to hold a guitar.”

In 2019, Thomasina earned an Eddies’ Music Award nomination for that year’s Blues Artist of the Year. Her fusion of acoustic guitar-driven blues and pop captivated audiences across the globe, including Germany, England and Australia. The Capital District native was just as likely to hit area stages from Hudson Valley Community College to the venerable Caffé Lena, especially while with her band, Nite Train. Ken and Maria Briggs wrote a eulogy for her on the band’s website.

“It is with heavy hearts that we announce the passing of our dear friend and bandmate, Thomasina Winslow,” they wrote. “She was a brilliant light in this world, and now we will continue shining her light by carrying it within us in our own lives.”

Thomasina was in the studio, recording her latest release “Return,” when she was nominated for an Eddie in 2019. She had told WVCR’s Darrin Kibbey that the accolade, which placed her among the best blues artists in the region, reenergized her.

“It galvanized my efforts,” she said in the 2019 interview. “I put the pedal to the metal even more.”

She had been active within her community, organizing a music festival and performing on local stages.

Nite Train has scheduled a tribute show at Caffé Lena on Saturday, Feb. 4. It had been preparing to celebrate 20 years together in 2023. According to the band’s statement, it will continue to perform so the band can “remember and honor Thomasina at each and every performance we have.”

Details of a future memorial service were not immediately available, though one is expected to be held within the next few weeks.