The Purple Pub to close its doors after 50 years 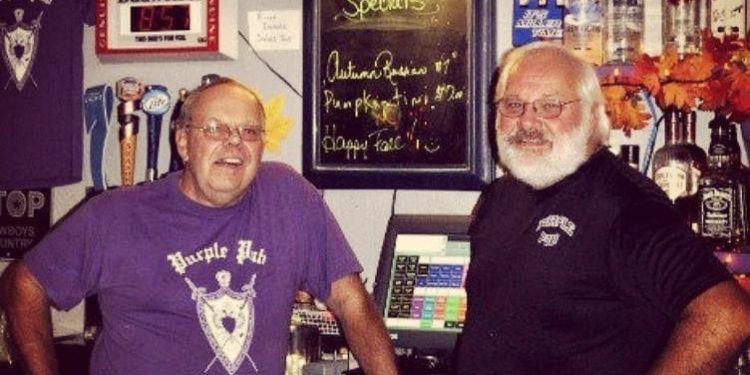 WATERVLIET — The Purple Pub is closing its doors after 50 years in business.

With “incredibly heavy hearts,” owners Greg and Butch Rentz announced they will close the restaurant to on-site on Friday, Dec. 30. The Purple Pub To-Go service, however, will remain operational.

“As the old saying goes, ‘All good things must come to an end’ and after 50 long, successful, and beautiful years, that end is now here,” the two stated in an online statement shared on Wednesday, Dec. 14. “It’s simply time to ‘take a break’, to prioritize our health, and to be able to spend time with our wonderful families.”

The family opened the popular restaurant at 2 Cohoes Road in 1972, just north of downtown heading towards Cohoes. As one Yelp reviewer described it in April, it was an “old school tavern” with little frill to distract patrons from what it was.

“The decor hasn’t been touched in decades, and I don’t think much else has changed either judging by the stories my friends were telling me about the place,” wrote the reviewer. “Everything was good in its own right and I get why people keep coming back. … This is a family joint that has been kept in business for decades by devoted locals, and I am not one to hate on tradition.”

Scores of faithful patrons shared their stories and gratitude for the restaurant. Within three days, the eatery’s Facebook announcement garnered more than 500 comments from past customers, many of whom represented generations who have passed through the doors.

“Been going there since I was a kid with my parents. I’ve brought my own kids there also,” said Mike Sullivan. ”Sad to see you go but you were truly a family-friendly restaurant always..Good luck in your well deserved retirements.”

Troy’s Vito Ciccarelli said he often crossed the Hudson to visit, and had been for years.

“Being I’ve been a loyal customer since the day’s of a $1.75 club sandwich, I wish everyone all the best. This is very upsetting news to hear,” he said.

The pub’s announced closing comes nearly two years after the Rentz surprised followers with a similar social media post. The clamor that followed prompted them to clarify that they were not closing.

“This is more than likely the direct result of two old guys not knowing the power of social media.”

The last three years have grown difficult for restaurant owners. The Rentz alluded to labor laws changing overtime, split shifts and minimum wages among their reasons to retire. A lingering pandemic that has led to labor shortages and supply chain issues has also contributed.

“But, in our heart of hearts, we know the most important reason of all – it’s simply time to ‘take a break,’ to prioritize our health and to be able to spend time with our wonderful families,” the two shared in their note to customers. ”It has been an absolute honor to have served each and every one of you over the past 50 years. There is nothing in this world we could have ever done that would have brought us the same pride and joy that the Purple Pub has brought to all of us – we could never have been ‘us’ without all of ‘you’.“