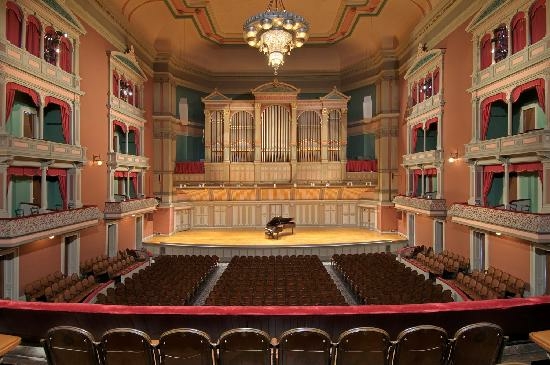 TROY — Attendees of the Scottish Chamber Orchestra on Thursday night heard one of the world’s best musicians play one of the finest instruments ever built at Troy Savings Bank Music Hall.

The Troy Chromatic Club is celebrating 125 years of bringing classical music to the Collar City, most often to the venerable music hall on 2nd Street. Thursday evening, the club’s second concert of the season, showcased the Scottish Chamber Orchestra, fronted by its animated young conductor, Maxim Emelyanychev. In addition to promising the performance of Anna Clyne’s Beethoven-inspired “Stride,” the night was to also include Grammy Award-winning violin soloist, Nicola Benedetti.

Clyne is a gifted composer known to use various mediums before finishing a piece of work. For her Grammy Award-nominated composition “Night Ferry,” she fixed seven canvases upon the wall, painting the music as she wrote it. “Stride” was one of three pieces in which she was commissioned to write, celebrating Ludwig von Beethoven’s 250th birthday in 2020. As played by the chamber orchestra, there were elements familiar to the late composer’s “Sonata Pathétique,” from which she drew inspiration. A Bachtrack reviewer once tied it to Alfred Hitchcock’s film, “Psycho,” as it reminded them of the infamous shower scene. Just a few weeks from Halloween, it sounded like an appropriate choice.

Audiences are gifted by the musicians’ subtle gestures while watching an orchestra perform in person. In addition to the conductor’s direction, you can spy players as they watch for each other’s cues. Benedetti strode across the stage behind Emelyanychev as he ushered her to the front of the stage. She appeared to smile as she took notice to a few people seated in the front row before proceeding to close her eyes to play Max Bruch’s “Violin Concerto No. 1.” Her instrument’s distinguishably sweet tone resonated throughout the room. If she took direction from anyone else, it wasn’t apparent: the young virtuoso was on another plain.

Benedetti’s violin is a story in and of itself. The decorated musician plays a Stradivarius, particularly the Gariel Strad of 1717, loaned to her by Bank of America president, Jonathan Moulds. Of the 600 or so violins crafted by Antonio Stradivari that are still around today, Benedetti’s instrument is considered by experts to be among his 30 best violins. In 2012, it was valued at $6.3 million. When she plays with orchestras, she says, players from the violin section often crowd her to ask about it.

She brought the audience to its feet, the first of three standing ovations; another example of world-class talent brought to perform here in the Capital District. The venue’s challenge to fill more of its seats on a Thursday night was likely accentuated by the stormy weather or volatile economy. Those who did attend, however, witnessed history.

New Halloween fest for Albany in 2023